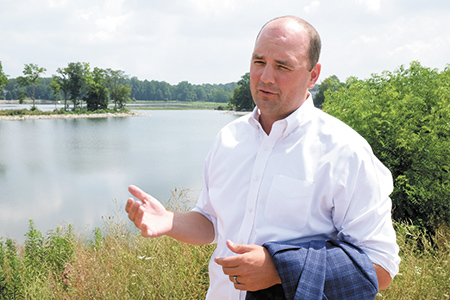 For decades, 70 acres along Geist Reservoir in Fishers have sat largely undeveloped. In Mayor Scott Fadness’ mind, they’re prime for a park—one that will open the largely private lake to the public.

Soon, that vision could start to become a reality.

Irving Materials Inc. will cease operations at the end of the year at the site, east of Olio Road between 113th Street and Waterway Boulevard, where it’s operated a quarry for years.

And Fishers officials say they’re launching a public process to develop the park and will begin prepping the site to be turned into a beach.

The meetings and work come more than a year after Fadness announced plans to build a 70-acre waterfront park at the far-east end of the reservoir, one that could feature a beach, boardwalk, boat launch and other amenities.

But the city couldn’t really start on the project until it completed its purchase of the land, which had been owned by Greenfield-based Irving Materials and Indianapolis-based Marina Limited Partnership. That happened earlier this month.

Now, the city is preparing to move forward.

The 1,900-acre Geist Reservoir was man-made in the 1940s to provide drinking water to Indianapolis. Some 40 years later, expensive homes popped up along its banks, which touch Hamilton, Marion and Hancock counties.

The IMI site was poised to be developed into 100 more homes before Fishers stepped in, purchasing the land for $15.8 million, a price determined through an eminent-domain proceeding.

The Fishers Redevelopment Commission on July 12 approved a resolution authorizing the city to begin developing the park and approved an agreement that gives IMI until Dec. 31 to move out.

Simultaneously, Fishers Deputy Mayor Leah McGrath hosted the first in a series of stakeholder meetings that will take place in coming months to draft plans for the project.

“It’s been a year, but now we’re moving forward,” Fadness told IBJ this week as he toured the property.

Fadness said when he and his wife take their boat on the water, they often pass the site, and he has long thought the property could be something more.

Currently, Fishers residents who don’t live along the reservoir and own a boat (or know someone who does) have little access to the lake.

Families can stand along a bridge on 116th Street and watch others enjoy the water, or they can use one of the boat ramps open to the public, which includes a fee.

Beyond that, the reservoir is largely closed to the public.

“We want to provide an asset for the entire community,” Fadness said.

He described the land acquisition process as Chapter 1 of the project. Chapter 2 focuses on planning what the park will look like for the next 50 years, he said.

Over the next few months, residents who live nearby and other stakeholders will be invited to have conversations with city leaders to share their visions for the park, McGrath said. 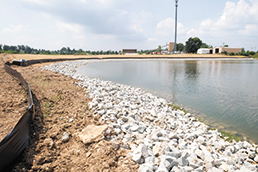 By fall, the city hopes to host two to three open houses for the greater community to share their ideas, and by early next year, leaders hope to have a design to share with the public.

The park won’t be built overnight—some development might be years away—but the city hopes residents are able to begin using the beach in the next few years, McGrath said.

Having a final design for the park in hand will give city leaders a better idea of the cost of developing it and how long it will take to complete, she said. 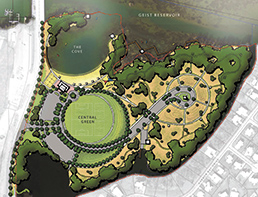 An early conceptual design of the park shows some amenities that could be included in the final plan, which leaders hope to complete early next year after meetings with stakeholders and the public. (Rendering courtesy of city of Fishers)

Conceptual designs show some of the possibilities: an amphitheater, a fishing dock, a public beach, a boardwalk and opportunities for kayaking and paddle boarding.

City leaders hope the park provides connection to other public spaces by creating a waterway trail system that will be unique to central Indiana, said Fishers spokesperson Ashley Elrod.

Geist Park, Fishers’ new AgriPark, the Geist Greenway—a trail being built now that will cross Fall Creek—and the lakefront park will all eventually be connected by water.

The park could also provide environmental-education opportunities, McGrath said, and she hopes to include Hamilton Southeastern Schools in the planning process.

What you won’t see at the park is commercial development for retail or another marina for motorized boats, McGrath said. 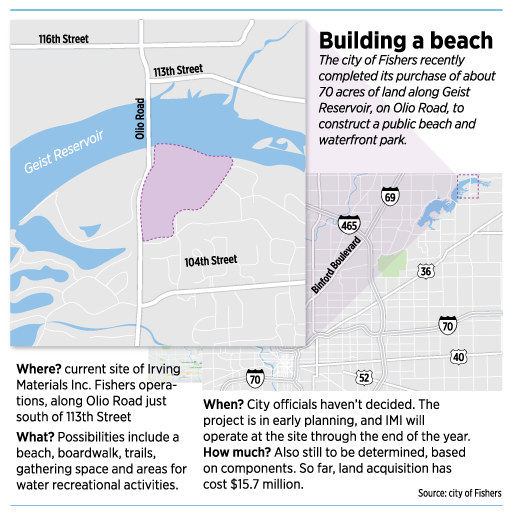 “This is a place where we really want our residents to have an opportunity where they can come and engage with the water, have a picnic by the lake, more of a natural setting,” she said.

“We’re sort of giving this land its next chapter is how I look at it.”

The city intends to preserve many of the existing trees and natural barriers, Elrod said.

The property today is full of beautiful wildlife, McGrath said.

While city leaders were visiting the site recently, a deer ran nearby and a pair of heron waded in the water. Officials say they want to maintain that feel.

Right now, the site is in its rough form, Fadness said.

IMI trucks are still parked on the property and much of it is gravel.

The portion of the lake that would be developed is very shallow in part because of the watershed created by farming and construction.

Citizens Energy Group, which is building a $20 million reservoir across the street from the Fishers property to meet projected central Indiana water needs, has started dredging—the process of scooping out mud from the waterway’s bed—and moving the soil to the property Fishers bought.

The city has significant dredging of its own to do, which will take place in the next year or so, Fadness said.

The soil that brings up will be used as a natural conditioner for the ground where the park will be built, which will help in the city’s effort to convert it into green space.

“Securing this land so it’s not developable allows us now to take the time, take a deep breath, and really figure out what makes sense for the long term,” he said.

“And then we’ll fit our financial plans accordingly.”•