Republican U.S. Senate candidate Mike Braun continues to pump money into his campaign, and appears to be engaging in the controversial but legal practice of using donations meant for retiring debt from his primary race to boost his general election campaign.

Braun, who is challenging Democratic incumbent Joe Donnelly in November, loaned his campaign millions of dollars during the primary season, saying he wouldn’t be beholden to special interest groups in Washington, D.C. 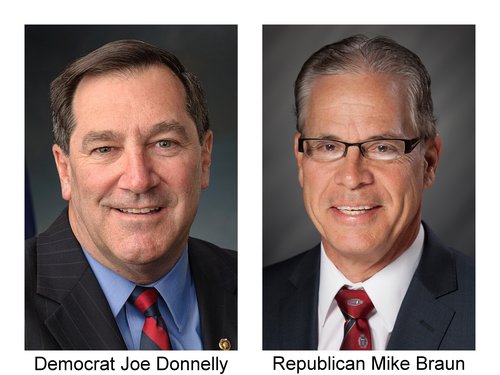 Since the May 8 primary, Braun has indicated that he has shifted from that strategy and has been attending out-of-state political fundraisers. In a press release sent earlier this month, Braun touted raising $2.5 million in the second quarter, including $1.5 million since the primary “without personal contributions or loans.” The second quarter began April 1, but the primary took place on May 8.

In the same time period, Donnelly raised $1.7 million without any personal loans or contributions. Donnelly has nearly $6.4 million cash on hand, while Braun has about $1 million.

About $270,000 of the donations Braun received from individuals and political action committees in this time period were intended to help him recoup the money he loaned himself in the primary.

Federal campaign finance law allows donors who did not max out their primary election contributions to donate up to $2,700 for debt retirement, in addition to the $2,700 they are allowed to give for the general election. PACs are allowed to give up to $5,000 for debt retirement if they didn’t already max out during the primary, and an additional $5,000 for the general election.

The Federal Election Commission requires that donations made for debt retirement be used for that purpose, but Braun seems to be working around that rule.

The campaign reported making four loan repayments to Braun totaling about $93,000 between May 29 and June 25. Within several days of each payment, he personally issued his campaign new loans for the same amounts.

Michael Feldman, spokesman for the Indiana Democratic Party, criticized Braun for the practice.

“Not only has Rep. Braun been lying to Hoosiers for months about not-self funding in the general election, but it appears he’s skirted campaign contribution laws to raise double the legal limit per election from his special interest donors," Feldman said in a statement. "It’s simply the latest example that he’ll do whatever he can to extract every last dollar for himself with complete disregard for rules or ethics.”

The move is similar to what Matt Rosendale, the Republican U.S. Senate candidate in Montana, recently did.

Rosendale, who is running against Democratic incumbent Sen. Jon Tester, appears to have taken donations to pay off personal debt from his unsuccessful 2014 campaign for U.S. House and then re-loaned the funds to his current campaign.

The AP reported that on May 14 Rosendale wrote a check for $32,831 to pay off debt from the 2014 campaign, and the next day, he loaned his new Senate campaign the same amount.

Brendan Fischer, an attorney with the nonpartisan Campaign Legal Center, told the AP that Rosendale’s actions were “a legal form of money laundering in order to help a handful of wealthy donors get around federal contribution limits.”