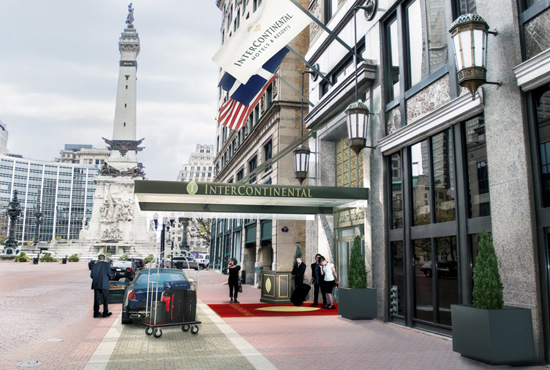 Department of Metropolitan Development staff members say the projects together would create 700 temporary construction jobs and 753 permanent full-time jobs while providing a "higher and better use" for two properties that have been of "limited contribution to vibrancy in the Mile Square."

The DMD is recommending that the city provide $16.7 million to help finance construction costs. The money eventually would be paid back by tax dollars the projects generate. The financing proposal is scheduled for consideration at an Indianapolis City-County Council committee meeting on Monday night.

Thomas Cook, chief of staff to Mayor Joe Hogsett, said Keystone officials have “been chomping at the bit” to start working on the project as soon as they receive needed approvals.

“Both the Illinois Building and the AT&T building are in a part of downtown that’s doing well, but they are largely vacant structures and that doesn’t benefit the city,” Cook told IBJ. “For that corridor, it’s a really big deal to have some momentum on that end of downtown.”

The projects represent a huge bet on downtown by Ersal Ozdemir, 44, Keystone's founder and CEO, a native of Turkey who got into the construction business after receiving a civil engineering degree from Purdue University in 1997. Ozdemir, one of central Indiana's most prominent developers, also owns the Indy Eleven professional soccer team.

The Illinois Building, 17 W. Market St., which dates to 1926, is less than a block from Monument Circle and is considered “endangered” by Indiana Landmarks. Keystone bought the property in 2013 and began rehabbing the 10-story building, starting with the ground floor. Chicago-based pizza chain Giordano’s and Cleveland-based Hyde Park Prime Steakhouse, which both opened in 2016, are the only occupants in the building, which hasn't had an office tenant in more than 15 years. 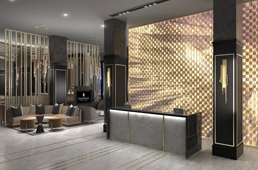 The lobby of the Intercontinental would be opulently appointed. (Rendering courtesy city of Indianapolis)

Keystone has signed a license agreement with Intercontinental Hotel & Resorts to occupy the 145,000-square-foot building. The hotel would have 180 rooms, and Keystone would seek to add two additional restaurants, as well as add an 11th floor that would house a rooftop restaurant and bar offering views of Monument Circle.

Founded in 1946, Intercontinental is considered the world’s first international luxury hotel brand. There are about 180 Intercontinental Hotels in 60 countries, but only 26 in the United States. The nearest is in Chicago.

The hotel will be “really like nothing else we have currently in the market,” Jasmin Shaheed-Young, vice president for Keystone, said in a Aug. 22 meeting of the Indianapolis Economic Development Commission.

The rooftop restaurant bar is “something we need in our city,” Shaheed-Young said. “If we would have had something like this with the Super Bowl here, imagine the celebrations and parties that we would have had.”

Indianapolis-based Ratio Architects will serve as the architect on the project.

Keystone said it anticipates starting construction in the fourth quarter, with the project lasting 12 to 14 months.

The project will “really activate a corner that is key to downtown,” said Ian Nicolini, vice president of the Marion County economic development group Develop Indy.

Cook said upcoming events in the city could provide an incentive for the project to be completed as soon as possible.

“Any hotel developer in the city that looks ahead at the slate of large events we have [coming up], there’s a vested interest to take advantage of some pretty marquee opportunities,” Cook said.

Previously, Keystone sought to put a Canopy by Hilton hotel in the building, but that deal fell through.

The goal of the renovation of the AT&T 220 Building is to “create a truly mixed-use structure,” Shaheed-Young said.

Keystone is hoping to start construction on the 555,453-square-foot office building immediately and will have a 24-month construction timetable. CSO Architects will serve as the architect. 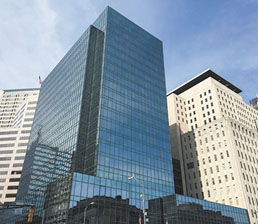 The AT&T 220 Building is on the northwest corner of Meridian and Ohio streets. (IBJ Photo)

Keystone purchased the building last year from Cleveland-based Geis Properties. Geis bought the structure for $16.5 million in May 2013 from AT&T, but struggled to find tenants for the property, citing lack of dedicated parking for occupants. Some of the office space is now occupied by AT&T, but Keystone said it is working with the company to facilitate a move.

About $5 million of the project cost will go toward creating a 317-space parking garage on the second, third and fourth floors of the building.

Besides parking, another key to reviving the building is attracting restaurants and retailers to the first floor. About 11,000 square feet would be dedicated to retail and another 6,100 to eateries.

Keystone will invest in redesigning and redeveloping the plaza on the ground level to “create an extremely exciting pedestrian experience for those that are walking by that area," Shaheed-Young said.

“If you ever walk by past 5 p.m., it’s somewhat dead,” she said. “We’re proposing to create some vibrancy and activity that will stretch even further north of Monument Circle.”

Of the 160 planned apartment units, 32 would be set aside for workforce housing, meaning that they will only be available to rent by people who make between 80 to 100 percent of the area median income.

The building dates to 1974, when it opened as the headquarters of Indiana Bell, which eventually became AT&T.

The city's $16.7 million financing contribution to the project would come through so-called “bond anticipatory notes,” which work similarly to bonds, but are anticipatory short-term securities, issued under the assumption that the city issues actual bonds within five years.

The city eventually could issue about $17.5 million in developer-backed bonds to help finance the project, meaning that the developer would be on the hook for shortfalls if property tax revenue fell short of projections.

Cook said bond anticipation notes are a “key tool” behind the planned 16 Tech innovation and entrepreneurship district on the near-northwest side, as well as the Hyatt House hotel project, which is under construction across Pennsylvania Street from Bankers Life Fieldhouse.

In return for its financing help, the city is getting a 5 percent equity stake in the Intercontinental Hotel, a similar arrangement to what it has at both the Conrad Hotel and the JW Marriott.

In those cases, Indianapolis Bond Bank director Sarah Riordan said, “The city made significant investments in both projects back in the day and one of the visions was if they ever reached a certain point where they’re meeting certain thresholds [in revenue], they’re going to kick some of that back to the city.”

“In this agreement, we have something similar,” Riordan said.

However, it’s unknown when the city could start receiving revenue. Keystone told the Indianapolis Economic Development Commission on Aug. 22 that the hotel’s revenue should stabilize about four years after opening.

IBJ reported in 2017 that as a result of the city's 8 percent Conrad stake, it had received $1.2 million since 2010, which was four years after the hotel opened. As of last year, it had not received anything yet on its 25 percent JW Marriott stake. That hotel opened in 2011.

Cook said the expectation is that the city eventually would see revenue from the Intercontinental project.

“We thought that as a matter of policy, that if the city was going to participate in a substantial way in facilitating a redevelopment project, that taxpayers be treated as equity partners and have the opportunity to recoup the benefit that’s inherent in a profit-generating enterprise,” Cook said.