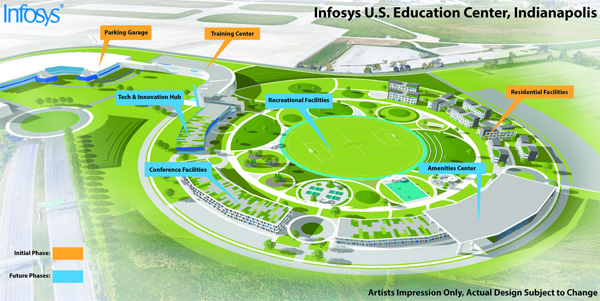 Tech company Infosys’ plans for a 132-acre educational campus at Indianapolis International Airport took an important step forward on Friday when airport officials approved an agreement to sell the property to the city of Indianapolis.

Under the terms of the agreement, the airport authority will sell the property to the city at its appraised value in phases over the next several years at an estimated total price of $21.4 million.

In the first transaction, which is expected to close by the end of the year, the city will pay estimated $4.4 million for the 58 acres (near the site of the airport's old terminal) that make up the first phase of the project. The city will then sell the property to Infosys for $1.

Exact figures for the acreage and the sale price to the city will be available once a survey of the property is complete next week, said the airport authority’s property director, Eric Anderson.

The airport will sell the 4.3-acre parking garage to the city for $12 million under a seven-year contract, with payments expected to begin in 2020 after the airport completes an estimated $8 million to $10 million in contractually-required renovations to the garage.

“It’s going to take us all of next year to renovate the garage,” Anderson said.

The city will sell this parcel to Infosys for $1 as well.

The airport authority will also grant the city a 10-year option to purchase another 74 acres for future phases of the Infosys development. Should the city exercise that option, the land will be reappraised at that point, Anderson said.

The property sits between High School Road and I-465, as well as the parking garage to the west that served the airport’s old terminal.

In April, Infosys announced it planned to build a $245 million campus to be built in phases over the next several years.

The campus will serve as a tech and innovation hub that Infosys says will employ 3,000 people, and it will include short-term residential facilities for students who visit the campus for training. Infosys currently occupies space in the OneAmerica building in downtown Indianapolis.

The sale of the 58 acres to the city still must gain approval from the Federal Aviation Administration and the city’s Department of Metropolitan Development. Anderson said those things are expected to happen, and the deal is expected to close, by the end of the year.

The city is acting as the intermediary in this deal because, per FAA rules, if an airport sells off land it must do so for the appraised price of the property. So it’s selling its acreage to the city at appraised value. Then the city is free to sell to Infosys for a nominal amount.

“By engaging in this public-private partnership, the city is helping to return the property to the tax rolls, while creating thousands of new jobs on the city’s west side,” said Taylor Schaffer, Mayor joe Hogsett’s deputy chief of staff.