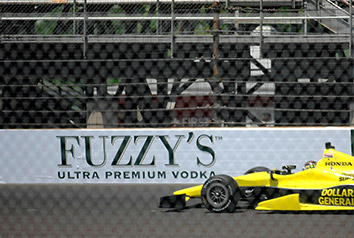 ECR said in a written statement that Fuzzy’s Vodka decided to end “one of the most recognizable partnerships in the IndyCar Series” to “concentrate on business initiatives outside of motorsports moving forward.”

Fuzzy’s first sponsored Ed Carpenter’s IndyCar entry at the Indianapolis 500 in 2010 and became the primary sponsor of the team in 2012.

The company also has partnered with Indianapolis Motor Speedway as the “official vodka” of the Indianapolis 500 and the Grand Prix of Indianapolis. It has produced several IndyCar-related commemorative bottles of vodka over the years and sponsored suites at IMS.

ECR said the loss of the sponsorship would not affect its plan to compete full-time in 2019 with two cars driven by Spencer Pigot (No. 21) and Carpenter (No. 20), who is the only owner/driver in the IndyCar Series.

“I am very appreciative and proud of the relationship between ECR and Fuzzy’s, really going back to before the team began,” Ed Carpenter said in written comments. “ It has been a good run and I wish them nothing but the best with their future endeavors.”