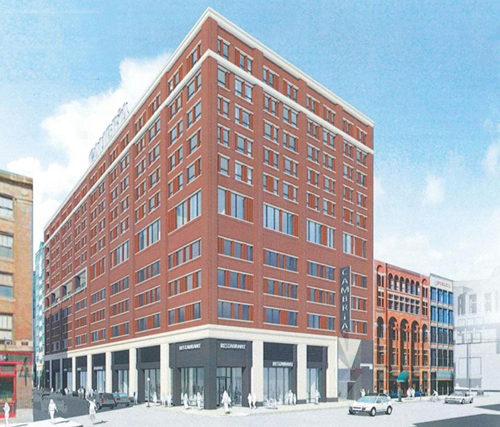 The developer of a proposed $22 million hotel that sought to add 150 rooms in downtown Indianapolis has scrapped the project, citing extensive costs.

Plans for the 11-story hotel, announced in 2015, were called off after Sun evaluated the costs associated with the building, CEO Bharat Patel said Monday.

““We got the pricing for all the components, and it just doesn’t make any sense to build that expensive of a building,” he said. “It’s cost-prohibitive.”

Indianapolis-based Sun Development, which bought the property for $4.23 million in September 2016, was developing the project for Rockville, Maryland-based Choice Hotels International. Choice Hotels sold the land to Sun after acquiring it in January 2016 from The Palace at Union Station for $3.4 million.

Work on the hotel—which had been slated to be built on the lot at the northwest corner of South Meridian Street and Jackson Place, just south of the Old Spaghetti Factory that occupies Station Place—was expected to start sometime last year, but never started.

The lot continues to be managed by Denison Parking, though Patel said he hopes to sell the property in order to recover money that's already been spent on the project for engineering and design costs. He said he could see another developer building apartments, condominiums or even a parking garage on the site.

Patel declined to say how much Sun Development has spent on the project, nor would he disclose the the asking price for the property, other than to say the company is “accepting offers.”

“There was a lot of money spent on it,” he said. “We have to make sure we (recoup) all that money.”

Sun Development had a final design for the hotel approved in July 2016 by the Indianapolis Historic Preservation Commission, with the firm opting for a more traditional look than a contemporary design presented the previous December.

The updated design by Indianapolis-based Ratio Architects Inc was approved unanimously, and was noted as a big improvement from the previous proposal in terms of aesthetics. It included parking inside the building, on its second through fifth floors, and retail space on the ground floor, with the lobby on the sixth floor.

Patel said Sun Development is still moving forward with plans to convert the One Jackson Square building, adjacent to Union Station, into a 110-room boutique hotel. Patel bought the building for nearly $2.62 million in July 2016, but has declined to say how much the project will cost.

The hotel, just a few hundred yards away from the canceled Cambria Project, is expected to be a Hilton-branded property. Patel did not elaborate on the current plans for the building or a timeline for when it is expected to open.

Jackson Square was previously a hotel and is on the National Register of Historic Places. Most recently, it served as office space for Loftus Engineering, Indiana Family Health Council and Borns Management Corp. Ike & Jonesy’s restaurant also is on the ground floor of the building.

In addition to the Jackson Square project, Sun Development is overseeing several other projects in Indianapolis and elsewhere, including the redevelopment of the former Bethel African Methodist Church building at 414 W. Vermont St. on the west side of downtown. That project calls for two hotels, with the church being converted into one and a second being built on a lot facing West Street.