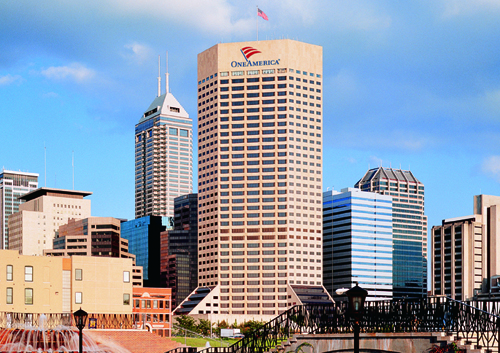 Central Indiana faces a deficit of good-paying, middle-class jobs—especially for people without college degrees, according to a new report from the Brookings Institution.

The report's findings have led one top Indiana employer—OneAmerica—to promise to lift the salaries of more than 100 of its lowest-paid workers. The company did not say how much that would cost but the amount will be part of a larger $7 million investment in salary increases companywide. Officials at the Central Indiana Corporate Partnership—which sponsored the report—hope other local companies and organizations will make similar moves.

The report, called “Advancing Opportunity in Central Indiana,” examined the region’s economy in light of the rapid changes in global trade and technological change and found the area needs about 118,000 more of what it calls “good” or “promising” jobs to meet the needs of workers.

Good jobs are ones that provide middle-class wages and benefits, meaning at least $37,440 per year or $18 per hour, while providing employer-sponsored health insurance. Promising jobs are entry-level positions that do not meet that criteria, but that provide advancement opportunities that enable workers to reach good jobs within 10 years.

Currently, 51 percent of central Indiana’s jobs, are neither good nor promising, “meaning they provide insufficient pay or benefits and no viable pathway to good jobs,” according to the report.

And the problem is especially acute for potential workers without college degrees. Of the 1.03 million jobs in the region, only about 26 percent are good or promising jobs that can be held by workers who don't have a four-year college degree.

Officials at Indianapolis-based life insurance company OneAmerica saw the Brookings findings and decided to introduce a new program, OneAmerica Pathway to a Sustainable Income, which will allow associates on the lowest end of its pay scale who have been employed for three years or more to earn at least $37,440 annually.

OneAmerica identified 104 positions—primarily those within its call center and print and mail rooms—that don't meet the “good job” criteria, as listed within the Brookings report. That prompted company leaders to make the $7 million investment to lift those wages.

“We’re one of the top-performing companies in our industry, and this program is the right thing to do for our lowest-paid OneAmerica colleagues who have committed their working lives to the company’s success,” said OneAmerican Chairman and CEO J. Scott Davison in a statement.

CICP President and CEO David Johnson praised One America’s announcement, calling the company “a trailblazer toward these efforts.”

He said that in some industries, competition for talent drives salaries higher. "But as you see with OneAmerica and that example, part of it is the need for employers to decide they want to make this happen," he said.

The Brookings report recommends that local leaders focus economic development efforts on growing so-called opportunity industries, which can “increase the number and share of good jobs in the region, in turn creating more pathways to good jobs.”

Those industries are manufacturing, government, construction, logistics and health care. Combined they provide more than 70 percent of the region’s good jobs for workers without bachelor’s degrees.

However, Brookings says that growth alone will not solve the problem—especially because several of those industries are not poised for long-term growth. The region, the report said, “must also improve the quality of its existing jobs.”

“The region’s leaders should work with employers who are already committed to improving job quality, and with those where the business case for job quality is clearest,” according to the report. “By leading the way, these motivated employers can put pressure on others.”

Johnson said in a statement that “working in partnership with the public sector, central Indiana’s businesses, universities, and philanthropic institutions can make intentional investments in strategies that will lessen risks associated with the future economy and increase the likelihood of continued and more broadly shared prosperity.”

The report found there are further disparities related to race and ethnicity in workers’ access to good or promising jobs.

For example, 30 percent of black men hold good or promising jobs, compared to 54 percent of white or Asian men.

Just 40 percent of black women hold a good or promising job, compared to 72 percent of men who are neither black nor Hispanic.

The report also warned state policymakers—who have doled out more than $900 million worth of economic development incentives to businesses in central Indiana since 2006—to be careful about spending state tax dollars on jobs that are not good or promising.

At least 39 percent of the new or retained jobs incentivized by the state from 2006 to 2017 were neither good nor promising jobs, the report said.

Subsidizing “other jobs”—those that aren't good or promising—with incentives means the state “may be subsidizing many of these jobs twice: first with an incentive and then again with spending on safety net programs," the report said.

But the IEDC defended its practices. IEDC spokeswoman Erin Sweitzer criticized Brookings for using numbers from such a wide time span—from 2006 through 2017—as well as the group's "attempts to average those [numbers] and evaluate them in today’s terms."

"Indiana’s economic climate—much like the country as a whole—looks dramatically different today than it did in 2006, in 2009 or even just five years ago due to a variety of factors, but most apparently the recession and the recent advancements in Indiana’s technology sector," Sweitzer said in an email.

Still, the IEDC said the annual average wage of jobs incentivized by the state has consistently been higher than the state’s average wage. Sweitzer said the average wage of committed jobs has increased steadily from $20.21 per hour in 2006 to to upwards of $26.75 per hour in 2017 and 2018. She noted that's "above the report’s referenced benchmark of $18/hour to qualify as a ‘good’ job."

The report found that the region has “lost many of its middle-class jobs in manufacturing and construction” and earnings growth here is slow and uneven, despite central Indiana having one of the fastest overall job growth rates in the Midwest.

Earnings growth here lagged the nation—primarily because industries did not increase their workers’ pay and benefits as much as their counterparts nationwide.

“We’ve created jobs here more quickly than many places in the country, and that is a good thing,” Johnson said. “Although we pride ourselves, as we should, on being a low-tax and low-cost-of-living state, that does not fully compensate for that [wage] gap or that difference. That is something we have thought might be true for awhile based on some of the competition we’re seeing."

For people in the middle-class, earnings actually declined during that decade. Workers from the 20th through 80th percentile of the income distribution saw declines in average annual earnings of up to 8.5 percent, while those at the very top and very bottom saw income growth.

“As low-paying work has proliferated and earnings growth has stagnated in central Indiana, more workers have found it harder to find jobs that pay a family-sustaining wage,” according to the report. “Many now struggle to make ends meet. Some workers who were once economically secure have fallen behind.”