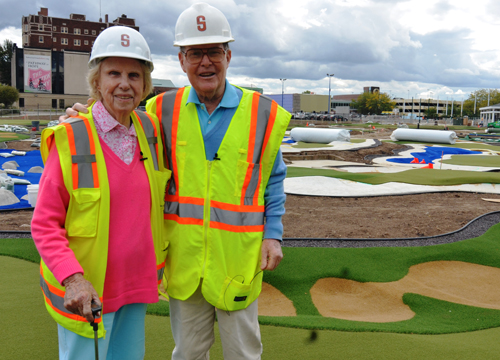 Alice Dye, who died Friday at 91, is being remembered as a dominant and pioneering figure in the sport of golf—both as a player and as a course designer.

The Indianapolis native and longtime Carmel resident wasn’t as well known as her famous husband of 68 years, Pete Dye, but her impact on the sport of golf was widely recognized.

"The PGA is deeply saddened by the passing of Alice Dye, one of the most enduring advocates for women’s golf,” the PGA of America tweeted Friday night.

Known as the “First Lady of Golf Architecture,” Alice Dye became the first female member of the American Society of Golf Course Architects, or ASGCA, in 1983 and the group’s first female president in 1997.

While Pete Dye is credited with designing more than 150 golf courses since the 1950s, including some of the most famous courses in the world, Alice played a major role in all of them.

The couple designed numerous courses in Indiana, including seven on the Pete Dye Golf Trail.

Alice was credited with being the driving force behind the couple’s business operations and for being the problem solver when issues came up during the construction phase of projects.

She was the one who came up with a late-hour idea to put an island green on the 17th hole at the TPC at Sawgrass after a design dilemma emerged. It became one of golf's most recognizable and difficult holes.

She also developed and encouraged the “Two Tee System for Women,” encouraging clubs to introduce an additional set of forward tees for female golfers.

The ASGCA called her “the matriarch of the most famous family in golf design.”

“Alice was certainly a pioneer and inspiration to us all regardless of gender,” ASCCA President Jeff Blume said on the association’s website “but she blazed a trail as only she could for great architects like Jan Bel Jan, Vicki Martz and Cynthia Dye McGarey to follow.”

Dye received the 2017 Donald Ross Award, given to a person who has made a significant contribution to the game of golf and the profession of golf course architecture.

She is survived by Pete, 93, as well as their two adult sons, Perry and Paul Burke.

“Alice blessed our sport as a player, a designer, and a trailblazer,” PGA Tour Commissioner Jay Monahan said on the tour’s website. “But if you met her, you realized her favorite role of all was being a loving wife and mother. She loved golf and our sport loved her back.”