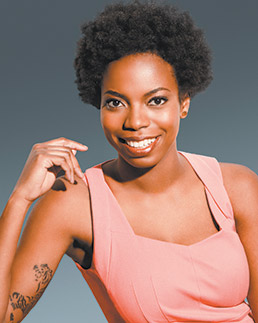 While Sasheer Zamata's brand of comedy does land plenty of laughs, the politically progressive comic at times finds herself building toward a sobering point. "Somebody told me that listening to me feels like you're getting a kiss on the cheek followed by a left hook," says Zamata, an Indianapolis native who graduated from Pike High School. "I like that."

It's a comedic voice that was heard across the internet last month when, in a viral clip, Zamata, 32, offered searing commentary on a Louis C.K. bit about the Parkland tragedy.

"It's like if you go to your favorite restaurant, and instead of getting the chicken that you ordered, they serve you pigeon," she said of C.K.'s new material. "It may taste the same at first, but the more you chew on it, the more you realize the quality has decreased."

The former "Saturday Night Live" cast member is currently planning the follow-up to her debut 2017 stand-up special, "Pizza Mind," and honing her act on the road.

Q: How would you describe your approach to stand-up?

Hilarious—period. But I would say it's a little bit storytelling-esque. I derive all my material from personal experiences, so there's a lot of stuff about relationships or family or just things I am going through at the time, all from my perspective.

Q: Who were your early comic influences?

I was a really big Lucille Ball fan—still am. And Carol Burnett, Fran Drescher. I like a lot of women who are silly and classy at the same time. Sometimes women aren't really seen as both, so I love it when that combination is visible.

Q: How important is it for you to use your platform to comment on meaningful subjects, such as race and gender?

I wouldn't want to make a blanket statement saying that's the responsibility of all comedians, or that's the responsibility of all audiences to choose to look into things like that. Thankfully, there's a variety of (comedians), so you can just choose what you want. If someone is like, "I just want to zone out and laugh and not even think about what's happening in the world," I get it. Go for it. When people are like, "I want to hear people talk about issues that relate to me and what I'm going through," I also get that.

Q: You were named a celebrity ambassador for the American Civil Liberties Union in 2015. What have you gained from that experience?

My job is just to be a mouthpiece for whatever they need, whatever issues need to be highlighted. And I'll ask them questions, too. The new material I'm working on has a lot to do with reproductive health and women's rights, and sometimes I don't know everything. I'll ask questions and be like, "Is this right? Is this factually correct? Is this even in the direction we should be going?" It's nice to be able to communicate with people who are on the front lines, working with communities and trying to really fight injustices.