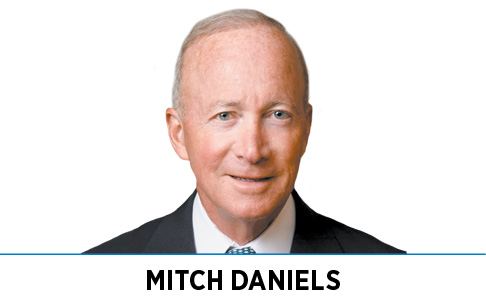 So here we are in another presidential campaign season (when aren’t we?), and the air is thick with greenhouse gas of the political variety. When candidates take a break from talking about themselves, they generally turn to “bold” policy pronouncements that they hope will prove eye-catching enough to separate them from the thundering herd of wannabe Washingtons and Roosevelts.

Thanks to the modern primary-dominated process—designed with the goal of returning nominations to “the people” but, instead, captive to the parties’ political fringes—these policy ideas tend to fall into two unfortunate classes. The first consists of those crafted to massage the erogenous zones of extremists. The second is those policies chosen for their divisiveness quotient, the extent to which they underscore the stark difference between Us and Them, and the proponent’s passionate commitment to Us.

Almost all share the common denominator of absurd impracticality. They have given us a new definition of the admirable adjective “aspirational,” now taken to mean “I know it’s preposterous, so don’t hold me to it.”

But now, thanks to some wildly imaginative researchers at a group of universities—including Texas A&M, Arizona State, Cal Tech and Purdue University, where I work—candidates have available for inspection a genuine Big Idea that just might transcend these dreary categories. As reported in Scientific American and elsewhere, this consortium of more than two dozen scientists and engineers proposes an “energy-water corridor” along the nearly 2,000 miles of the U.S.-Mexico border. It is that rarest of modern phenomena: an ecumenical concept with unifying potential, an idea that even sworn enemies can love.

The scientists envision a chain of green-energy installations, powering seawater desalination that could make the desert bloom Israel-style, ease water-shortage concerns in several southwestern states and trigger enormous economic possibilities in both the United States and Mexico. And, oh yes, provide through its necessary, concomitant protective features a major new physical barrier to illegal immigration.

Any idea this big faces daunting feasibility questions, but the proponents have spent a fair amount of time thinking through and costing out their plan. They seem on unchallengeable ground that the border regions of California, Arizona, New Mexico and Texas are as conducive to solar and wind power as virtually any place on Earth. Nearby, potentially enormous natural-gas deposits could complement the renewable energy and provide power day and night. The attractiveness and opportunities for private capital could be immense.

A solar park with a width of just five one-meter panels—about 16 feet—running like a ribbon along the corridor’s entire length would produce some 16 gigawatt hours of electricity per day, on the same order of magnitude as all the hydropower along the U.S.-Canada border, or at a full-scale nuclear power plant. The estimated cost is $4.5 billion installed, with the investment recouped in less than 10 years.

The 8 million panels needed, according to the scientists’ report, would be within the present capacity of the U.S. solar industry, and would provide a strong economic jolt for those American businesses in their competition with Chinese and other manufacturers. A major shortcoming of solar energy is its inconsistent energy production; a corridor reaching from the West Coast to the Gulf Coast would address that problem by enabling load-shifting from west to east and east to west depending on time of day.

Alongside the solar farm, the consortium imagines a network of wind turbines, taking advantage of some of Earth’s windiest geography. The turbines’ annual 1.2 gigawatts of energy, powering two reverse-osmosis desalination facilities, could provide more than 2 million acre-feet of water per year, covering, for example, the annual commercial and agricultural consumption of Texas.

The proposal doesn’t stop there. There are suggestions of a “super-pipe” system to move the water to where it’s most needed within a free-trade zone, 100 kilometers wide (about 62 miles), on both sides of the border. As the authors somewhat slyly put it, the fencing or barriers attendant to all this solar and wind infrastructure would constitute a “border security” system with “instant feedback and surveillance capability throughout the entire region.”

Sure, there are implementation issues galore. We haven’t been shown cost projections or rates of return for several big features of the plan. Unless the United States adopts some of the breakthrough regulatory reforms championed by thinkers such as lawyer and author Philip Howard, the country’s insanely cumbersome anti-development laws would likely strangle this greenest of initiatives in its infancy. In fact, the smartest modification for the plan might be to build the whole thing on the Mexican side of the border.

But based on the work to date, the energy-water corridor looks vastly more practical than some presidential candidates’ proposals for trillion-dollar-plus loan forgiveness and “free” (the quotation marks should be journalistically mandatory) everything.

Perhaps the United States and Mexico, two nations that have been squabbling, will find a reason to work on it together. The two nations into which America itself has split might even do the same.•

Daniels, a Washington Post contributing columnist, is president of Purdue University and a former governor of Indiana. His column will appear monthly in IBJ.