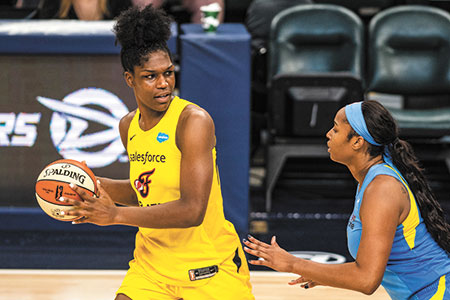 As the Indiana Fever start their 20th season, the team’s front office isn’t shying away from the obvious.

“We’re definitely in a rebuild mode,” team CEO Allison Barber told IBJ. “We have some work to do.”

The sentiment isn’t hard to understand. The Fever are coming off a couple of dismal seasons, with just nine wins in 2017 and a franchise-worst six last year.

New leadership will be at the helm to try to pull off the turnaround.

In March, Barber, the former chancellor of WGU Indiana, came aboard, replacing Kelly Krauskopf, who joined the Indiana Pacers as assistant general manager. Krauskopf had led the franchise since its founding.

Also joining the executive ranks was Tamika Catchings, who’s serving as vice president of basketball operations. Catchings played 15 years with the Fever before retiring after the 2016 season. She is a four-time Olympic gold medalist and led the Fever to their only league title, in 2012.

The team returns several key players, including Shenise Johnson, who missed all of last season with a torn ACL suffered in 2017. At the time of her injury, the Fever were a .500 team, but have won only eight games since.

The team also hopes to capitalize on its first-round draft pick, center Teaira McCowan of Mississippi State University, who will help the guard-heavy team on the inside.

Off the court, the Fever are plotting longer-term strategies to boost revenue and bring in new fans and sponsors.

“That’s going to take us some time, and to do it, we’ve got to put some exciting basketball out on that court—we’re going to do that,” Barber said. “I think the energy is moving in the right direction.”

The team, part of Pacers Sports & Entertainment, fought for more than a decade to stem the red ink before posting its first deficit-free year in 2013.

Team officials have said the franchise has made money in most years since, but have declined to share details.

Fuson credited Krauskopf with building the franchise into a stalwart, noting the Fever “really became a model in terms of how she built … and ran it over the years.”

Krauskopf—who played college basketball, served as an assistant commissioner of the Southwest Conference, and was the WNBA’s first director of operations—was partially responsible for drafting Catchings and several other stars who helped the team reach the WNBA Finals in 2009 and 2015 and win the championship in 2012.

Some players from that era, including Briann January and Katie Douglas, were included on the 20th anniversary team announced by the Fever earlier this year.

“Without question, the Fever have been—and continue to be—a model franchise in the WNBA,” said Christy Hedgpeth, chief operating officer for the league.

“It really speaks to the strength of ownership and management that have been at the helm for 20 years … the sustained organizational commitment to the Fever over that [time] is something that’s so important for our league.”

Stephanie Mavunga, a second-year Fever player from Brownsburg, said growing up watching the team played an integral role in her drive to become a professional.

“Seeing it for yourself and growing up around the signs, the banners and hearing the names of players definitely made a lasting impact,” she said.

“It’s been nice to see where it started and where it’s gone throughout these 20 seasons … the league has changed vastly, given where the teams are now.”

She said that, although the WNBA still falls far short of the NBA in terms of factors like casual sports fans’ perceptions and attracting sponsors, “things are getting better.” 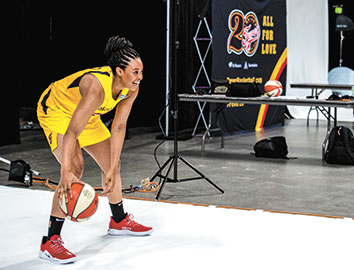 Catchings, who joined the Fever in 2001 from the University of Tennessee, said she didn’t think a lot about the business side as a young player. She concentrated on the excitement surrounding the team and making sure she was engaging with the community in a positive way.

“I wanted to be the best I could here … so that was really my focus,” she said.

She sensed in 2009 that the franchise had hit a turning point when it reached the finals for the first time. That’s when she began encountering fans who shared her passion for the team, including some not from Indianapolis.

“I think that, and winning the championship a few years later, really helped feed the advancement of our franchise,” she said, “not just here in Indianapolis but in our state and beyond.”

The Fever have outlasted nine other teams that were founded before or during the team’s inaugural season, including franchises in Cleveland and Detroit.

It’s one of 12 teams still in the 23-year-old league and is tied with the Seattle Storm for fifth-oldest.

The team is the most heavily featured in the WNBA’s deal with CBS Sports Network announced in April. The network will carry 40 regular-season games, 12 of which include the Fever. 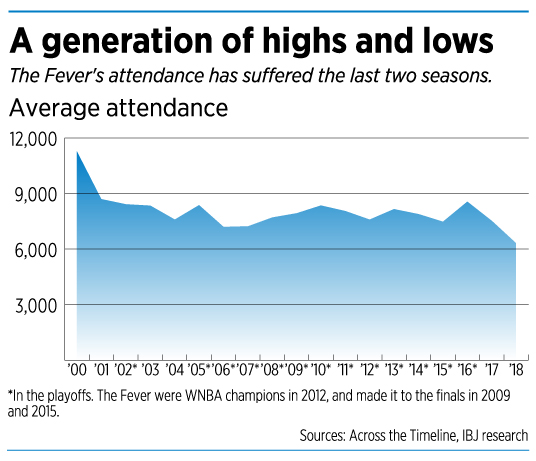 Terms of the multiyear deal have not been disclosed, but Hedgpeth said it likely will drive growth for the league and its teams.

“We believe we have an incredible product and … partners like CBS allow us to get more exposure and reach more fans,” she said.

The league also has deals with ESPN, NBA TV and Twitter, and some Fever games will be broadcast on Fox Sports Indiana.

The WNBA’s deal with ESPN—which includes 16 regular-season games on ESPN2—retains the network as the home for post-season games.

As the season begins May 24, Fever management is focused on building attendance and sponsorships.

The Fever’s best attendance was its first season, when it averaged 11,267 fans per game. Since then, attendance hovered around 8,000 until slipping the last two years as the franchise has been plagued by injuries and other setbacks. Barber and Catchings said they expect a rebound this season.

“I think a lot of people are excited about the new direction of the franchise, and where the team could be going,” Catchings said.

Larry DeGaris, a sports business expert at the University of Indianapolis, said attracting solid crowds is one of the Fever’s strong suits.

“The team has done a really good job of establishing itself over the years and making its games something people enjoy going to,” DeGaris said.

Barber said the team hopes to capitalize on its recently announced partnership with Salesforce—which included an agreement to put the tech giant’s logo at the top of Fever uniforms—to continue building business relationships. She said she’s seeing a philosophical shift.

“When you can find partners whose priorities align with those of the Fever, that’s where you have a robust relationship that will inspire others to do the same,” she said. “We’re expecting great things.”

The deal with Salesforce, DeGaris said, “helps create an air of legitimacy.”

Barber said the team has signed a handful of new sponsors in recent weeks, though she declined to provide details.

“I think with rebuilding, retooling our team, we’ll see economic growth, and we’re on track to have a very successful year,” she said. “We’re on the upswing for sure with our business model.”

Catchings is eager for progress on the court, as well.

“We certainly want to be consistently bringing in money and being on that side of the line, but I want us to be a dominant team,” she said.

“I want us to be the team that, when people talk about [us], it’s like, ‘They’ve been at the top for a long time,’ and everybody is trying to figure out ways to knock us down.”•