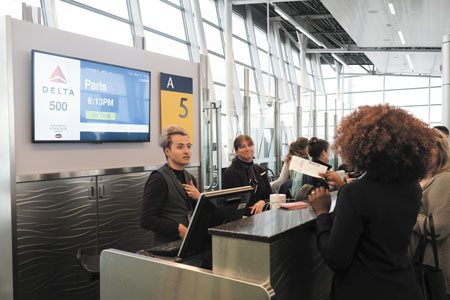 “The flight has exceeded our expectations,” said Maggie Bishop, the airport’s business development analyst for air service development. “We are pleased with the performance in the first year.”

Atlanta-based Delta began flying between Indianapolis International Airport and Paris’ Charles de Gaulle Airport on May 24, 2018, giving Indiana its first-ever nonstop trans-Atlantic flight. Between then and the end of November—the most recent date for which U.S. Department of Transportation data is available—Delta carried nearly 23,400 Paris-bound passengers on the flight.

“These are not bad figures for a ramp-up period,” said Madhu Unnikrishnan, editor of the aviation industry publication Skift Airline Weekly.

And, Bishop said, Delta has indicated that it plans to increase the frequency of the Paris route this September. Frequency fluctuates depending on time of year, but last year Delta offered the route five days a week in September. This year, Bishop said, that will increase to six days.

That is “definitely encouraging” for Indianapolis, Unnikrishnan said. “Any time an airline adds more service, it means they think the route’s going well.”

Another sign of the route’s strong showing: It took less than a year for Delta to earn the full $3.5 million in first-year economic incentives allowed under its contract with the Indiana Economic Development Corp.

Delta hit its incentives cap by the end of the first quarter of this year, said IEDC spokeswoman Abby Gras.

She said in an email that state officials are “really encouraged by the performance of this route—it’s clear that there is a need and a want for increased connectivity between Indiana and global markets like Europe.”

“The route has performed as well as other established markets with similar service, which is a promising sign, and we look forward to continuing the momentum heading into year two,” Gras said.

The early success of the Paris route is especially encouraging, Bishop said, because of its high-profile nature.

Indianapolis is one of 11 U.S. cities from which Delta offers nonstop service to Paris. And since the route launched here, it has drawn plenty of attention from other airlines.

“Every airline we have talked to since we’ve launched Paris is interested in the success of that flight,” Bishop said. “It has certainly elevated the conversation and piqued the interest.”

Airport officials always thought Indianapolis had enough passengers to support such service, Bishop said, and now it has the numbers to back that up.

“After the first year of operations, we feel confident to say that Indianapolis can handle a long-haul trans-Atlantic flight,” she said.

Route data also shows some passengers are using the Paris flight as a jumping-off point for other destinations, Bishop said. “This is not just a nice flight to Paris. This is access to the rest of the world.” 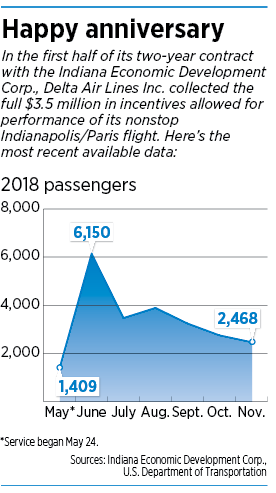 For Indianapolis passengers who use the Paris flight as a connector, the Indian cities of Delhi, Mumbai and Bangalore and the Italian cities of Florence and Rome are top destinations, Bishop said.

The data provides ammunition the airport and its business development partners, including the IEDC and the Indy Chamber, can use to land more international flights, Bishop said.

The tech and pharmaceutical industries are big in India, as they are in Indianapolis. And providing easier access to India is significant in and of itself, Skift Airline Weekly’s Unnikrishnan said.

“Getting from North America to India has always been difficult,” he said, because there aren’t a lot of direct flights. Many options involve two layovers.

Delta declined to answer questions about the route’s performance or how it compares with international routes the airline has launched in other midsize markets.

But an airline representative said in an email that many customers have told Delta the route “is meaningful to them.”

“We look forward to flying more customers to more places—and also welcoming back many of the same customers—in our second year of Indianapolis-Paris service,” spokesman Morgan Durrant said.

International flights from midsize U.S. markets don’t always succeed, Unnikrishnan said. In Cleveland, for instance, Icelandair launched last May what was intended to be year-round service between that city and Iceland’s capital of Reykjavik. But that fall, Icelandair said it was converting the route into a seasonal service. In March, the airline canceled it.

Indianapolis is in a different position, Unnikrishnan said.

Its economy is stronger than many of its peers, and the presence of several multinational companies here helps strengthen demand for international flights. Also, Indianapolis was a mini hub for Northwest Airlines, which has since been acquired by Delta. This gives Indianapolis a core of loyal Delta customers, he said.

“I think Indianapolis has a lot of things going for it that a lot of other midsize cities don’t have.”•