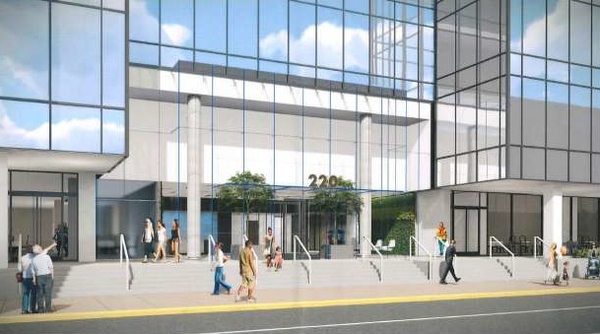 An updated front entrance is planned for a prominent office building just north of Monument Circle, as the local developer that owns the property continues extensive renovations.

Locally based Keystone Corp. plans to create a two-story entry way for the former AT&T 220 Building at 220 N. Meridian St. that it bought in November 2017 for $20.5 million.

Keystone on May 8 received approval from the city’s Metropolitan Development Commission to add a “clear-view glass entrance” to the 23-story building’s façade along Meridian Street, according to filings with the city. It was previously approved by the Regional Center Hearing Examiner on April 11.

The change is among several the company has planned for the building it is renaming Monument Circle Center. Those changes include the addition of an interior parking structure, dozens of apartments, retail space, restaurants and upgraded office space.

Mark Tomyn, vice president of development for Keystone, said the reflective black glass that covers the building now “isn’t very inviting” to the public or the people who work in the building.

“It looks like (it could be) Darth Vader’s lair,” he said.

The new design, which is still being finalized, will make the building seem more open at street level, while also adding a floating effect to the lower levels, Tomyn said. Most of the rest of the building will retain the black façade, he said.

The entryway enhancement, designed by CSO Architects, is part of Keystone’s ongoing effort to convert the building from strictly office space into a mixed-use development geared more toward the post-rush hour and weekend crowds, said vice president Jasmin Shaheed-Young.

Keystone will carve out 11,000 square feet of retail and 6,100 square feet for restaurants on the first floor along Ohio and Meridian Streets.

“This will hopefully bring some weekend traffic, some evening traffic to … the area,” Shaheed-Young said. “We just want more individuals coming down and considering that little piece of Meridian Street to have dinner and spend time.”

“As you're coming north from the Circle, this will be the first restaurant clump that you will run into along Meridian Street,” Shaheed-Young said. “We’re really trying to bring assets to the community where we can elevate Indianapolis.”

Work has already started on a three-level, 317-space parking garage on the second through fourth floors. The facade work will commence as soon as the design is finalized.

About 160 studio and one- and two-bedroom apartments are planned for the top 10 floors of the building. A conference center, rooftop pool and fitness center are also in the works.

The remainder of the building, or about 130,000 square feet, will remain office space. Shaheed-Young said all parts of the building will receive some renovations. The entirety of the project is expected to cost more than $80 million, she said.

The renovation will be done in phases, with the parking garage being completed first, followed by the entryway change and other exterior work. Shaheed-Young said the entire project is expected to last 18 to 24 months.

The building, constructed in 1974, was originally home to the telephone company Indiana Bell, which eventually folded into AT&T. AT&T still leases space on one of the building's top floors and might remain in the building, Shaheed-Young said.

Keystone in September 2018 received approval from the city for $16.7 million in developer-backed bonds for the Monument Circle Center project and the conversion of the Illinois Building at Illinois and Market streets into an Intercontinental Hotel.