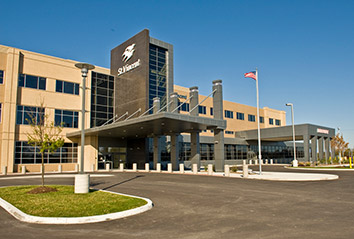 Fishers development officials hope to create a huge cluster of medical and research facilities
near Interstate 69’s Exit 10, but local real estate experts disagree about the amount of potential demand for
such a development.

Town officials plan to unveil the proposed Fishers Medical Technology Corridor at Wednesday’s
regular council meeting. The business park would encompass about 900 acres on the town’s northeast
side and require rezoning of much of the land from residential and agriculture to commercial.

Planners envision five distinctive districts within a new urbanism-styled park
that would include more than 3.7 million square feet of office and retail space, as well as research and educational
facilities.

Robinson said major hospital players are already established
in the area and aren’t likely to expand soon. He pointed out that Clarian Health has delayed plans for
its nearby $180 million Saxony Medical Center.

“I
just can’t imagine there is a market for what [Fishers is] proposing would be there in five years, at the earliest,”
he said.

Fishers officials say the business park could take a decade to develop
and tenants would be lured by existing medical facilities..

Clarian’s 42-bed
hospital was slated to open in 2010 but has been delayed indefinitely because of cost considerations.

St. Vincent Health has built several outpatient facilities in the area—south of I-69 and
east of State Road 238—including a free-standing emergency care facility, an ambulatory surgery
center and medical office buildings.

“We are sitting on 26 acres,
so we definitely have room to expand, because right now there are no inpatient services,” said St. Vincent spokesman
Johnny Smith, noting the hospital system supports the Fishers development.

And
Community Health has a outpatient medical facility on Olio Road, also in the nearby Saxony development.

“With the investment that Community, St. Vincent and Clarian are making
in that area, we believe that this is a natural for an expansion for medical and technology types of businesses,”
Fishers Development Director Wes Bucher said.

Bucher estimated it could take
six months to rezone the property, much of which is farmland. Some landowners already have expressed
interest in selling, Bucher said. Others could partner with developers or develop the land themselves.

Ross Reller, a senior adviser at Resource Commercial Real Estate, supports Fishers’ vision
for the interchange and likened it to what Carmel accomplished when attracting office development along U.S. 31.

“I agree with their decision 100 percent,” Reller said. “The
classic example is what Carmel has done along the Meridian Street corridor, in recognizing that that’s
their cash cow, so to speak.”

If the project is developed as proposed,
Fishers town planners say 36,281 jobs could be created in the area—an increase of 28,589 jobs over current zoning. In
addition, assessed value of the land would increase by about $600 million under the proposal and could allow the town to collect
$36.3 million more in road-impact fees.

“The assessed valuation helps build
the tax base for the community and doesn’t put as much pressure on the residents to support the
infrastructure needs,” Bucher said.

Town officials
have yet to gather public or landowner input on the proposal, but plan to over the next four months.