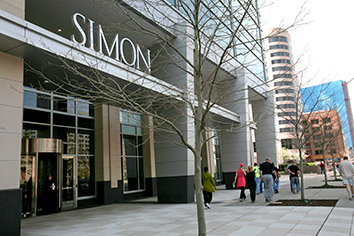 Simon Property Group Inc. CEO David Simon has landed on best-CEO lists for years—thanks to the company’s impressive growth and strong stock performance. Since its 1993 initial public offering, SPG has racked up annualized total return of 14.0% a year, far better than the 9.6% posted by the S&P 500.

Today, SPG continues its enviable run of strong operating performance. But the same can’t be said for the stock. The company’s shares—like those of many of its rivals in the retail real estate game—are out of favor, as investors wring their hands over retail bankruptcies and the long-term impact of the e-commerce explosion.

The result is that, over the last five years, Simon shares have essentially been flat—a span when the overall market, as measured by the S&P 500, zoomed more than 50% higher.

With the stock languishing, and the company continuing to increase its quarterly dividend, Simon shares now sport a 5% dividend yield—a rich payout that, for true believers, merely reinforces the allure of the stock.

But shares of SPG, founded by the Simon brothers in 1960, are undeniably at a crossroads, with some investors believing that—even though the company focuses on high-end properties where demand for space is strongest—it won’t be able to escape being dragged down by widespread retail weakness, especially among apparel chains.

“When you start to go down the list of SPG’s top tenants, the question becomes how strong are these businesses and are they likely to open new locations or even renew lease contracts as they expire,” BOOX Research wrote this month in an analysis on the investing website Seeking Alpha.

“Maintaining high occupancy with increasing rents is at the core of SPG’s business model and that outlook has become increasingly unclear.”

To be sure, even bearish investors acknowledge that SPG’s business model breeds stability. Tenants are locked into long-term leases, and as long as they are able to scrape together rent payments and avoid bankruptcy, a reliable income stream flows to Simon. Once the leases expire, Simon typically can renew them, or find another tenant, at a higher rate.

So far, the metrics produced by Simon’s nearly 200 U.S. malls and outlet centers have been reassuring. In the 12 months ending March 31, sales per square feet rose 3.1% from a year earlier. Occupancy was 95.1%, compared with 94.6% the prior March.

Perhaps most notably, the company’s leasing spread—the difference between rent on a new lease and the previous one—was 27.3%.

“We are taking out some less-performing retailers, putting in better ones,” David Simon said April 30 on the company’s first-quarter conference call.

“Our mix continues to change. We have felt confident we still have leases that are under market, and we expect to continue to post a positive leasing spread.” 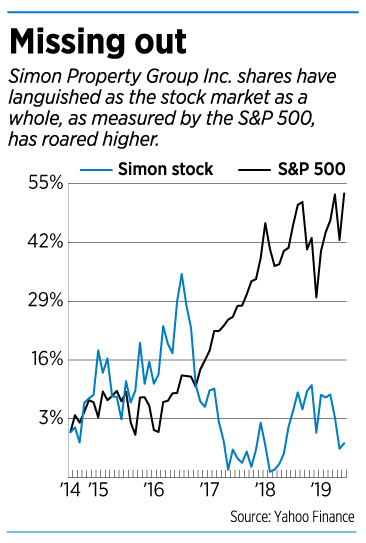 Analysts and bullish investors say Simon has the clout to ratchet up rents because of its focus on premium properties that retailers most want to be in, such as Indianapolis’ Fashion Mall at Keystone. In what proved to be a prescient move, Simon in May 2014 spun off its Class B malls, saying it wanted to focus on its glitziest, biggest properties.

“While I concede that many of the lower quality mall and retail properties are likely to go belly-up in the next decade, I believe that higher quality retail real estate, like that owned by SPG, will continue to thrive,” investor Julian Linn wrote in a May 30 Seeking Alpha analysis.

But BOOX Research contends a turning point might be looming. It notes that 20% of Simon’s U.S. leases are set to expire by the end of 2021.

The report said the expirations are coming at a time many retail companies—including the parents of The Gap, Banana Republic, Victoria’s Secret and Ann Taylor—are reporting struggles, including drops in same-store sales.

“My base case scenario assumes many of these tenants retrench by looking to close the under-performing stores as the leases expire,” BOOX wrote.

“This is a tried and tested method where ‘strong balance sheet/weak growth’ companies reshuffle operations to maintain profitability. … I believe the next three years will be the company’s biggest challenge.”

For their part, Simon’s top executives sound as upbeat as ever—though in their messaging to investors they’re subtly redefining the business.

While in press releases the company used to describe itself as a “global leader in retail real estate,” it now calls itself “a global leader in premier shopping, dining, entertainment and mixed-use destinations.”

It’s a nod to the reality that, going forward, maximizing the value of its real estate often will mean building non-retail projects, from apartments to office space.

In recent months, for instance, it launched construction of a 430-unit apartment development at a Texas outlet mall and an AC Hotels by Marriott at a shopping mall in Miami.

“Our extensive identified pipeline of more than $5 billion in new development and redevelopment opportunities across all of our platforms will fuel our future … growth and reinforce our well-located properties,” David Simon said on the April 30 conference call.•