Home » BEHIND THE NEWS: A flawed culture poisoned Celadon 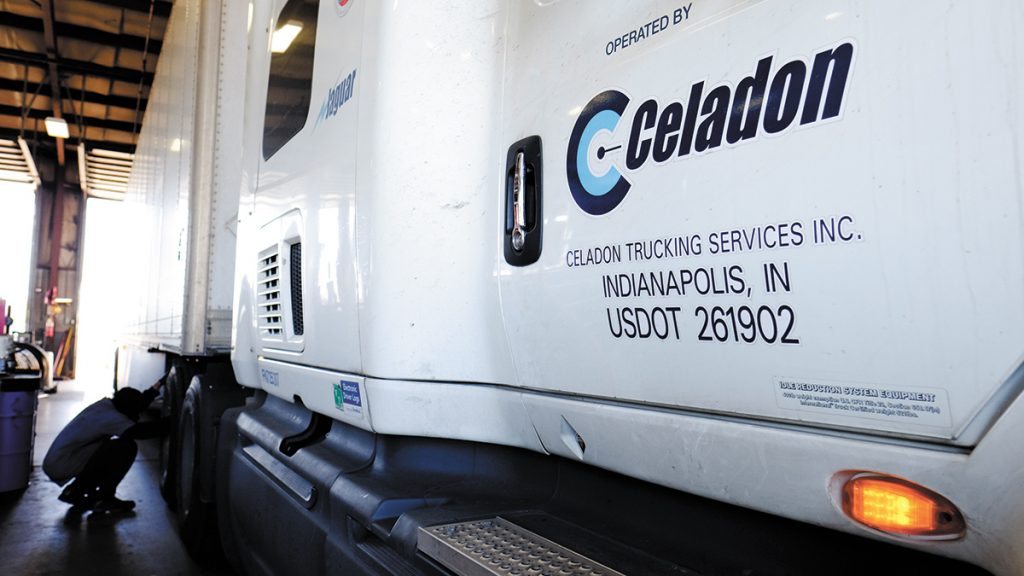 Here’s something you can be sure Franklin College won’t be highlighting in its student-recruitment marketing: All three of the former Celadon Group Inc. executives charged this year in what prosecutors call a sweeping accounting fraud graduated from the tiny liberal arts school from 2002 to 2006.

That might sound like trivia, but critics of Celadon management say it points to deep-seated problems with the company’s clubby culture that helped propel the Indianapolis-based trucking giant toward financial ruin.

Celadon’s years of struggle culminated on Dec. 9 with the company’s announcement that it had filed for bankruptcy and was shutting down, eliminating nearly 4,000 jobs.

The business—which was founded by entrepreneur Stephen Russell in 1985 and grew into one of the nation’s largest trucking companies—didn’t have to suffer this ignominious fate, CEO Paul Svindland said in an email.

Svindland, a turnaround expert hired in 2017 to right Celadon, soon found himself grappling with fallout from Securities and Exchange Commission and Justice Department probes into accounting practices by prior management.

“The sole reason we weren’t able to close on a $200M refinance package back in June of 2018 was because we received a subpoena from the DOJ,” Svindland said in his email. “So yes I am 100% sure we would have made it. Deal was on the one yard line before we received the DOJ subpoena!”

The Justice Department has accused three executives of using accounting chicanery in 2016 and 2017 to mask tens of millions of losses suffered by Quality Cos., a Celadon subsidiary that owned trucks and leased them to drivers.

As early as the spring of 2017, the investment firm Prescience Point Research Group was publicly accusing the company of accounting fraud—and suggesting a dysfunctional corporate culture might have allowed it to fester.

“We find it bizarre that CGI filled so many management positions with people from the same college,” Prescience wrote in a 2017 report that identified five managers from Franklin College, which has only about 1,000 students. The alumni all were in their 30s, and some were former fraternity brothers at Sigma Alpha Epsilon.

Prescience added: “Incestuous hiring practices and nepotism may have created an environment lacking in accountability and ripe for fraud.”

Prescience—which specializes in short-selling, an investing strategy that derives profits from a stock falling in price instead of increasing—wasn’t alone in raising alarms about Celadon.

He told IBJ this week that former and current employees he spoke with described a “culture that was very incestuous. There were a lot of people hiring their friends.”

Tim Fort, a professor in the Kelley School of Business at Indiana University who researches ethical corporate cultures, said he wasn’t familiar with Celadon’s inner workings.

However, he said the existence of clubby management teams can raise the risk that the teams will stop being accountable to outside constituencies and talk themselves into thinking inappropriate conduct is justified.

“Human beings are known for having a lot of biases,” he said. “We can rationalize all kinds of behavior we think justifies what we are doing.”

The accounting fraud allegations lodged by investigators focus on Celadon’s aggressive expansion of Quality Cos., Celadon’s truck-leasing division, from 750 tractors in 2013 to 11,000 in 2016.

That year, Quality began to struggle because of a slowdown in the trucking market. Another problem was that it owned a significant quantity of a model of truck known to have major mechanical problems, making it unappealing to lease.

By 2016, many of Quality’s trucks were idle, unleased and overvalued on company books by tens of millions of dollars, according to prosecutors.

They charge that, instead of owning up to that calamity, Quality engaged in four truck-swap transactions with an Indianapolis truck dealer that masked the losses. 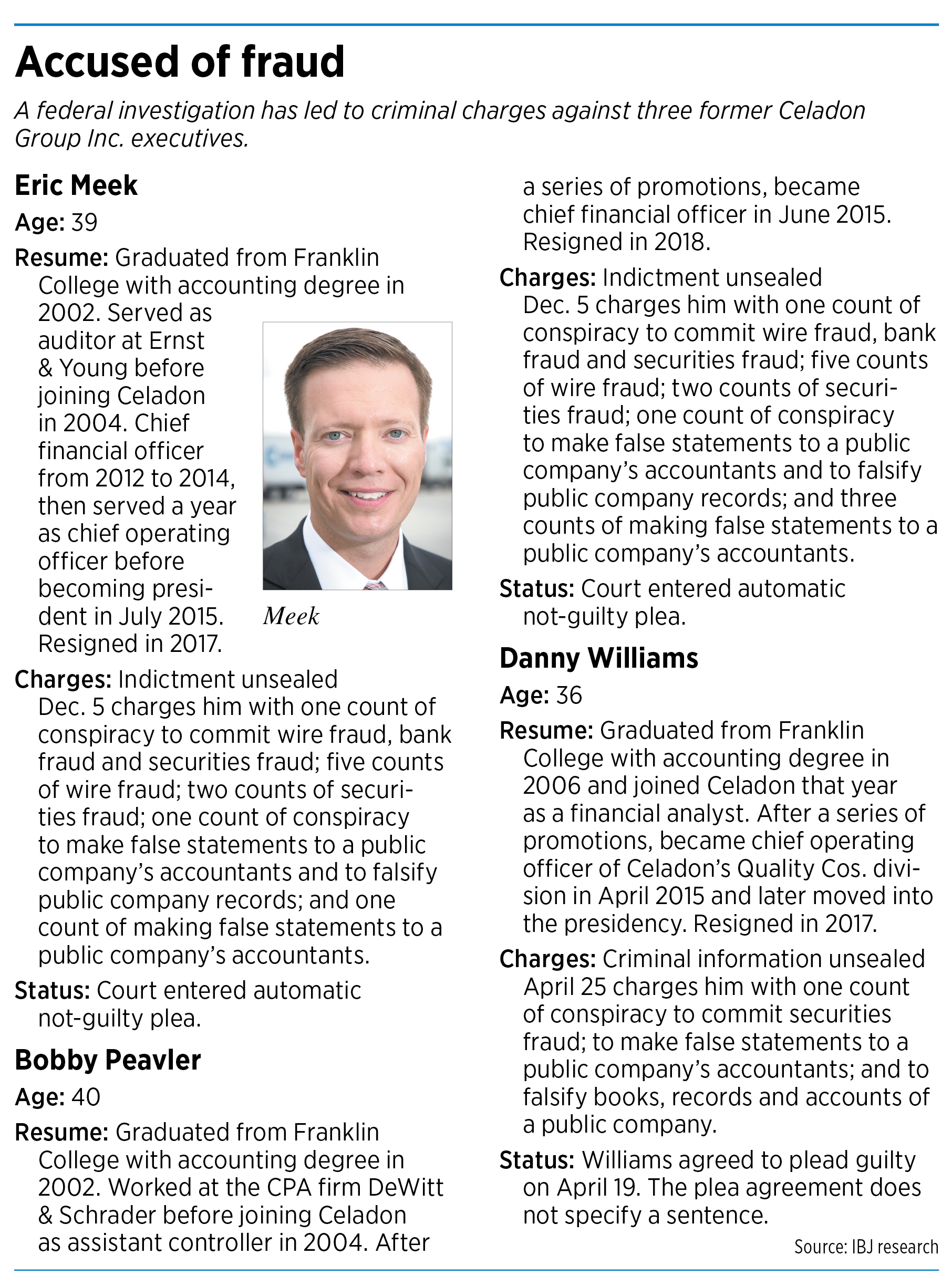 The dealer is not identified in court records, beyond stating that it is headquartered in Iowa. However, the description matches up with Stoops Freightliner, part of Iowa-based Truck Country.

The invoices the parties created overstated the trade in value for the 1,000 trucks Celadon disposed of—wiping out the need for Celadon to record a loss. The dealer then tacked on the amount of that overstatement to the price of the 600 newer used trucks Celadon bought, according to prosecutors.

Celadon’s outside auditor, BKD LLP, stepped up its scrutiny of the transaction after a December 2016 post by Yoon on Seeking Alpha questioned the propriety of the trades. Yoon asserted that he’d been tipped off to the transactions, which he said were with Stoops, and that he’d filed a whistleblower complaint with the SEC.

In an attempt to put those questions to rest, Peavler signed a letter in February 2017 to BKD stating that the “sales and purchases transactions were conducted at arm’s length and the prices at which the company bought and sold vehicles reflect fair market values at the time of the transactions. Each transaction was [discrete] in nature, and none were interdependent. There were no undisclosed side agreements related to these transactions.”

In connection with that inquiry, BKD held a series of meetings with Celadon brass, including one on April 5, 2017, attended by Meek, Peavler and other Celadon executives.

At that meeting, the executives falsely represented that the transactions were legitimate, according to prosecutors.

Even so, BKD lost faith. On April 25, it notified Celadon that investors no longer should rely on the company’s financial statements for the fiscal year that ended in June 2016 or the following two quarters.

Celadon never has released new financials. In fact, in April 2018, the company said its problems were much older and deeper than expected and that it had likely overstated earnings by as much as $250 million during a three-year period that ended in 2016.

According to the indictment of Meek and Peavler, Celadon in September 2016 was at risk of violating a covenant on its bank loan that limited its ratio of debt to earnings. To avoid having that happen, Meek and Peavler persuaded Stoops to pay it $25 million just before the quarter ended and kept secret that Celadon would have to repay Stoops once the next quarter began.

At another point, Peavler persuaded Williams to delete certain emails to prevent BKD from learning the true nature of the Stoops transactions, according to the indictment.

Attorneys for Williams, Meek and Peavler did not return calls or declined to comment.

Throughout the period Quality Cos. was unraveling, Celadon also struggled on other fronts—all of which pushed the stock down from $27.22 in March 2015 to $3.95 in April 2017.

On May 2 of that year, the company announced a management shakeup, with Meek stepping down as president.

In a conference call with investors the next day, CEO Paul Will defended the company’s rapid diversification into logistics and other fields, saying most of the acquired companies had performed “reasonably well.” Yet, he said it was time to refocus on the core trucking business.

“Celadon Trucking had always been a solid operating company measured by the ABCs of trucking—superior customer service, strong safety performance, good utilization of our equipment and low cost per mile. This began to deteriorate,” he said on the call. “During the March quarter, we determined that change had to happen.”

In a filing in bankruptcy court on Dec. 8, Celadon Treasurer Kathryn Wouters said the company had been experiencing negative cash flow for several years.

Celadon added to its financial strain in April of this year by entering into a deferred prosecution agreement with the Justice Department under which it agreed to pay restitution of $42.2 million. That same month, the SEC filed a civil accounting fraud suit against the company.

It’s not clear whether additional criminal charges are in the offing. Jennifer Ross, the acting public affairs officer in the U.S. Attorney’s Office, said only: “The investigation is still ongoing and we will continue to follow the evidence.”

So far spared has been Will, 53, who served as CEO of Celadon from 2012—when Russell retired—until Svindland replaced him in July 2017.

In the indictment of Meek and Peavler, Will is described only as “Executive 1.” He’s referenced just four times in the 29-page document and is not accused of illegal behavior.

Also unclear is whether Truck Country or any of its employees are in prosecutors’ sights.

Greg McCoy, CEO of the Truck Country dealerships, could not be reached. But in a statement last April, he said: “Stoops has cooperated fully in the government’s investigation, and will continue to cooperate with the appropriate agencies.”•

2 thoughts on “BEHIND THE NEWS: A flawed culture poisoned Celadon”