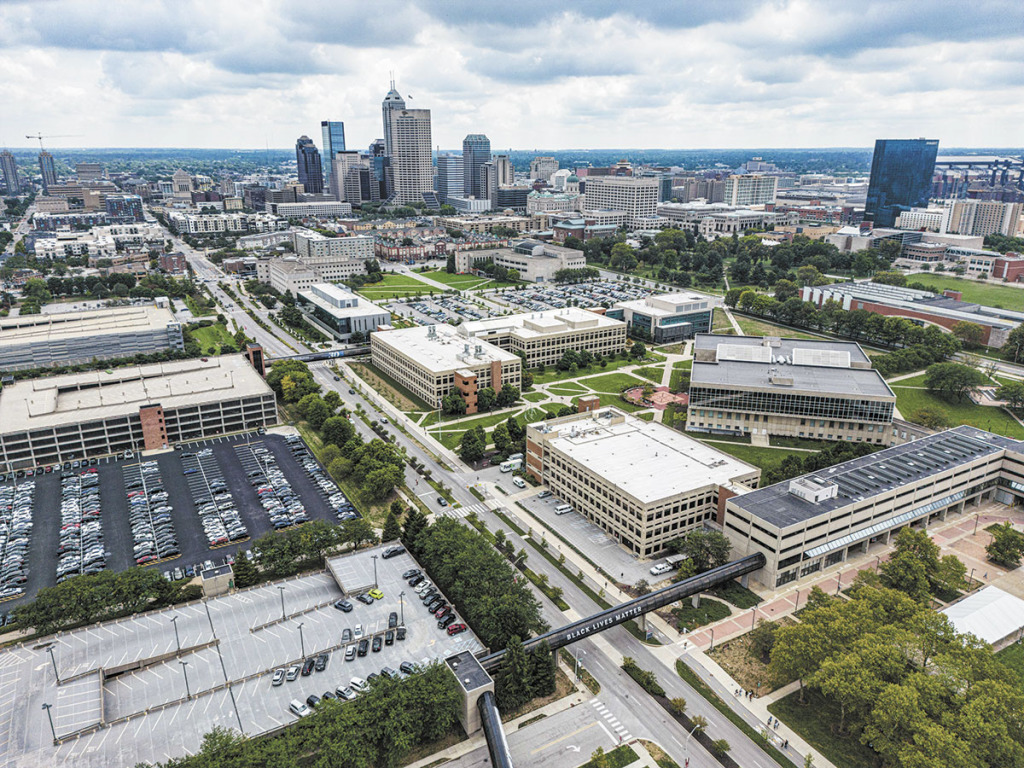 Sheila Snider oversaw dozens of architectural projects on the IUPUI campus in the 1980s and 1990s.

Over a career in architecture spanning more than 40 years, Sheila Snider was involved in helping shape downtown Indianapolis and other parts of the state.

She helped advance dozens of projects at IUPUI and in state administration, in addition to helping create the White River State Park. She spent nine years as director of public works for the Indiana Department of Administration, where she was responsible for design and construction of more than $600 million in public facilities. She served four years as city planner in Bloomington and 16 years as associate university architect for the IUPUI campus, overseeing design and construction of campus facilities.

Snider didn’t immediately pursue architecture in Indiana after graduating from Martinsville High School in 1966 because choices were extremely limited, especially for women. So she studied interior design at Parsons School of Design in New York and engineering at Purdue before enrolling in the recently-established college of architecture and planning at Ball State University. In 1974, she became the first woman to graduate with an architecture degree from Ball State.

Earlier this year, the state’s sanctioning body for architecture recognized Snider’s contributions to the field with its highest honor. IBJ discussed the award with Snider, as well as her connection to various local projects.

How did you come to be interested in architecture as a career?

Well, I my father was in construction and mother was a graphic artist, so I had some ideas as I was growing up about what I wanted to do. But generally, people told me, ‘Oh, girls don’t do that.’ And when I was in high school, I wanted to take [architectural] drafting and I was told that girls don’t do that, either. So of course, I had to do it—I wanted to be an architect. It took a couple of years, but I had strong resolve.

You’ve been involved in a lot of projects during your time in the industry, including various projects at IUPUI and in roles with the state’s Department of Administration. What projects stick out to you the most, looking back?
One of my favorites is the renovation and repurposing of the Madison State Hospital during my tenure. I think it’s been repurposed again since I left, but the conversion at the state hospital and the saving of some of the historic buildings on the campus, I was proud of that.

Another of your projects, and arguably the most impactful, was the creation of White River State Park on the western edge of downtown, back in 2000. I understand you were integral to that project. How do you recall that project and what led to its completion?
It was quite a unique project, given that such a large amount of space in the downtown area was a available for development. I don’t think many cities would have been able to develop that. And it was it was a lengthy project, too, with partnerships with the Indiana State Museum, the NCAA and the Eiteljorg. It was so important to the city and to the state, because there were so many unique opportunities within the overall vision for that site. It also gave me an opportunity to work with some of the most important people in the state to fine tune these tremendous ideas. It was really memorable.

Are you are you still active in the local architectural community?
To a very limited extent, yes, but I’m not participating in projects. I’m mentoring some architects as they’re preparing to apply for fellowships, and every once in a while I get pulled into a jury or a committee.

What are some other things you’ve accomplished in your career that you look back on fondly?

You’re talking about a very long career, here. But I was fortunate to work with architects from Romania and [mentor] them. That was a very interesting and impactful experience. It was just months after the fall of [Romanian leader] Nicolae Ceaușescu in 1989, and I was one of about a dozen people who went to Romania and put on a workshop for architects and contractors and engineers, and we followed that up with a program to place some in those professions in apprenticeships here. It was really something I was glad to be involved with.

In October, the American Institute of Architects Indiana recognized you with the Gold Medal award, its highest honor, which is bestowed to architects that have made significant contributions to the field. What does it mean to you to have received that award or that recognition?
Well, I was surprised, because I didn’t know I was being considered for it. Of course, I was also honored by the designation because it’s such a tremendous recognition. I also know there were who were much more qualified than myself. But I appreciated being recognized, especially having been retired for many years. Someone still remembered that I had a role in doing something good.