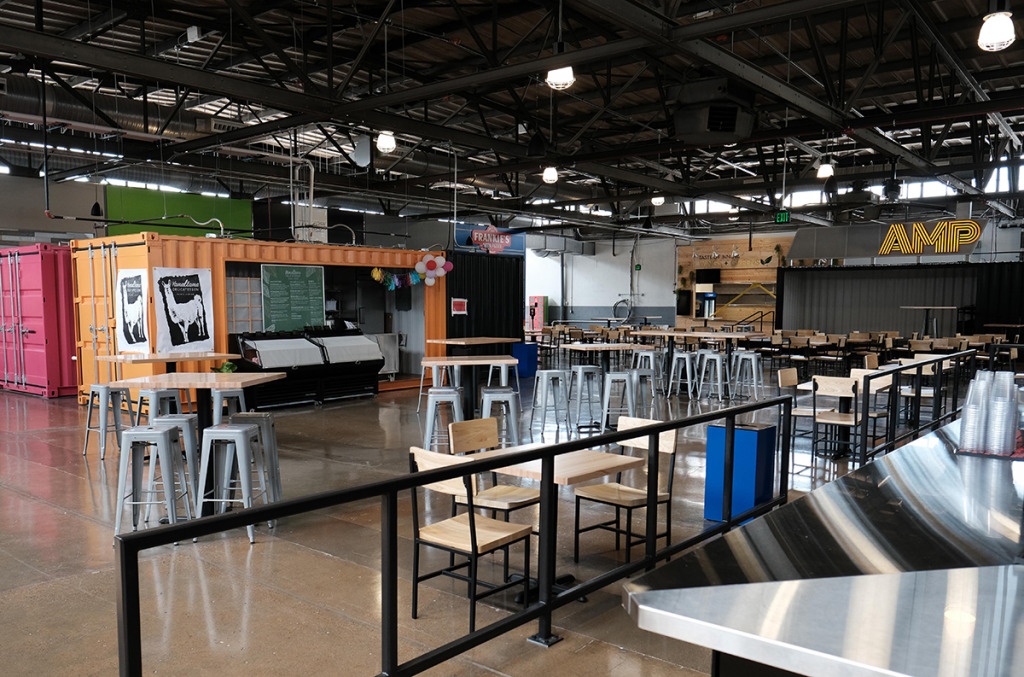 The AMP will include traditional vendor spaces and shipping containers for some businesses. (IBJ photo/Eric learned)

Nine of the 20 signed tenants at 16 Tech’s artisan food hall, The AMP, have already opened for business. And most of the rest are set to do so before the facility’s grand opening June 21-27.  (See below for tenant descriptions.)

The AMP is a 40,000-square-foot space in the HqO building at 1220 Waterway Blvd., on the campus of 16 Tech, just north of IUPUI. The facility was built in 1959 to house the Indianapolis Water Co. Other HqO tenants include 1776, a co-working space; and Machyne, a maker space. Both opened in March.

The AMP features vendor spaces feature both walk-up restaurant stalls and converted shipping containers, as well as a stage and seating area designed to host gatherings and special events.

All but one of the signed tenants operates a restaurant or other food- or drink-focused establishment, ranging from coffee-and-dessert places to a deli, fish market, pizza parlor and more. Two more vendor spaces are available.

“We have a little bit of every cuisine,” said restaurateur and chef Craig Baker, who designed The AMP and oversees its operations.

Of these businesses, 65% are minority- or woman-led or owned business. And 56% of the businesses are new concepts.

Still to come is Melon Kitchen, a restaurant accelerator for Black chefs. The three-month program will take five chefs at a time through a curriculum where they learn the business aspects of running a restaurant, while also making and selling food to The AMP’s patrons. The program is expected to launch within the next few months.

The AMP’s big-picture goal, Baker said, is to provide a place where chefs and restaurateurs can build their businesses and develop a following.

“I want to find out who the next Jon Brooks is,” said Baker, referencing the renowned local chef who operates restaurants Milktooth and Beholder.

To that end, rent costs as little as $20 a day, utilities included, for the 20-foot shipping containers, which represent the smallest of the vendor spaces.

And The AMP’s event space, which could be used for anything from concerts to lectures to a farmer’s market, creates a potential catering opportunity for vendors.

“It is really designed to be more of a community center than a food hall,” Baker said of The AMP.

The AMP is open six days a week. Hours are 7 a.m. to 10 p.m. Mondays through Thursdays, and 7 a.m. to 11 p.m. Fridays and Saturdays. Individual tenants’ hours may vary.

Details on the tenant lineup:

Boba and Everything: A bubble tea and bagel shop owned by Liza Christian.

Fresko: Italian and Latin cuisine including traditional pastas, Latin street foods and a fusion of both. Owner is Kevin Pillco.

Poke Guru: Rice, seafood and other sushi ingredients served in a bowl with scratch-made sauces. Owner Adam Odgaard also has locations at City Market and The Garage Food Hall.

3 thoughts on “Artisan marketplace at 16 Tech adds tenants, amps up for grand opening”