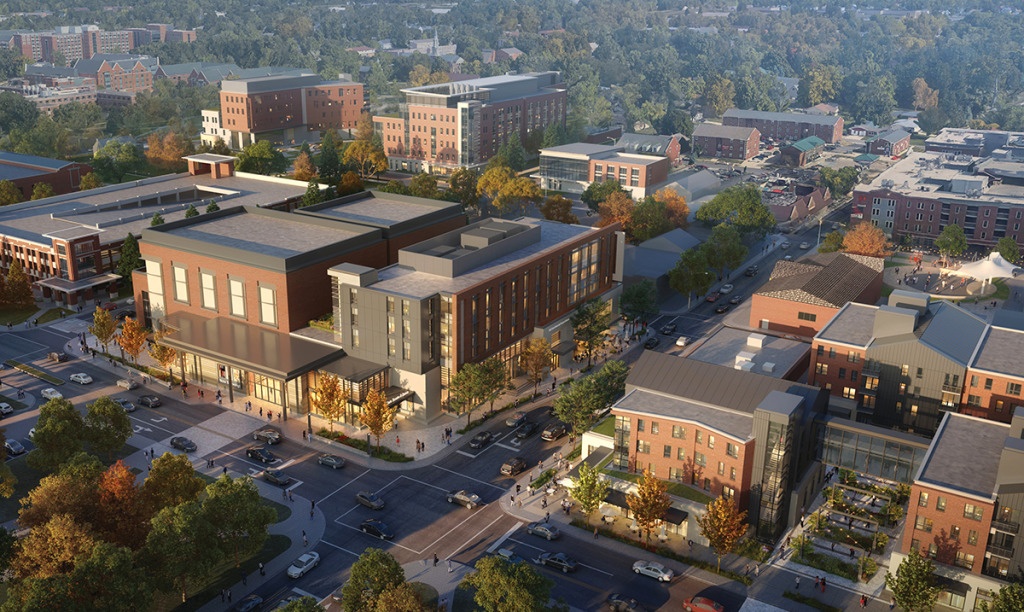 In this conceptual rendering, Ball State University's planned performing arts venue is located on the block in the left half of the image (on the northeast corner of the intersection of McKinley and University avenues), and projects by Fairmount Properties would be located in adjacent and nearby blocks.

Ball State University plans to revitalize the declining Village business and culture district adjacent to its Muncie campus by creating a performing arts center and green-lighting an Ohio-based firm to develop a hotel, apartments, retail spots, and spaces for office and research work.

On Friday, the university’s board of trustees authorized BSU President Geoffrey S. Mearns to sign a memorandum of understanding with Orange Village, Ohio-based Fairmount Properties, which specializes in multi-use, campus-edge projects.

According to the university, Fairmount will invest approximately $100 million to design and construct the hotel, residential properties and commercial spaces.

Details on size, location and cost are sparse, as the different elements of the project have not been designed yet, a university spokesman told IBJ. And it’s not clear yet how the project would affect existing buildings and businesses.

“Since responding to the University’s [request for proposals], our team has worked diligently with the Ball State leadership team to refine our strategy,” said Fairmount founder and principal Randy Ruttenberg in a media release. “We met with various community stakeholders over the past year, and we connected with many current merchants and property owners in the Village. We will use a district-wide approach to elevate the Village, and we look forward to collaborating with existing merchants and future tenants to do so.”

The university still must finalize a development agreement with Fairmount, which it expects to be signed by the end of 2022. Construction is tentatively scheduled to begin in 2024.

“This important revitalization on the edge of our beautiful campus will attract community members from throughout our region, enhancing the appeal of our University and our city,” Mearns said in a media release. “For residents, this work will enhance the quality of place in Muncie. And for businesses, this work will promote talent retention and spur economic growth. I am grateful to our trustees for their support for this vital initiative.”

The featured player of the revitalization plan is the performing arts center, to be located on the vacant land on the northeast corner of McKinley and University avenues. The timeline for construction would roughly follow the schedule for the other elements of the Village revamp.

The plan calls for two performance venues in the center, to be used by the university’s theater and dance students. The university expects it to host 160 university performances and draw more than 35,000 attendees to the Village each year.

The performance center is still in the planning stages and has no cost estimate yet, according to a university spokesman. Its price would be covered by the university and donors.

Many university productions and other large-scale performing events currently are staged in the campus’ 3,300-seat Emens Auditorium, which opened in 1964.

According to a university spokesman, the new performing arts center “will be used in concert” with Ball State’s other performance venues, including Emens Auditorium, Pruis Hall, Sursa Performance Hall, and Hahn Recital Hall.