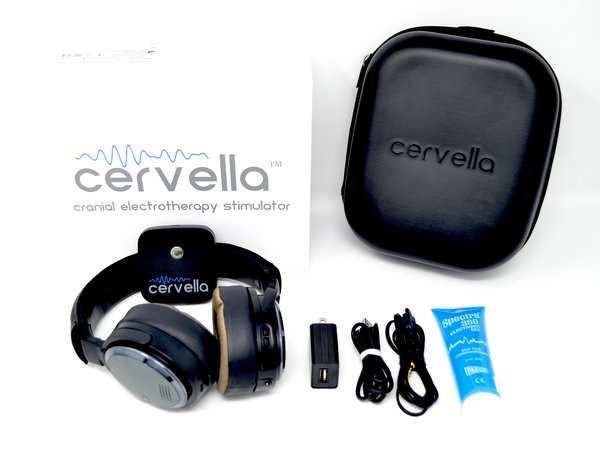 Bart Waclawik, founder and owner of Innovative Neurological Devices, has integrated electrotherapy technology into a headset that can be used to treat anxiety.

A Carmel entrepreneur has developed a way for people who suffer from anxiety, depression and insomnia to receive an on-the-spot treatment that is hidden from everyone around them.

Bart Waclawik, founder and owner of Innovative Neurological Devices, has integrated electrotherapy technology into a headset that looks like those commonly used to enjoy music or cancel noise.

The device, manufactured in Singapore, won a Mira Award earlier this year for Innovation of the Year, and now Waclawik said he’s winning over doctors and medical providers with his invention.

“If we can get doctors to see a demonstration, we are getting a very strong reception,” Waclawik said.

He said his company is close to closing a deal with a sizable treatment center in Ohio that could significantly boost revenue. The company is currently focused on the U.S., but could expand globally he said, though he admitted getting regulatory approval in foreign markets can be a challenge.

The technology, called cranial electrotherapy stimulation, sends micro pulses of electrical current across the brain between the headset’s ear pads. Cranial electrotherapy stimulation has been approved for years by the U.S. Food and Drug Administration to treat anxiety, depression and insomnia, but users often resisted attaching electrodes to their ears or other areas of their heads. Young people in particular were reluctant to use the equipment out of fear of being teased while at school or elsewhere in public, Waclawik said.

“You often have to treat anxiety when and where it happens, not in the comfort of a patient’s home,” Waclawik said.

Waclawik, a 43-year-old native of Poland, came to the U.S. as a high school exchange student and subsequently earned a scholarship to study physics at Wabash College. He came up with the idea for the headphones after watching a close family member struggle with existing products. He said his family member got significantly better within three to four weeks of beginning to use the headphones he invented.

“With this product, no one needs to know you are receiving a treatment,” said Waclawik, who also earned an electrical engineering degree from Purdue University and an MBA from the University of Notre Dame. “Before these headphones, this technology was very cumbersome, and in some cases attaching the electrodes to the ears was quite painful.”

Waclawik’s Cervella headphones integrate the electrodes into the ear pads, out of sight. He also designed Cervella to be controlled by a smartphone app, to make treatments simple to customize and to gather data for analysis by a patient’s doctor. Users can listen to music or cancel distracting noises during treatments. The headphones, Waclawik said, can be used as a supplement to drugs or in some cases in place of them.

And he offers a trial period in case they don’t work for a particular person.

The treatments, which typically last for about 30 minutes, can work for a day, a week or longer depending on the individual, explained Waclawik, who previously was part-owner of AMD Lasers, an Indianapolis-based maker of surgical lasers.

The headphones that Waclawik invented have been approved by the U.S. Food and Drug Administration and are patent pending.

The devices can only be purchased—for $695—with a doctor’s prescription. The company, which was founded in May 2017, didn’t start shipping headphones until this July, and already has sold more than 300 units. And while Waclawik hasn’t yet recovered the high six-figure investment he’s made in the company he said “monthly cash flow is strong” for the company with six full-time employees. He has no outside investors.

“Given that 18% of the U.S. population suffers from some sort of anxiety or depression, the addressable market is sizable,” Waclawik said.

Waclawik isn’t finished inventing. He believes the technology can be used to help relieve anxiety during withdrawal from alcohol or drugs including opioids.

“The potential for this technology could be very, very big,” he said.