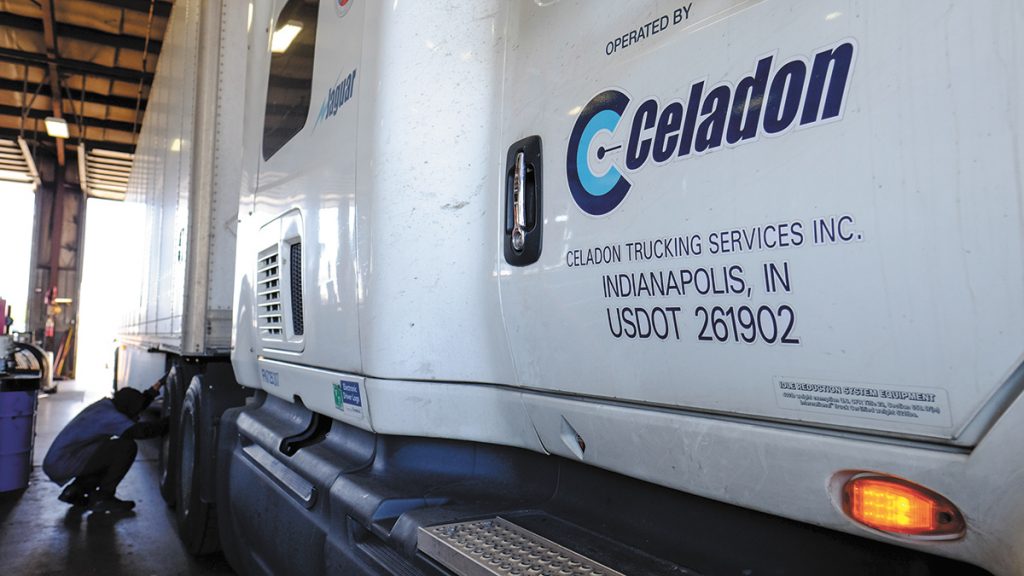 Celadon Group Inc. filed for Chapter 11 bankruptcy Dec. 9  and said it had given up trying to restructure its operations and is shutting down immediately—a move that wiped out nearly 4,000 jobs.

The announcement brought to a bitter close one of central Indiana’s great entrepreneurial success stories. Stephen Russell, the son of a New York City taxi driver, launched the business with a single truck in 1985 and grow it into the largest provider of international truckload services in North America, with more than 150,000 annual border crossings between the United States, Canada and Mexico.

But the Indianapolis-based company lost its way after Russell stepped aside as CEO in 2012, four years before his death at age 76. In addition to operational challenges in recent years, Celadon became engulfed in what federal prosecutors called a massive accounting fraud. Prosecutors this year announced fraud charges against three former executives.

In a written statement, CEO Paul Svindland, who was brought into the company in 2017 to clean up the mess, said the challenges proved too great to overcome.

“We have diligently explored all possible options to restructure Celadon and keep business operations ongoing,” he said. “However, a number of legacy and market headwinds made this impossible to achieve.

“Celadon has faced significant costs associated with a multi-year investigation into the actions of former management, including the restatement of financial statements.  When combined with the enormous challenges in the industry, and our significant debt obligations, Celadon was unable to address our significant liquidity constraints through asset sales or other restructuring strategies.”

Prior to the shutdown, Celadon had nearly 4,000 employees and was operating a fleet of about 3,300 tractors and 10,000 trailers.

Through the years, Celadon expanded to offer a broad range of trucking-related services, including warehousing, supply chain logistics and tractor leasing.

Celadon filed its Chapter 11 petition in Delaware. In the filing, the company said it has assets of about $427 million and debts of $391 million. The company, which estimated it has 5,000 to 10,000 creditors, will file more detailed financial information in the coming weeks.

As recently as this summer, Celadon’s turnaround efforts had appeared to be gaining traction. On July 31, the company announced that it had obtained $165 million in new financing, which Svindland described at the time as “a solid platform for the next stage of our business turnaround.” The company said it intended to use the financing to update its aging trucking fleet.

But in a filing in bankruptcy court, Celadon Treasurer Kathryn Wouters said that around that time, business conditions for Celadon and other trucking companies took a precipitous turn for the worse.

Adding to the challenge were the costs and distractions of a multi-year federal probe into allegations of accounting fraud at the company.

In May 2017, the company announced that its auditor, BKD LLP, had lost confidence in Celadon’s recent financial reports, and that investors should not rely on the accuracy of those reports.

On Dec. 5, the U.S. Department of Justice announced that Celadon’s former president and chief operating officer, William Eric Meek, 39, and its former chief financial officer, Bobby Lee Peavler, 40, had been indicted on multiple charges of fraud.

The U.S. Securities and Exchange Commission filed a civil suit against Meek and Peavler the same day.

Both the civil and criminal cases allege that the former executives were involved in buying and selling trucks at inflated values through Celadon subsidiary Quality Cos. in 2016 to make Celadon’s financial condition appear stronger than it actually was.

Also in April, Celadon entered a deferred prosecution agreement with the government under which it agreed to pay restitution of $42.2 million.

Celadon admitted last July that it was under criminal investigation over financial-reporting issues dating back to 2013.

In October 2017, the company revealed that it was under investigation by the SEC. And, in April 2018, Celadon said its problems were much older and deeper than expected, and that the company had likely overstated earnings by as much as $250 million during a three-year period that ended in 2016.

The company replaced most of its senior leadership team, including its CEO and chief financial officer. The firm also refocused on its core trucking business and exited several other lines of business.•