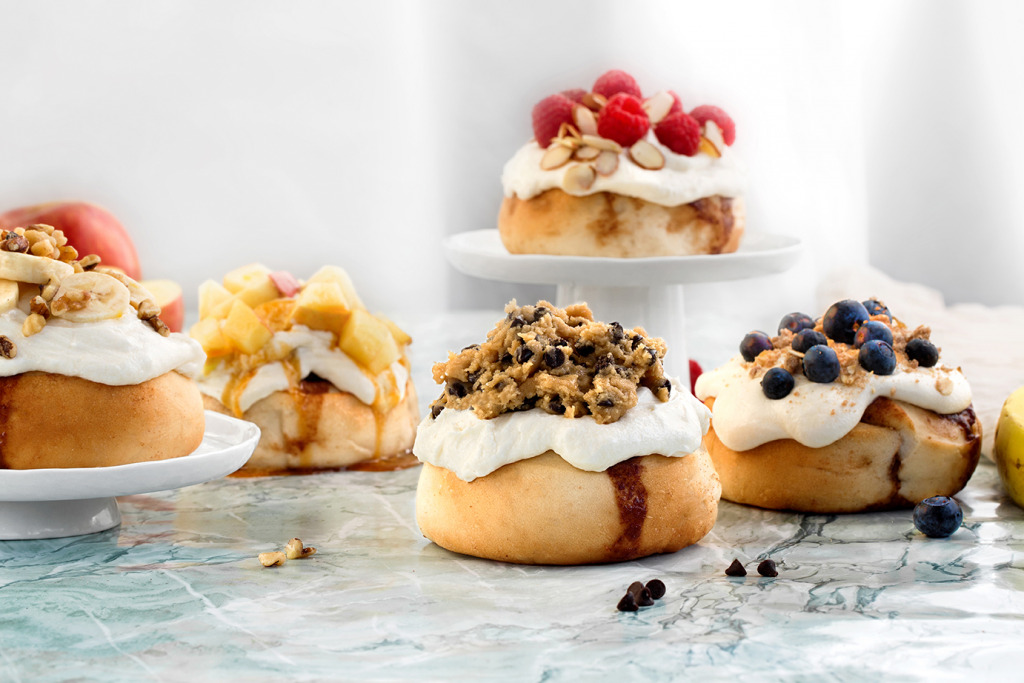 Cinnaholic, a fast-growing Atlanta-based chain of vegan bakeries, will open its first shop in Indiana on Friday in Carmel.

The bakery at 1350 S. Rangeline Road will focus on Cinnaholic’s customizable line of plant-based, allergen-friendly cinnamon rolls. Customers will choose from more than 20 frosting flavors and 20 topping choices.

Fishers residents Sanya and David Strawser and their neighbor Manjit Kaur will own and operate the store in Carmel.

Sanya Strawer told IBJ that she and her husband, who have a 9-year-old son, looked for an investment opportunity that catered to people like those in her family who have allergies. She learned about Cinnaholic and visited one of the company’s stores in New Jersey over the New Year’s holiday, which she called “spectacular.”

“This is one of the most unique concepts,” she said. “It does not fit a bakery. It doesn’t fit a restaurant. It doesn’t fit any of those. It’s just unique. Everything is scratch-made that day.”

All the treats made at Cinnaholic are vegan and made without dairy, lactose, eggs or cholesterol. Sanya Strawser said the shop will have nuts available, but employees will be mindful of people who could be allergic.

Sanya Strawser said she is looking forward to getting behind the counter and working with a staff of about 15 employees.

“I’ll be getting my hands dirty. It’s fun,” she said. “Everything’s very fresh, very unique, and it’s a really fun environment, so it’s not stressful.”

Shannon and Florian Radke founded Cinnaholic in 2010 in Berkeley, California, and later moved the company to Atlanta. They appeared in 2014 on ABC’s business reality television series “Shark Tank” and received an offer from investor Robert Herjavec, which they later declined.

Cinnaholic adopted a franchise model in 2015, and the company has grown to more than 70 locations in the United States and Canada with more than 30 shops in development and 50 additional bakeries anticipated for 2023.