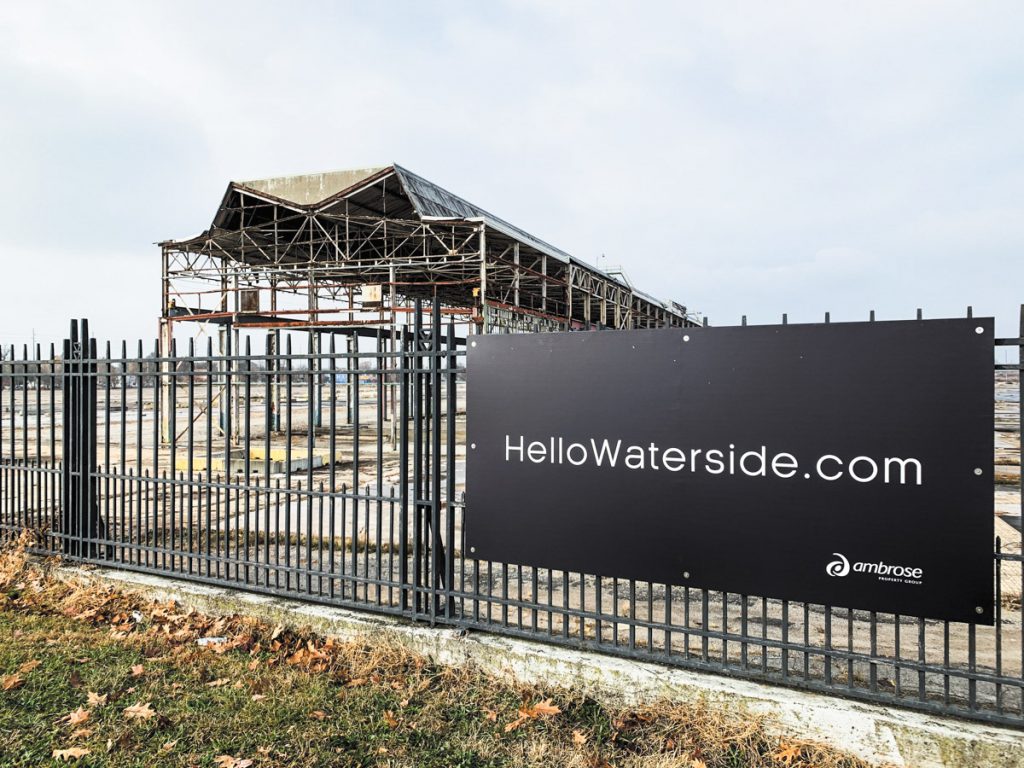 Ambrose bought the stamping plant property for $3 million in 2017 and says it has put millions into the site since then, although there is no obvious development there. Now, it says the land is worth $65 million or more. (IBJ photo/Lesley Weidenbener)

The city of Indianapolis has asked a Marion County judge to permanently dismiss a lawsuit filed late last year by Ambrose Property Group over the city’s threat to take possession of the former GM stamping plant site.

In its motion to throw out the case, filed Wednesday in Marion Superior Court, the city asserted locally-based Ambrose—which in September withdrew from its $1.4 billion Waterside development project at the stamping plant property—failed to make persuasive enough legal arguments to move the suit forward to a trial.

The firm sued the city in mid-November, after city officials sent a letter to the company threatening to take the 91-acre site on the edge of downtown from Ambrose, by eminent domain if necessary, to ensure the property is developed.

Ambrose claimed the city committed a breach of contract with the threat, because a clause in a 2018 project development agreement for the property states the city cannot forcibly take the property.

TIMELINE: How the dispute over Waterside unfolded

But the city hit back at Ambrose’s claims in its latest motion, which will be considered by Judge Tim Oakes during a hearing Jan. 31. It asserted the legal arguments made by the company in the case “fail as a matter of law” and are grounds for the case to be dismissed with prejudice—meaning the matter could not resurface in a new filing.

“Unwilling to acknowledge that it walked away from a deal it hurried to sign […] Ambrose instead asserts that the collapse of its project is somehow the city’s fault,” the city’s motion states. “But no matter what gloss Ambrose attempts to apply, its claims fail for fundamental legal reasons apparent in its complaint.”

The city’s 16-page filing to dismiss focuses on three areas:

—that Ambrose’s claims are unripe, since a threat alone does not necessarily constitute a breach of contract;

—the city retains a sovereign right under Indiana law to use eminent domain, regardless of contractual language stating otherwise;

—and that the company waived its rights to damages (perceived and actual) as part of the 2018 agreement.

The filing said that while the their consideration of whether to use eminent domain was opposed by Ambrose, public officials “surely must be able to deliberate, gather facts, and even generate public discussion on whether to do so as a formal matter.”

Ambrose began marketing the land and development plans for Waterside to other private firms by the time the city threatened to take it if the parties could not work out a deal for the property. Ambrose said the threat halted its efforts to sell because development companies did not want to be dragged into the dispute.

Ambrose said in late October the city also made an offer of $6 million—public officials have said no formal offer was ever made—despite the land being valued “at a conservative $50 million” in an appraisal and the company’s estimate that the land would be worth $65 million to $100 million on the open market. The company has not provided documentation to the court or to IBJ supporting claims about the land’s value.

The motion to dismiss is not altogether unexpected, as the city’s request for dismissal was one of several items discussed during a closed-door, early-December hearing on the dispute. At that time, Oakes also forbade the city from pursuing eminent domain until the case is resolved.

Oakes in early January granted a city a motion to dismiss the Indianapolis Department of Metropolitan Development—which was the party that signed the agreement with Ambrose—from the ongoing lawsuit.

But that dismissal was vacated Jan. 16 after the firm asked the judge to reconsider, bringing DMD back into the fold.

Ambrose said in a statement that it would let its “filings speak for themselves and look forward to a resolution to this dispute.”

Donnie Morgan, chief corporation counsel for the city, said the city does not comment on pending litigation “out of respect for the judicial process.”