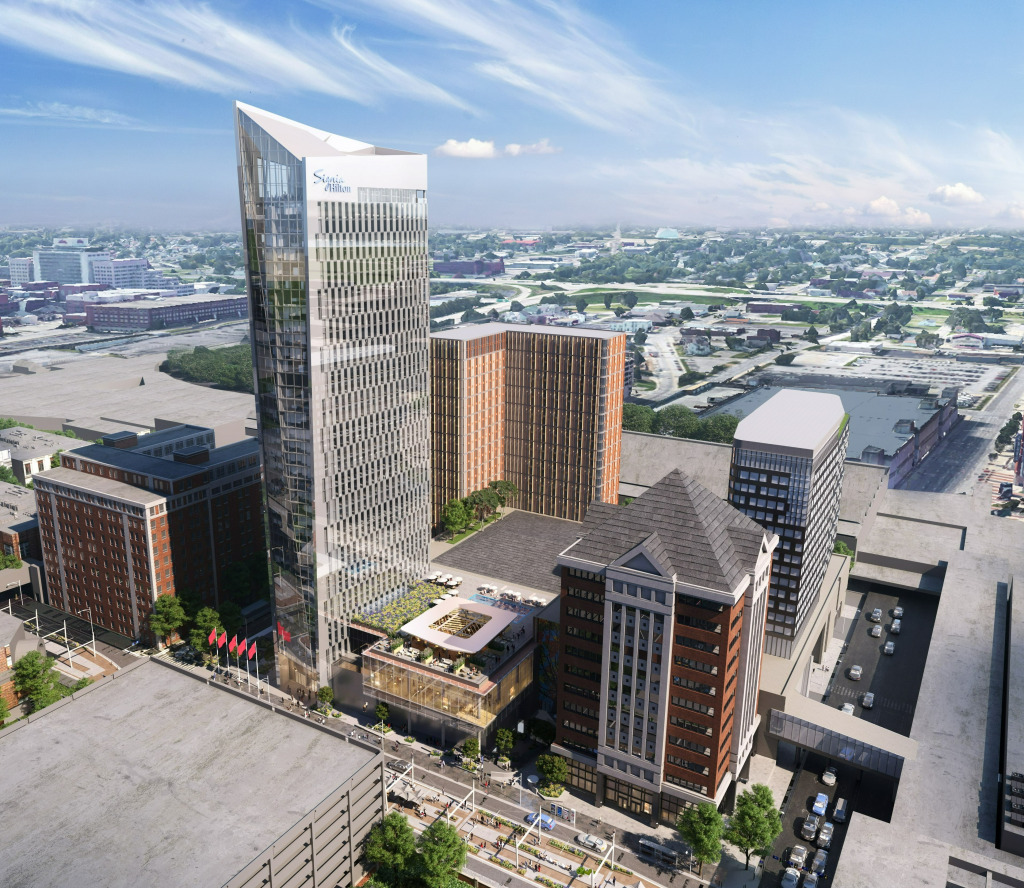 A rendering of the proposed redevelopment of at Pan Am Plaza in downtown Indianapolis. (Courtesy of Kite Realty Group Trust and Ratio Architects)

A city commission this week is set to consider providing an additional $25 million to the redevelopment of Pan Am Plaza in downtown Indianapolis.

The allocation, which would come from the city’s downtown consolidated tax-increment financing district, will be considered during a Metropolitan Development Commission meeting on Wednesday.

The $550 million project includes a $125 million expansion of the Indiana Convention Center—which the city is paying for—as well as an 800-room hotel being developed by local developer Kite Realty Group Trust. A second 600-room hotel is planned for a later phase of the project.

The resolution calling for the new funding, part of the commission’s meeting agenda, does not specify what the money would be used for, except to say it would go toward “the payment of expenses associated with the project and other local public improvements furthering the redevelopment of Pan Am Plaza.”

The allocation would not create additional taxes downtown, but instead tap into tax revenue already on-hand in the city’s coffers. Unallocated TIF dollars are generally used for development projects in which the city has a direct interest.

The Pan Am redevelopment was first announced in 2018, but the deal was refined in the wake of the pandemic in 2020, with initial plans for Kite to secure funding and break ground on the project by the end of 2022. Kite has not shared whether it has secured financing for its portion of the project.

The city in 2021 authorized up to $155 million in bonds for its portion of the project, but those have not yet been secured through the Indianapolis Bond Bank. The figure takes into account property acquisition, interest, procurement fees and other legal costs.

However, the MDC on Wednesday will also consider adjusting how much interest the the bonds can carry amid ballooning rates. The same resolution would authorize maximum interest rates of up to 8% rather than the 5% that the project can currently bear. The Indianapolis City-County Council on Monday night approved a similar measure.

Increasing the interest rate will mean higher costs on repayment of the loan, which is expected to take anywhere from 25 to 30 years, depending on terms secured through the Indianapolis Bond Bank.

Both the Department of Metropolitan Development and the Capital Improvement Board, which operates the convention center, declined comment on the resolution. Kite could not be reached for comment.