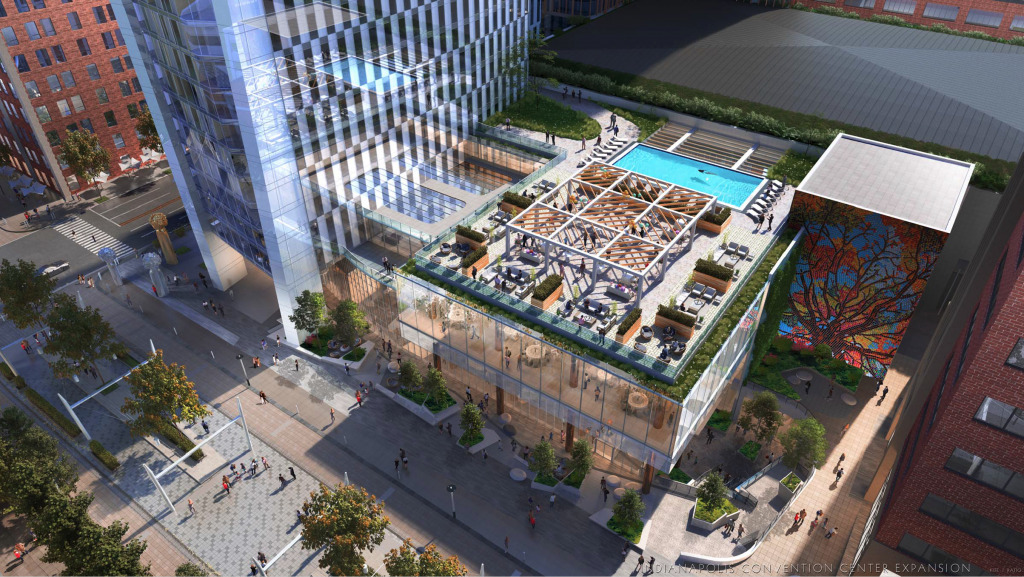 This rendering looks down on part of the Signia Hilton hotel along Georgia Street. (Rendering courtesy of Ratio and Kite Realty Group Trust)

Construction on a $550 million Pan Am Plaza hotel and convention center expansion project will be delayed by up to two years—to the second half of 2022—as part of a development deal made public Tuesday by city officials and Indianapolis-based Kite Realty Group Trust.

Officials say the new timetable is intended to give downtown’s hospitality industry time to recover from occupancy and revenue challenges created by the coronavirus pandemic, as national analysts project the nation’s tourism market will be on the mend well into 2023. It will also give Kite time to find financing for the first hotel for the site—a $300 million, 40-story Signia Hilton—that will not receive a public subsidy or incentives.

The redevelopment, first announced in October 2018, includes a $125 million addition to the Indiana Convention Center—which will be funded by a bond that needs approval from the Metropolitan Development Commission and City-County Council—and two privately developed hotels with a total of 1,400 rooms. It will occupy most of the block south of Georgia Street, between Illinois Street and Capitol Avenue.

The deal between Kite and the city means the Signia wouldn’t open until at least 2024 or 2025. Construction of the second hotel couldn’t start until at least two years after the first hotel’s opening—and likely later than that.

A development agreement for the project has been in the works since early 2019, after Kite was selected through a request for proposal process led by the city and the Capital Improvement Board, which manages the convention center.

The planned 300,000-square-foot convention center expansion includes a 50,000-square-foot ballroom—which would be the largest in Indiana—and a pedestrian skybridge spanning Capitol Avenue. The new Hilton-brand hotels would add 800 rooms and 600 rooms, respectively, to the downtown market.

Kite acquired the 1,200-space parking garage beneath Pan Am Plaza for $30 million in March 2019, and plans to fully rebuild the structure while razing the remainder of the plaza for the convention and hotel project. The Pan Am office tower at Capitol and Georgia would not be affected.

City officials had initially eyed starting construction by the end of 2019, but several delays caused those plans to shift into 2020. The proliferation of COVID-19 led to further delays, making a final deal for the project a moving target before details were finalized over the weekend.

The ritzy Signia (one of only three planned in the United States) is expected to be built at the southwest corner of Georgia and Illinois streets and cost about $300 million.

The white glass, curtain-walled building, designed by Indianapolis-based Ratio Architects Inc., is expected to stand 40 stories—or 472 feet—making it the fourth-tallest building (and the tallest hotel) in the state. The hotel will employ about 400 people with a starting wage of $14 per hour.

Under its agreement with the city and CIB, Kite is required to start construction on the hotel and convention center expansion by the end of 2022, although an exact date has not yet been finalized. Construction on the towering hotel would likely last up to three years, Kite officials said.

“We want to be realistic about the timeline for starting,” said Matthew Gabet, senior vice president of operational strategy for Kite. “We have to start by the end of 2022, so that gives us a little bit of time for the financial markets to come back, for the industry to come back. While we’re moving forward with getting this thing off the ground, we do have flexibility in there from a start perspective to make sure the project is feasible.”

The decision to delay construction is intended to give the Indianapolis hospitality industry—which has been among the strongest detractors of the project—time to recover from the steep decline in tourism and business travel during the pandemic.

Even before the health crisis, the owners of several hotels—including the JW Marriott and Downtown Marriott—argued that the new hotels could cause a glut in the market and drive down occupancy rates downtown.

Tennessee-based hotel research firm STR in June published a forecast for the national hotel market’s recovery, with projections showing demand will begin rising in 2021 and continue into 2022. The industry is expected to recover to pre-pandemic levels by mid-2023.

The hotel portion of the project will not be taxpayer-subsidized. Instead, it will be financed solely by Kite through equity and other funding resources, including loans, although the firm has not yet procured financing for the project.

Thomas Cook, chief of staff for Mayor Joe Hogsett, said the absence of a subsidy on the hotel portion of the Pan Am project is a first for the city on a public-private partnership involving lodging.

“It’s a pretty simple financing structure,” Cook said. “Unlike every other previous iteration of the convention center expansions, or frankly just hotel developments writ large, we are not contemplating this as a direct developer subsidy.”

The last expansion of the convention center, completed before Indianapolis hosted the Super Bowl in 2012, included the development of the $450 million JW Marriott hotel complex, for which Merrillville-based White Lodging and Carmel firm REI Investments received about $55 million in subsidies from the city.

Construction on the second Hilton would not begin for at least two years after the Signia opens “assuming the market stabilizes,” said Gabet.

The city’s deal with Kite requires the Signia to log two consecutive years with at least 72% occupancy during its first five years of operation before work on the second hotel can start.

The second hotel is expected to cost between $100 million and $125 million be built adjacent to Union Station, directly south of the Signia and east of the expanded convention center. It is expected to employ about 200 people.

While the hotel may have some of its own meeting space—the amount has not yet been determined—it will also share the convention center expansion with the CIB through a joint operating agreement. Such a deal would allow both the city (through Visit Indy) and Hilton to market and rent out the space included in the expansion, based on calendar dates.

Andy Mallon, executive director of the CIB, said “the finer points are not written down” yet, but generally Visit Indy is responsible for calendar dates at the convention center beyond 14 months, while CIB staff oversees everything inside that window. Mallon said he anticipates a similar arrangement with Hilton as part of the expansion project.

The arrangement would give Hilton the opportunity to book events like parties, weddings, graduations and other events that are generally handled on a shorter-term basis while giving Visit Indy an edge in landing larger conventions that need to use the massive planned ballroom and other meeting space in the facility.

About 143,500 square feet of the expansion would include the ballroom (which, in addition to being the largest in the state would be 10th largest in the nation), as well as meeting and pre-function spaces, such as lobbies. The remainder of the added footprint would come from back-of-house space hallways, and the skybridge connecting the expansion to the rest of the convention center.

Many conventions—including ones by groups such as National FFA, Gen Con and FDIC International—have credited the convention center expansion as reasons they plan to stay in Indianapolis over the next several years, particularly as their conventions continue to grow. Gen Con and FFA have both extended their contracts through 2026 and 2033, respectively.

The city began planning for the current expansion effort in 2014, when groups said they were starting to outgrow the city. That was just three years after the conclusion of the last expansion effort—a $275 addition that doubled the size of the convention center and included construction of Lucas Oil Stadium.

Chris Gahl, vice president of Visit Indy, said without the expansion, the city could lose a great deal of its business—about $287.7 million in visitor spending from annual conventions.

More importantly, he said, the city could generate new leads for other conventions that can’t come to Indianapolis now because the city lacks the convention and hotel capacity. Gahl said more than 200 conventions (worth about $1.1 billion in economic impact) have been interested in coming to Indianapolis, but the city has lacked either enough convention space or enough hotel rooms.

The expanded convention center is designed to allow the city to host two major conventions simultaneously.

To finance the convention center expansion, the city plans to issue $150 million in bonds that would be paid back through tax-increment financing over 25 years.

The city expects debt service on the project to run about $10 million each year.  It will use increased property tax revenue from the first hotel, estimated to be about $5 million annually, coupled with funding from the existing downtown TIF district, to pay off the bonds.

Annually, the city provides the CIB with about $8 million from the downtown TIF district for operations. A portion of that funding—about $5 million—would be redirected to bond payments.

The bonds would only be used to pay for the publicly owned assets of the convention center expansion, including the 50,000-square-foot ballroom, the covered walkway connecting the expansion to the existing building across Capitol Avenue and infrastructure improvements on Georgia and Illinois streets.

Combined, those aspects of the project are expected to cost $125 million. The other $25 million comes from capitalized interest, which would cover early bond payments, and financing costs associated with issuing the bond.

Kite will pay to rebuild the underground parking garage, although a projected construction cost has not yet been made public. It will also retain ownership of the land on which the convention center expansion would be built, with the city expected to sign a long-term lease.

The Metropolitan Development Commission, the Indianapolis City-County Council and the Indianapolis Bond Bank must give approval for the city to take on the debt and finalize its deal with Kite.

The financing structure will be introduced to the Metropolitan Development Commission Aug. 5 and to the City-County Council on Aug. 10.

3 thoughts on “City, Kite reach deal for $550M Pan Am Plaza project—with up to 2-year delay”