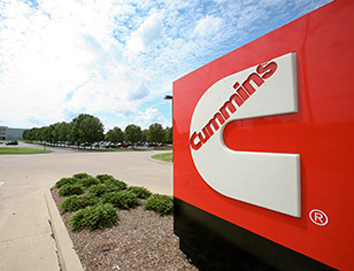 Indiana-based Cummins Inc. on Thursday reported that its third-quarter profitability decreased even as revenue climbed.

The manufacturer’s third-quarter revenue was $7.3 billion, up from $6 billion during the same period of 2021.

Shares of the company were trading at $231.74 at noon Thursday, down 4% from Wednesday’s closing price.

Cummins said its profitability was affected by several expenses last quarter, the largest of which was the $56 million that the company spent on a one-time bonus to employees.

“We felt very strongly that, given the tremendous effort of our employees over the last 18 months … We felt that this one-time recognition was very appropriate,” CEO Jennifer Rumsey said during a Thursday morning call with analysts.

Other costs last quarter included $25 million associated with the acquisition and integration of Meritor Inc. The Meritor acquisition was finalized in August. Cummins also cited $16 million in costs related to its previously announced plans to spin off its filtration business into a separate company. That spinoff has not yet taken place.

Excluding the Meritor acquisition and related costs, Cummins said its profit would have been $456 million, or $3.21 per share.

Also on Thursday, Cummins announced that it is continuing to gain momentum in its hydrogen business, which currently represents a tiny portion of the company.

The company said it plans to begin producing electrolyzers—equipment that makes hydrogen fuel—in the U.S. for the first time. The company will produce electrolyzers in Fridley, Minnesota, with an initial manufacturing capacity of 500 megawatts annually, with the capacity to scale up production to 1 gigawatt annually.

Cummins also said it will be expanding its electrolyzer manufacturing capacity at its Oevel, Belgium plant.