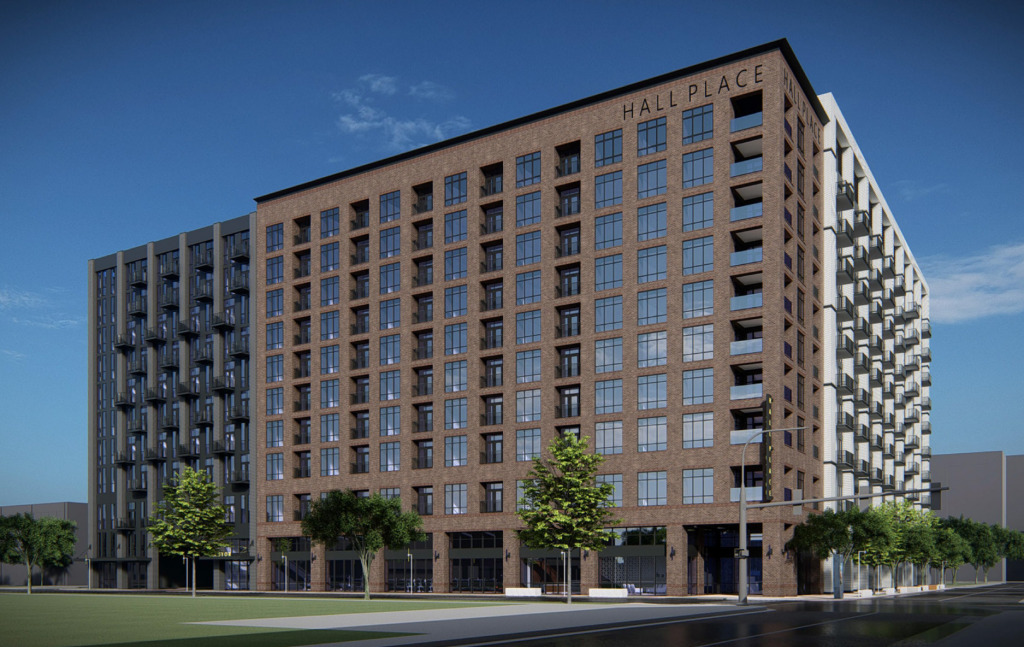 A rendering of Hall Place Apartments. (Image courtesy of the city of Indianapolis)

Arrow Street Development is seeking city approvals for the project at 1720 N. Illinois St., which would consist of 308 apartments—including some lower-income units—a parking garage and nearly 13,000 square feet of street-level retail and amenity space. It would also feature 13 for-rent townhomes.

To be named Hall Place Apartments, the project is expected to occupy about 2 acres just south of 18th Street, between Illinois Street and the minor north-south city street Hall Place immediately to the west. Its location would provide direct access to frontage along IndyGo’s Red Line.

The development would have about 8,300 square feet of space dedicated to retail across several storefronts, with another 4,600 square feet set aside for a lobby area and amenity center. The retail would be along Illinois Street, while the apartment lobby and entrance area would be on 18th Street, with covered outdoor patio area on the corner.

It will also include a three-level, above-grade parking garage, with entrance and exit points along 18th Street and Illinois Street, totaling 288 spaces—about 127 more than required by city code for projects along bus rapid-transit lines.

Rodney Byrnes, founder and principal of Arrow Street, said the retail that the project pursues will be dictated through conversations with neighborhood residents and businesses, including Indiana University Health.

IU Health is in the process of expanding the footprint of its downtown medical campus by eight blocks. A new $1.6 billion hospital is planned just south of IU Health’s century-old Methodist Hospital. The eight-block expansion will add 44 acres to the campus, extending it from 16th Street south to 12th Street and from Capitol Avenue west to Interstate 65.

The campus also will house the IU School of Medicine, which will move from its current location on the IUPUI campus.

The Hall Place development will include 63 studio units, 155 one-bedrooms and 79 two-bedrooms, along with 13 townhouses situated along Hall Place. Rent rates for the units have not yet been finalized, but they are expected to be in line with market conditions.

At least 33—or 11%—of the apartment units will be offered as workforce housing, for individuals and families making anywhere from 50% to 80% of the area’s median income. That is a prerequisite for multifamily projects to receive city incentives.

Byrnes said Arrow Street has “had a number of conversations with the city about how we can partner together” on the project and others the firm has nearby.

“Frankly a lot of the residents will be health care workers and hospital employees. The anchor institution that they work for is what attracted us for this site from the very beginning,” he said. “With their new construction, that’s only increased our interest.”

Hall Place is the second phase of Arrow Street’s plans for the area near IU Health’s  consolidated downtown campus. The first project, a 244-unit property known as Wesley Place, is now under construction directly across Illinois Street from the proposed development.

Arrow Street has a minority partner in its redevelopment efforts, through Los Angeles-based Standard Real Estate Investments. The firm specializes in providing capital to minority and women-owned development firms for multifamily projects. Chatham Park Development—where Byrnes is also a senior adviser—is involved in the project, as well.

Together, the Wesley Place and Hall Place projects represent a $125 million total investment by Arrow Street and its partners, consisting of about 565 total multifamily units and a potential swell of shared amenities between them.

“We began thinking about our current project and infrastructure at Wesley Place four or five years ago, so we’ve been invested in the neighborhood and thinking about what’s next for a while,” Byrnes said. “We believe in the hospital and we believe in the Red Line. We think this kind of [development] scale is impactful, and is going to really change the trajectory of the private investment in and around the health district.”

The developer said while Wesley Place and Hall Place will each offer different amenities, he hopes they’ll “feed off each other” as they are shared between residents.

Hall Place is expected to have a pool as part of a fourth-floor open-air courtyard within the walls of the massed structure. A pocket park is also planned for a small portion on the southwest corner of the property.

Byrnes said he believes his firm’s project are likely to contribute to one of the largest neighborhood redevelopments in the history of Indianapolis, citing IU Health’s investments. He said he’s continuing to look for additional parcels he could develop with multifamily or mixed-use space.

The Hall Place project is set to go before the city of Indianapolis Metropolitan Development Commission’s Regional Center Hearing Examiner on Thursday for approvals tied to the demolition of the existing nondescript medical office building on the property, along with items tied to construction of the new development.

Arrow Street is also asking for the land to be rezoned to allow for the mixed-use project and for a 15-foot alleyway that bisects the property to be vacated.

The firm has the land under contract from Indiana Health Inc., a holding company for IU Health, pending city approvals for the project.

Byrnes said he hopes to deliver Wesley Place by mid-2023 and Hall Place by the end of 2024.

CSO Architects is the design firm on both of the projects.