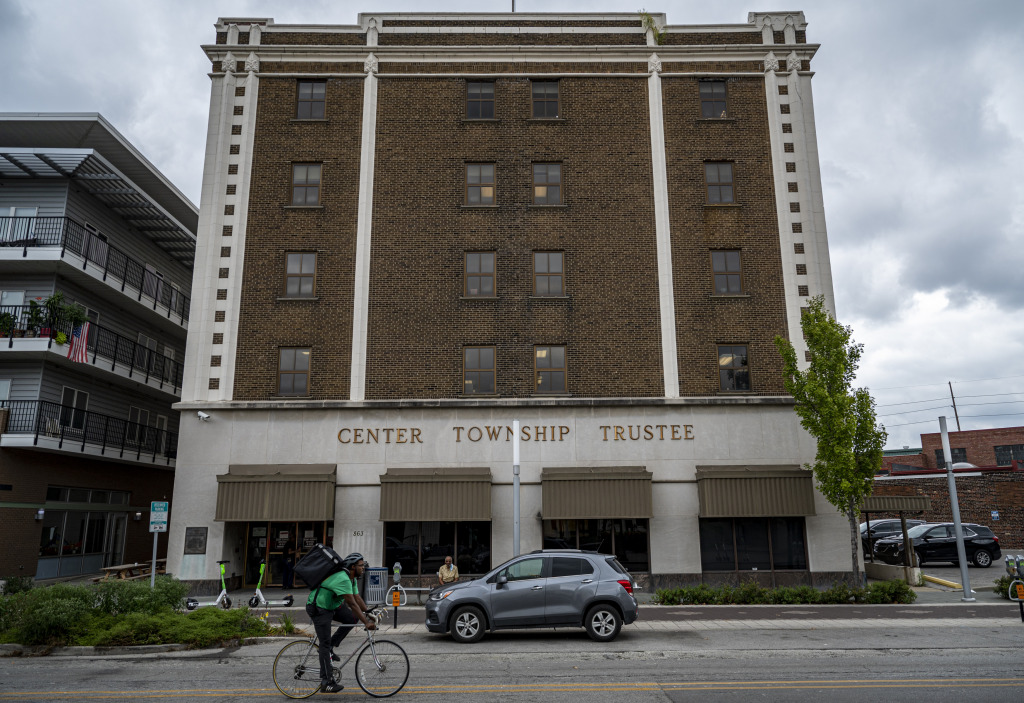 The new owner of the former Center Township Trustee building on Massachusetts Avenue plans to spend $12.5 million to revamp the property with a new restaurant and improved office space.

Plans from Indianapolis-based Landmark Properties Inc. include a rooftop deck space and a refreshed front facade for the building at 863 Massachusetts Ave., directly across from the Bottleworks District. The first floor and basement would be used for a restaurant tenant, while floors two through five would be reserved for office users.

The 40,000-square-foot structure sits on 1-1/3 acres and was constructed in 1917 as home to Hogan-Schroeder Storage Co. and a bank. It became the township headquarters in 1975.

Landmark formally acquired the building for $4.6 million in April and has already started demolition work inside the structure.

Brian Pahud, president of Landmark, told IBJ the firm has received extensive interest in the office space for the building. The company is working with the Indianapolis office of Chicago-based brokerage JLL to market the property.

“We’re enthusiastic with where it sits right now, as far as interest in the building—it’s been surprisingly robust,” he said. “We’ve had a number of users that we’ve talked to that seem to be credible.”

The refresh of the property would be split into two phases. The first would focus on the restaurant and office space (including the deck), while the second would hone in on amenities, including a possible conversion of an adjacent parking lot into an outdoor gathering space.

The awnings that line the western facade of the building, along Massachusetts Avenue, will be removed and replaced with taller windows. The front of the structure will get a new cast stone base and a thorough cleaning to return the original look. The company plans to add about 32 windows to the building’s southwestern and northeastern facades as part of the project.

The Indianapolis Historic Preservation Commission earlier this year approved several other changes to the project. Those include the demolition of a previous addition to the building, along with an alteration to the first-floor storefront space and the extension of an existing elevator shaft.

Landmark has applied for a 10-year tax abatement for the project, which would save it about $654,000 in exchange for creating about 40 permanent jobs at an average wage of $25 per hour by the end of 2024. The building is not currently on city tax rolls, as it has been owned and occupied by the township trustee for nearly 50 years.

The current assessed value of the property is about $4.1 million and would be about $6.8 million following the redevelopment. Landmark would save about 32% on taxes over the life of the incentive, paying an estimated $1.375 million through 10 years. It would owe about $202,745 per year in taxes once the abatement period ended.

The company plans to contribute about 5% of its savings—roughly $32,654—to the Indianapolis Housing to Recovery Fund, which is meant to address homelessness across Marion County.

The city’s Metropolitan Development Commission on Wednesday recommended approval for the abatement. A confirmatory hearing by the board is expected in the coming months, after the matter is taken up by City-County Council.

The property is adjacent to the redevelopment of Jungclaus Mill, which also promises to bring new office space to the downtown submarket.

Indianapolis firm Ratio Design is the architect on the renovation, which is expected to be completed by late 2023.