Home » Dora submits plans for Tru by Hilton hotel along U.S. 31 in Carmel 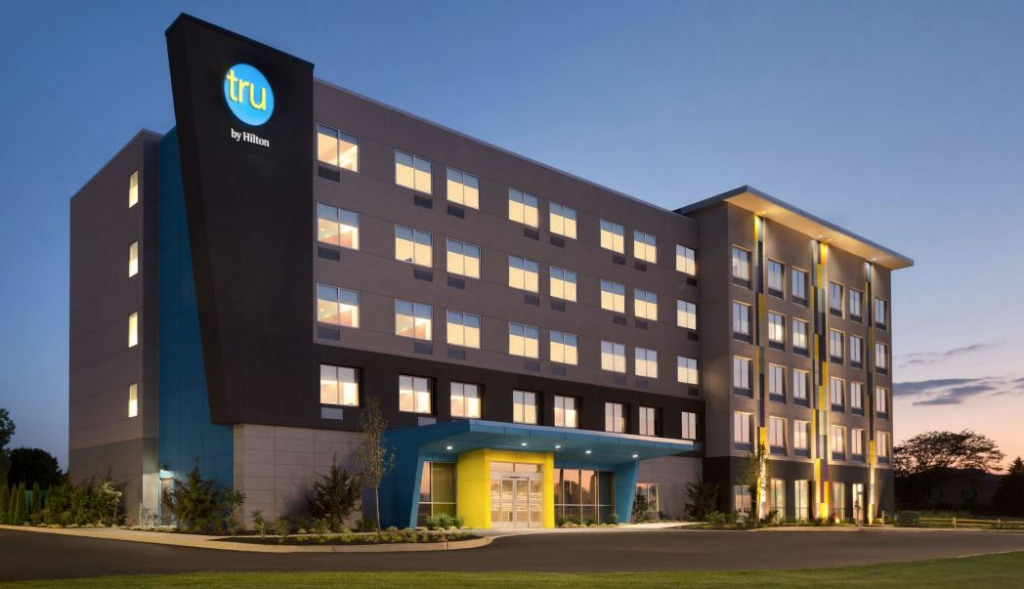 Hilton introduced its affordable Tru line of hotels in 2016. Hotels are currently open in Indianapolis and Lawrence with another planned in Carmel. (Rendering courtesy Hilton)

Dora Hospitality Group is working to develop a Tru by Hilton hotel along the U.S. 31 corridor in Carmel, according to documents filed with the city.

The location is directly north of the Ritz Charles hospitality venue at 12156 N. Meridian St., between Illinois Street and North Frontage Road on the west side of U.S. 31.

Vince Dora, president of Dora Hospitality Group, told IBJ that plans for the hotel remain in the approval process, but he does not anticipate any issues in moving forward with construction.

He hopes to break ground on the approximately 75,000-square-foot hotel next summer and open in the fall of 2024.

Plans for the hotel will be discussed Dec. 21 at the Carmel Technical Advisory Committee meeting. The project is also scheduled to be on the Carmel Plan Commission’s agenda on Jan. 17, 2023, according to city documents.

Dora Hospitality Group and Carmel-based developer Lauth Group previously partnered in 2018 with a plan to redevelop the four-acre site with a Tru by Hilton hotel, a three-story office building and a parking garage.

Those plans later fell through, but Indianapolis-based Cornerstone Cos. Inc. constructed the three-story, 40,000-square-foot Carmel Medical Arts Pavilion that is open and operational on the site at 12174 N. Meridian St.

Dora said the hotel developers no longer have plans for a parking garage.

In 2018, Dora Hospitality Group received a development standards variance from Carmel’s Board of Zoning Appeals to scrap conference space required by the site’s zoning district from their plans.

Hotels built along the corridor typically are required to be full-service hotels and include 40 square feet of conference space for every guest room.

Hilton introduced the affordable Tru brand in 2016 to compete against Comfort Inn and La Quinta.

Hilton operates six Tru hotels in Indiana, including at 601 Russell Ave. in Indianapolis near Lucas Oil Stadium and at 5660 Lawrence Village Parkway in Lawrence. The other four Tru by Hilton hotels are in northern Indiana, in Auburn, Elkhart, Fort Wayne and Warsaw.

Dora Hospitality Group, a third-generation family business that dates to 1958, manages or owns 20 hotels under multiple brands in Indiana, Illinois, Montana and North Dakota, including 13 in the Indianapolis area.

The company has five more hotels that are scheduled to open in 2023 or 2024. They include the Tru by Hilton and a Tempo by Hilton in Carmel, a Residence Inn by Marriott and an Avid hotel in Indianapolis, and a Hotel Indigo in Louisville.

One thought on “Dora submits plans for Tru by Hilton hotel along U.S. 31 in Carmel”