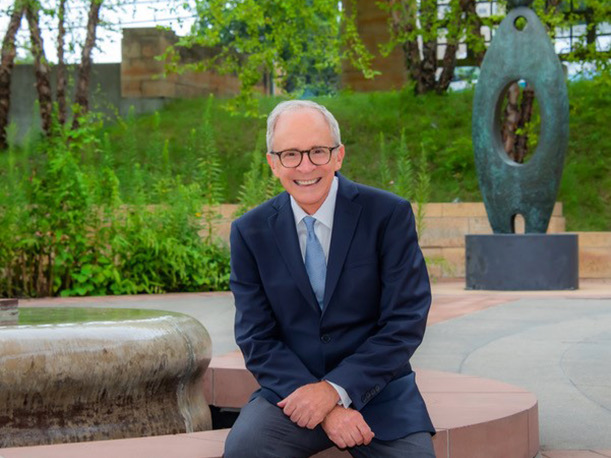 John Vanausdall was hired as president of the Eiteljorg Museum of American Indians and Western Art in October 1996. (Photo provided by Casey Cronin)

Long-running Indianapolis museum executive John Vanausdall, who’s served as president of the Eiteljorg Museum of American Indians and Western Art since 1996 and previously worked for 18 years at the Children’s Museum of Indianapolis, announced on Thursday his retirement plans.

Indiana University alum Vanausdall will retire from his role as Eiteljorg president and CEO on June 30, 2023, and assist in the transition to a successor selected by the museum’s board of directors through a search process with Bridge Partners, LLC.

The search committee plans to announce Vanausdall’s successor during the first quarter of 2023.

“I am tremendously proud of all the staff, board and community have accomplished together to help the Eiteljorg maximize its impact locally, regionally and nationally,” Vanausdall said in a written statement.

Among facility upgrades during Vanausdall’s tenure are newly redesigned Native American Galleries that opened in June on the second floor of the building that opened in 1989 as part of White River State Park. The $6 million renovation phased out displays arranged by geographic region and instead focuses on three themes: relation, continuation and innovation.

Funding for the project came from the $55 million Project 2021 capital and endowment campaign, which raised $40 million in cash and pledges for the museum’s endowment. The museum also renovated its children’s area and the Nina Mason Pulliam Education Center.

Before Project 2021, the Eiteljorg’s operating endowment was valued at $20 million.

The value at the end of 2021 reached $40 million, thanks to Project 2021 and gains in the market. A museum spokesperson said nearly $30 million has been pledged in future giving for the endowment.

Vanausdall oversees signature Eiteljorg initiatives such as a biennial contemporary art fellowship, the annual Indian Market and Festival and the annual Quest for the West Art Show and Sale.

“John Vanausdall is a visionary leader whose impact on Indianapolis arts and culture cannot be overstated,” Goodman said in a written statement. “His commitment to inclusion, access, equity, and community partnerships throughout his 26-year tenure have made the Eiteljorg Museum the dynamic cultural center it is today—not only in Indianapolis, but nationally. He leaves big shoes to fill, but in true John fashion, he will—without question—set the organization up for a successful transition.”

“Under John Vanausdall’s leadership, the Eiteljorg Museum of American Indians and Western Art has grown into a world-renowned institution celebrating and preserving the arts and cultures of Native peoples,” Oakman said in a written statement. “John’s 26 years of leadership at the Eiteljorg have helped make White River State Park the destination it is today and we’re fortunate to have such a wonderful cultural institution on our campus.”

Vanausdall, 66, served as vice president and director of research and planning during his tenure at the Children’s Museum.

“For my part, I am looking forward to spending time in retirement with family and friends, traveling and finding new ways to be of service to others,” Vanausdall said. “I am tremendously excited for the future of the Eiteljorg Museum and the opportunities awaiting it.”

Vanausdall’s announcement arrives during a year in which Indianapolis cultural organizations recently filled one leadership role and have one new vacancy.

Colette Pierce Burnette started her tenure as president and CEO of Newfields on Aug. 1. On July 6, the American Pianists Association’s board of directors accepted the resignation of Peter Mraz after he had served as the APA’s president and CEO for 11 months.