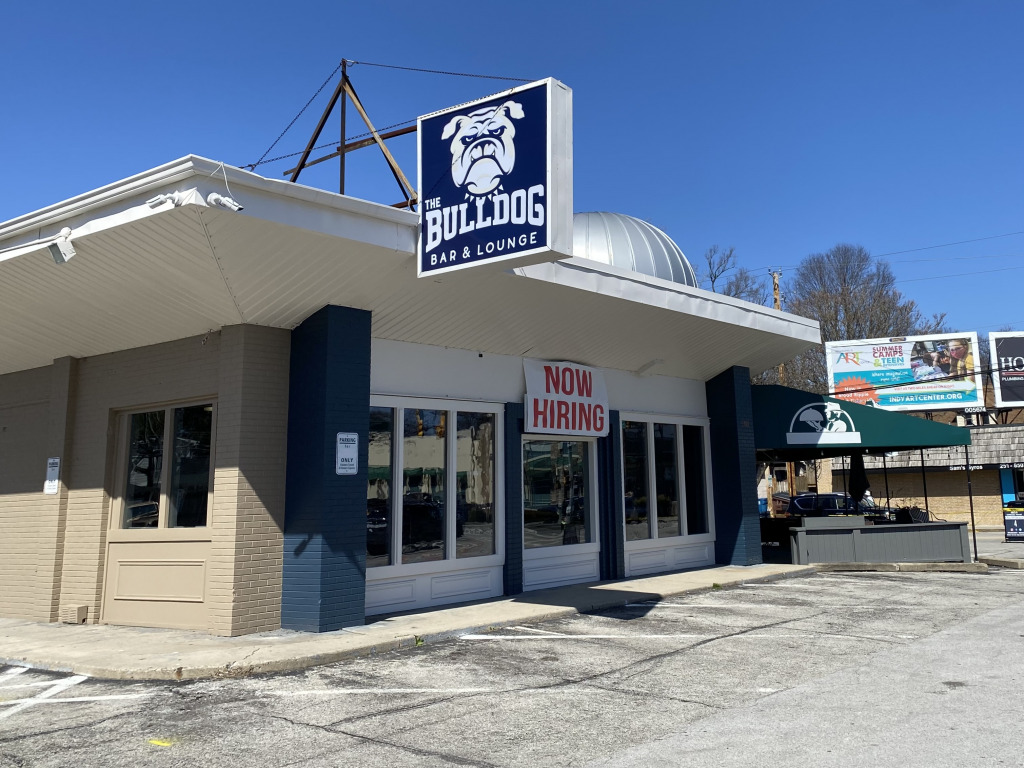 The new Bulldog Bar & Lounge is expected to open in May. (IBJ photo/Dave Lindquist)

The Bulldog is returning to Meridian-Kessler in the same building where crowds gathered for drinks and socializing from 1974 to 1994.

Property owner John Bales is set to revive the Bulldog name at 5380 N. College Ave., where Moe & Johnny’s operated for 26 years after replacing the Bulldog.

Bales, who has been the site’s landlord for more than a decade, owns the Bulldog Bar & Lounge business with partners Brian Knoderer and Caroline Smith. The trio said they hope to open the bar in May.

While a Bulldog comeback will generate nostalgic feelings among former patrons, a new concept is present in the form of self-serve beer taps.

In addition to traditional bar service, the Bulldog will feature two walls dedicated to 48 self-pour taps. In a concept that debuted locally at the bygone Rebar Indy, 20 N. Delaware St., the “beer wall” system allows guests to load money on a card or wristband.

At the tap, customers can fill their glasses with as many ounces as they want. Smith notes that “an integrated algorithm makes sure people can’t overserve themselves.”

During an era when hospitality workers are scarce, Bales described the self-pour concept as “the future of the industry.”

“You don’t have to wait for service,” Knoderer said. “If you need a drink, go get a drink.”

Bales and Knoderer met while attending Ball State University. In 1990, Knoderer earned a master’s degree in business from Butler University—the school with the mascot that inspired the Bulldog’s name.

“This is the Bulldog grown up,” Smith said. “I think a lot of people who came here when they were in college have grown with the neighborhood. We want this to be a place where they can bring their families. We also want to honor the legacy of the Bulldog and have today’s Butler students make this their home bar.”

Marcus Bethea will serve as the Bulldog’s general manager. Chef Tory Walker is devising a menu that includes Sunday brunch at BD Social.

Mack and Kinney filed legal claims against each other based on a disagreement about the terms of their transaction. The dispute was resolved out of court in 2021.