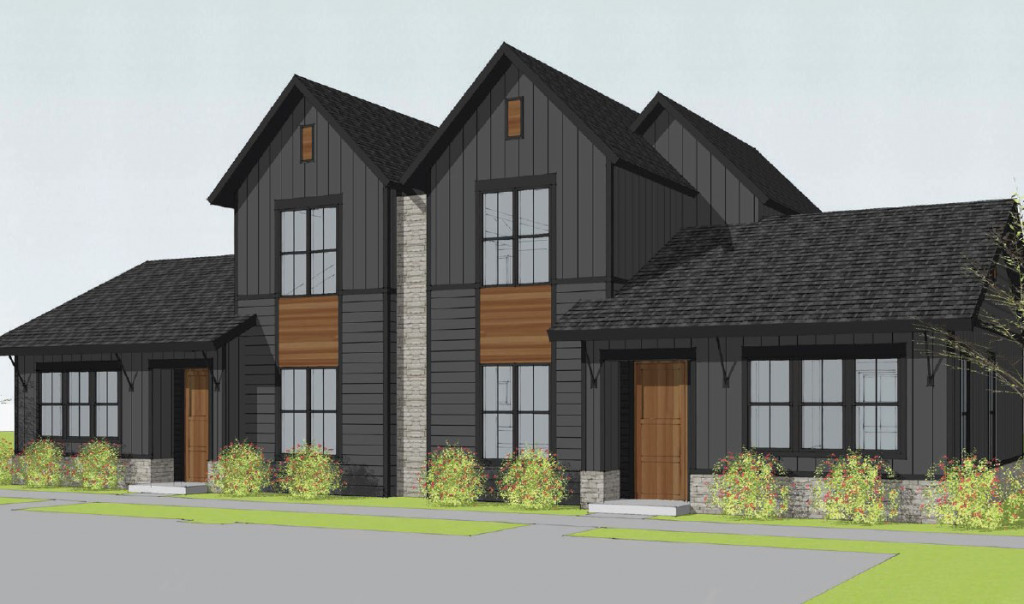 A conceptual rendering of the three-bedroom villas planned for Slate at Fishers District. (Rendering courtesy of Thompson Thrift Residential)

The Indianapolis-based firm behind the ritzy Fishers District complex on East 116th Street plans to kick off construction Monday on a 242-unit community of homes for rent just south of the high-end retail-and-apartments development.

IBJ reported in February that developer Thompson Thrift planned to build a $63 million, 250-unit neighborhood on the 25.5-acre site, to be called The Villas at Fishers District. It required approval from the Fishers City Council to rezone the land from Employment Node, which allows for office development, to a planned unit development.

The council approved the rezoning in April in a 6-2 vote. Thompson Thrift Residential, an affiliate of Thompson Thrift, has renamed the project Slate at Fishers District and expects construction to wrap up in early 2023.

Slate will consist of one-, two- and three-bedroom villas, along with three- and four-bedroom townhomes, all designed in a modern farmhouse style, according to the developer. The residences will average 1,215 square feet and feature premium amenities such as quartz countertops, stainless steel appliances, 10-foot ceilings and walk-in closets with custom wood shelving.

As part of the project, a public park including a paved trail will be constructed, providing Slate residents with direct pedestrian and bike access to Fishers District.

“We continue to see demand from renters that want the maintenance-free benefits and amenities of traditional apartments with the space and comforts of single-family homes,” said Eric Wojak, Thompson Thrift Residential vice president of development, luxury leased homes.

“With its location in the highly rated Hamilton Southeastern School District and its proximity to excellent employment, and the retail and dining options at Fishers District, we expect leasing interest at the Slate development to be robust,” Wojak said in a media release.

Slate will be directly east of the Ikea that opened in 2017. Announced in 2015, plans for the Swedish furniture store sparked a development spree on East 116th Street, east of Interstate 69, that included Fishers District, Portillo’s and Top Golf.

A representative of Thompson Thrift did not respond to questions from IBJ on whether the projected $63 million price tag for the Slate had changed since early 2021.