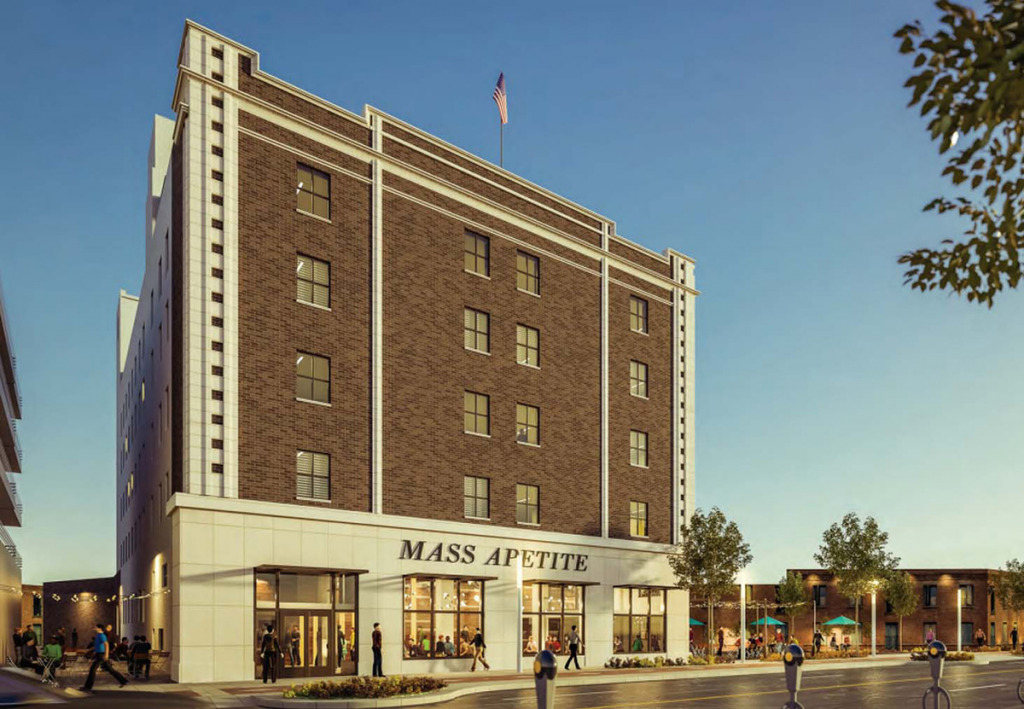 Landmark Properties hopes to land a restaurant tenant on the first floor of 863 Massachusetts Ave. (Image courtesy of the city of Indianapolis)

The developer that last year acquired the Center Township Trustee building on Massachusetts Avenue across from the Bottleworks District is moving ahead with plans to improve the building’s facade and interior.

Indianapolis-based Landmark Properties hopes to add a restaurant tenant on the first floor of the five-story property at 863 Massachusetts Ave., and is working with the local office of brokerage JLL to market the rest of the building as office space.

According to plans approved by the Indianapolis Historic Preservation Commission this month, Landmark intends to make several changes to the property.

The modifications include the demolition of an addition to the building, along with the removal of several canopies, the alteration of a storefront space, the creation of new openings on multiple sides of the property and the extension of an elevator shaft.

The moves are intended to attract a restaurant operator to the first floor of the building, while also updating existing office space that has grown stale over the years, said J. Murray Clark, an attorney who represents Landmark.

The project is expected to be split into two phases, with a focus on the restaurant and office space in the first and a focus on amenities—including a possible redesign of a small parking lot into an outdoor area—in the second.

The awnings that line the northwest facade of the building, along Massachusetts Avenue, are expected to be removed as part of a process that will also include the installation of new, taller windows. The facade is also expected to get a new cast stone base and a thorough cleaning to return the original look of the stone.

“With the renovations, the building office component will be designed and delivered to the market as creative office, building upon the historic character of the structure and all of the other great things going on along Mass Avenue including Bottleworks and other recent developments,” he said.

Clark, an attorney at Faegre Drinker, declined to share a development cost. He said a full timeline is also still being finalized, although Landmark hopes to begin work on the first phase within 60 to 90 days.

The property is directly across from the $300 million Bottleworks mixed-use development and adjacent to the redevelopment of Jungclaus Mill, which also promises to bring new office space to the downtown submarket.

Landmark’s 35,000-square-foot structure sits on 1-1/3 acres and was constructed in 1917. It was previously home to the Hogan-Schroeder Storage Co. and a bank before becoming the township headquarters in 1975.

The structure has been under contract since October, after the trustee’s office quietly began entertaining offers to buy it in August. A purchase price for the building has not yet been made public, but the trustee was asking for $4 million.

Indianapolis firm Ratio Design is the architect on the project.