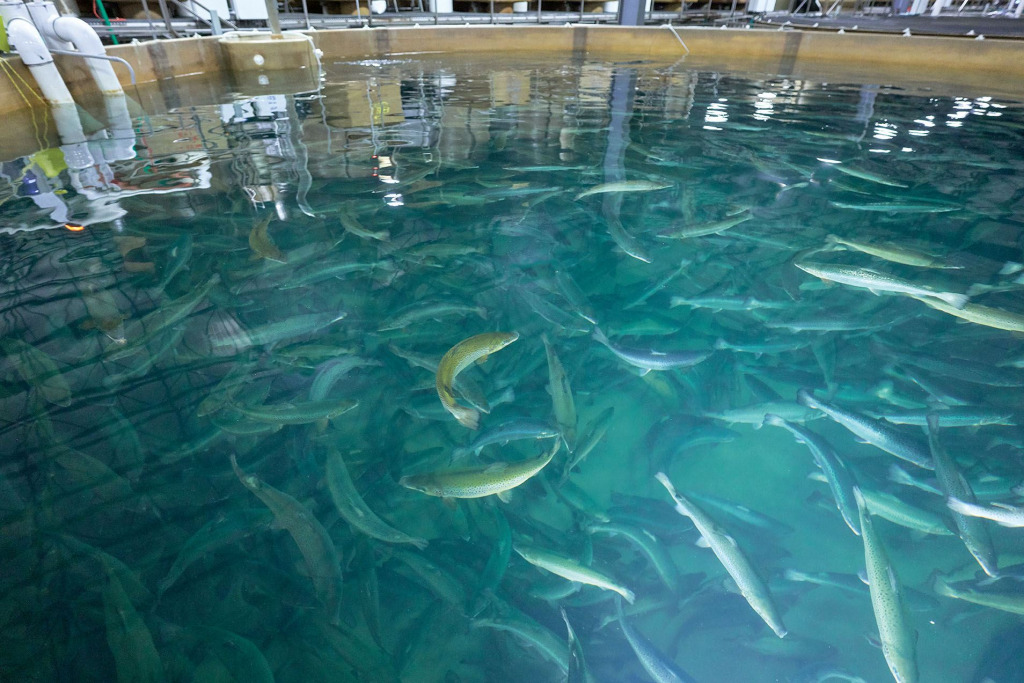 The inaugural harvest of genetically modified salmon began this week, a little later than expected after the pandemic delayed the sale of the first such altered animal to be cleared for human consumption in the United States, company officials said.

Several tons of salmon, engineered by biotech company AquaBounty Technologies Inc. and raised in Indiana, will now head to restaurants and dining services—where labeling as genetically engineered is not required—in the Midwest and along the East Coast, company CEO Sylvia Wulf said.

Thus far, the only customer to announce it is selling the salmon is Samuels and Son Seafood, a Philadelphia-based seafood distributor.

AquaBounty has raised its faster-growing salmon at an indoor aquaculture farm in Albany, a town of about 2,100 residents roughly 11 miles northeast of Muncie. The fish are genetically modified to grow twice as fast as wild salmon, reaching market size—8 to 12 pounds—in 18 months rather than 36.

The company originally planned to harvest the fish in late 2020. Wulf attributed delays to reduced demand and market price for Atlantic salmon spurred by the pandemic.

“The impact of COVID caused us to rethink our initial timeline … no one was looking for more salmon then,” she said. “We’re very excited about it now. We’ve timed the harvest with the recovery of the economy, and we know that demand is going to continue to increase.”

Although finally making its way to dinner plates, the genetically modified fish has been met by pushback from environmental advocates for years.

The international food service company Aramark in January announced its commitment to not sell such salmon, citing environmental concerns and potential impacts on Indigenous communities that harvest wild salmon.

The announcement followed similar ones by other major food service companies—Compass Group and Sodexo—and many large U.S. grocery retailers, seafood companies and restaurants. Costco, Kroger, Walmart and Whole Foods maintain that they don’t sell genetically modified or cloned salmon and would need to label them as such.

The boycott against AquaBounty salmon has largely come from activists with the Block Corporate Salmon campaign, which aims to protect wild salmon and preserve Indigenous rights to practice sustainable fishing.

“Genetically engineered salmon is a huge threat to any vision of a healthy food system. People need ways to connect with the food they’re eating, so they know where it’s coming from,” said Jon Russell, a member of the campaign and a food justice organizer with Northwest Atlantic Marine Alliance. “These fish are so new—and there’s such a loud group of people who oppose it. That’s a huge red flag to consumers.”

Wulf said she’s confident there’s an appetite for the fish.

“Most of the salmon in this country is imported, and during the pandemic, we couldn’t get products into the market,” Wulf said. “So, having a domestic source of supply that isn’t seasonal like wild salmon and that is produced in a highly-controlled, bio-secure environment is increasingly important to consumers.”

Massachusetts-based AquaBounty markets the salmon as disease- and antibiotic-free, saying its product comes with a reduced carbon footprint and none of the risk of polluting marine ecosystems like traditional sea-cage farming carries.

In 2018, the federal agency greenlit AquaBounty’s sprawling Indiana facility, which is currently raising roughly 450 tons of salmon from eggs imported from Canada but is capable of raising more than twice that amount.

But in a shifting domestic market that increasingly values origin, health and sustainability, and wild over farmed seafood, others have a different view of the salmon, which some critics have nicknamed “Frankenfish.”

Part of the domestic pushback revolves around how the engineered fish is to be labeled under FDA guidelines. Salmon fishermen, fish farmers, wholesalers and other stakeholders want clear labeling practices to ensure that customers know they’re purchasing an engineered product.

USDA labeling law directs companies to disclose genetically-modified ingredients in food through use of a QR code, an on-package display of text or a designated symbol. Mandatory compliance with that regulation takes full effect in January, but the rules don’t apply to restaurants or food services.

Wulf said the company is committed to using “genetically engineered” labeling when its fish are sold in grocery stores in coming months.

In November, U.S. District Judge Vince Chhabria in San Francisco affirmed that the FDA had the authority to oversee genetically engineered animals and fish. But he ruled that the agency hadn’t adequately assessed the environmental consequences of AquaBounty salmon escaping into the wild.

The company argued that escape is unlikely, saying the fish are monitored 24 hours a day and contained in tanks with screens, grates, netting, pumps and chemical disinfection to prevent escape. The company’s salmon are also female and sterile, preventing them from mating.

“Our fish are actually designed to thrive in the land-based environment. That’s part of what makes them unique,” Wulf said. “And we’re proud of the fact that genetically engineered allows us to bring more of a healthy nutritious product to market in a safe, secure and sustainable way.”