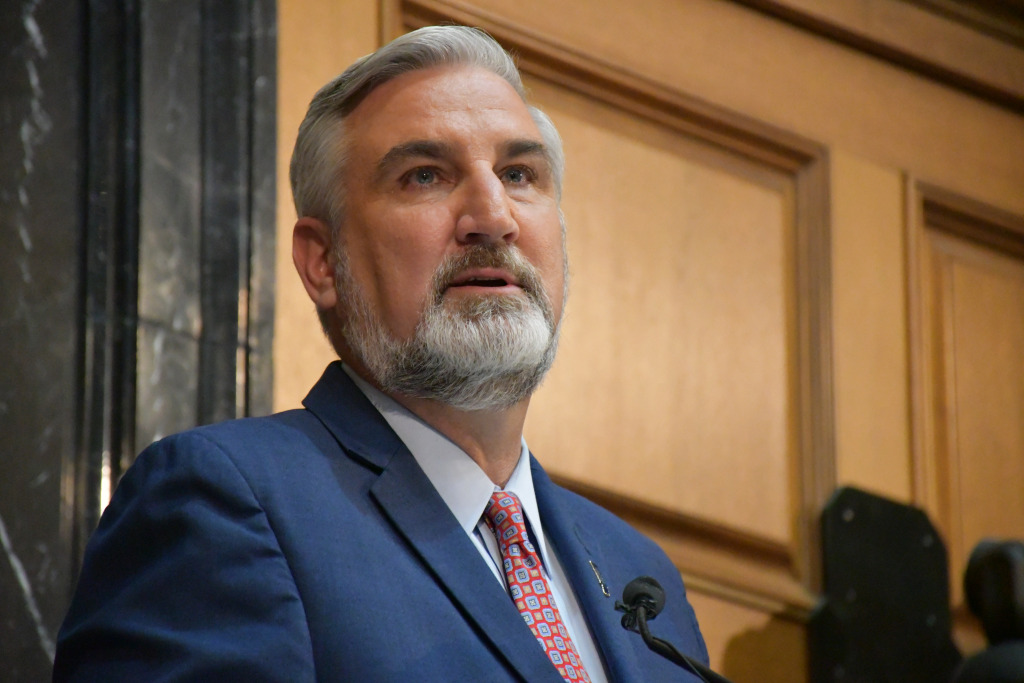 In his seventh State of the State address, Gov. Eric Holcomb laid out his agenda for his final two years in office, calling for record investments in public health, education and economic and workforce development amid fears of an economic downturn in the coming months.

The governor also beat the drum on the state’s strong fiscal position, a record-breaking year of $22 billion in capital investment and a business climate that is consistently ranked as one of the best in the nation.

“I know I’m a broken record on these broken records, but it bears repeating,” Holcomb told a  joint session of the Indiana House and Senate on Tuesday night.

The governor stressed that further investments were needed in K-12 schools and higher education, workforce training and public health if Indiana expects to meet the talent demands of high-wage employers.

His speech did not stray from the message he’s been delivering for the past several weeks, but the governor’s priorities differ from Senate Republicans, which did not include increased funding for education among their top agenda items announced on Monday.

Holcomb also wants to get rid of textbook and curricular material fees for families, which would remove Indiana from the list of seven states that currently charge students for textbooks. The plan would cost the state around $160 million per year, a significant increase from the $39 million currently allocated to schools to purchase those materials.

To illustrate his point, he pointed to Mandy Allen, a school counselor and parent in the South Vermillion School Corp. who spent $630 this year on books for her four children, he said.

“Our state constitution promises a tuition-free education,” he said. “Let’s cover the full cost of curriculum fees paid for by parents like Mandy, so that–starting next school year–no parent receives such a dreadful bill again.”

Senate Republican leaders  haven’t said whether they would support the the governor’s full funding increase for K-12 schools, but House Speaker Todd Huston said fellow Republicans in the House likely would propose funding levels similar to the governor’s.

Also unclear is whether his party is on board with a proposal to increase public health funding by $120 million in the next fiscal year to $243 million in 2025, near the amount recommended by the governor’s public health commission in a widely circulated August report that serves as the road map for Holcomb’s public health agenda.

Holcomb’s agenda also calls for funding to bolster the Indiana Economic Development Corp., including the creation of an annual $300 million “deal-closing fund,” a one-time injection of $150 million for a revolving fund to purchase land and another $300 million per year tax credit gap aimed at attracting new businesses to Indiana.

It’s part of an ongoing strategy to formalize the economic development tools that lawmakers have authorized to the Indiana Economic Development Corp., he said.

“In case anyone is wondering why I travel overseas occasionally, an unprecedented $7.2 billion of the $22 billion [in business investment] comes from all over the world,” Holcomb said, addressing critics who question the utility of his international delegations. “Rest assured that I bring suits and ties, not shorts and sunscreens.”

Last year, Holcomb led economic development trips to Taiwan, South Korea, Germany and Switzerland, the costs of which are covered by private donations to the Indiana Economic Development Corp. In November, he participated in the United Nations COP27 Climate Summit in Egypt, where he touted Indiana’s green energy investments and business-friendly tax environment.

Holcomb is also calling for $500 million for a second round of funding of the Regional Economic Acceleration and Development Initiative, a program administered by the IEDC that supports local economic development projects.

He is also proposing a $1 billion payment to the Pre-1996 Teachers’ Pension Fund, a measure both the House and Senate are expected to support.

As promised, the governor also broke some news, announcing that the state would acquire the abandoned Monon South rail corridor and transform it into the largest multi-use trail in the state. Once completed, the route will be 62.3 miles long, stretching from Mitchell to New Albany on the Ohio River.

The Department of Natural Resources will award $29.5 million to acquire and begin development of the trail, which will span five counties in southern Indiana. An additional $24 million will be spent to begin design, engineering and construction of portions of the trail.

Senate President Pro Tem Rod Bray, R-Martinsville, said the GOP majority in the Senate generally shares several of the governor’s priorities, including increased funding for public and mental health, increasing starting pay for Indiana State Police to $70,000 per year and paying down the teachers’ pension fund.

However, he declined to say whether he supported the governor’s proposal to nix K-12 textbook fees or the full funding amounts requested for public health and K-12 funding.

“Obviously, K-12 public education is super important,” Bray told reporters following the speech. “As we all know, it’s the largest line item in the budget and will continue to be. Whether or not we get to that with the textbooks, that’s something we’ll talk about within our caucus.”

Huston, the House speaker, said he expects his chamber’s budget for K-12 funding to be similar to the governor’s proposal.

Both GOP legislative leaders were generally supportive of the governor’s recommended funding increases for the IEDC to support continued economic development initiatives, including the planned innovation district in Boone County and the $500 million recommendation for the READI program.

Huston rebuffed a suggestion that the quasi public-private agency needed more oversight, as some Democrat lawmakers have suggested.

“These are very sensitive negotiations,” Huston said. “Up until the deal gets closed, it’s important those deals are kept close to the vest because most of the time you’ve got multiple entities competing.”

Senate Minority Leader Greg Taylor, D-Indianapolis, said he supports many of the governor’s priorities but wonders if Holcomb’s Republican colleagues will fall in line.

“I support a lot of things that are in his budget, but I think he has a long way to go to get my colleagues on the other side of the aisle to support him,” Taylor said.

House Minority Leader Phil GiaQuinta, D-Fort Wayne, said the governor is taking up initiatives that have been championed by Democrats for years.

“I’m pleased to see the state’s top executive adopt long-held policy solutions proposed by our caucus, including increased funding for education and health care,” he said. “The Democrats’ playbook must be a winning one.”