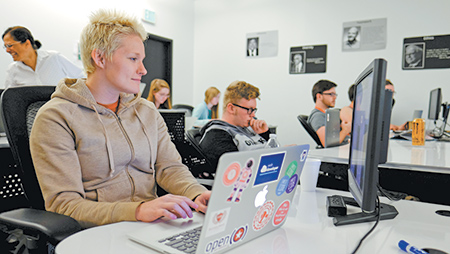 Indiana Wesleyan University has acquired the assets of financially troubled Indianapolis-based coding school Eleven Fifty Academy and will continue to operate it as a not-for-profit organization, the university announced Friday after closing on the deal.

IWU said it will shepherd existing Eleven Fifty students through their online programs and hopes to begin new cohorts of classes early next year.

“We’re working on a new course schedule right now,” said Eileen Hulme, chancellor of IWU’s online programs. “We are thinking the end of January, the first part of February, we’ll start offering new courses under the new entity. So it will be a pretty fast turnaround.”

IWU had confirmed its interest in Eleven Fifty last week, and this week it shared more details of the transaction.

IWU said it’s not certain yet whether it will change the coding school’s name. It might keep the Eleven Fifty name at least for a while because of its name recognition.

Eleven Fifty, cofounded in 2014 by tech entrepreneur Scott Jones, offers boot-camp-style coding and cybersecurity instruction, with the goal of launching students into tech careers without the need to earn a college degree.

The school, which Jones said has graduated more than 1,800 students to date, has fallen into financial distress in recent months. It has suspended new enrollments, though 65 current students are still receiving instruction and are set to graduate in March. The school is also facing wage claims from more than 10 former employees who said they had started missing paychecks as early as Aug. 1.

On Friday, IWU purchased Eleven Fifty’s curriculum, trademarks, trade names, domain names and social media accounts. The school declined to say how much it is paying for the assets. Proceeds from the sale will go to Fishers-based First Internet Bank, Eleven Fifty’s lead secured creditor, to partially satisfy the debt that Eleven Fifty owes the bank.

Jones will not be part of the coding school going forward, IWU said.

Reached via text message, Jones declined to say how much outstanding debt Eleven Fifty Academy Inc. has, or whether he had a plan for repaying what the organization owes to First Internet and other creditors.

Instead, Jones pointed to the academy’s track record, writing in part, “We proved at scale that Eleven Fifty is 16 times faster than getting a college degree in tech, at a 10th of the cost.”

IWU, a private university affiliated with The Wesleyan Church, has about 2,500 students and 600 seminarians at its main campus in Marion. The school also offers online instruction to some 8,500 students, and it offers adult and graduate programs at 11 regional education centers in Indiana, Ohio and Kentucky. In Indiana, those sites are in Indianapolis, Greenwood, Marion, Kokomo, Fort Wayne and Merrillville. The Ohio sites are in Cincinnati, Cleveland and Dayton; and the Kentucky sites are in Florence and Louisville.

Jones has told IBJ that one of Eleven Fifty’s continuing struggles was that its tuition rate, which could be as high as $13,500 depending on the program, was more than the amount of financial aid students could get through state programs. The state’s Workforce Ready Grant program offers students up to $5,500 for qualified training programs. Accelerate Indiana, an income share agreement that is similar to an interest-free loan, offers students up to $7,500.

“We would like to make this as affordable and accessible as possible while still operating in the black,” Kulaga said.

Because Eleven Fifty is not an accredited college, students cannot use federal financial aid to pay for their education. That will continue to be the case, IWU said, since the new not-for-profit is a separate entity from the university.

IWU also said it has had positive conversations with public and private sources that have expressed interest in financially supporting the new not-for-profit, though it doesn’t yet have any firm commitments.

“There is a big interest in Indianapolis and Fishers and surrounding communities to see Eleven Fifty be successful,” Hulme said.