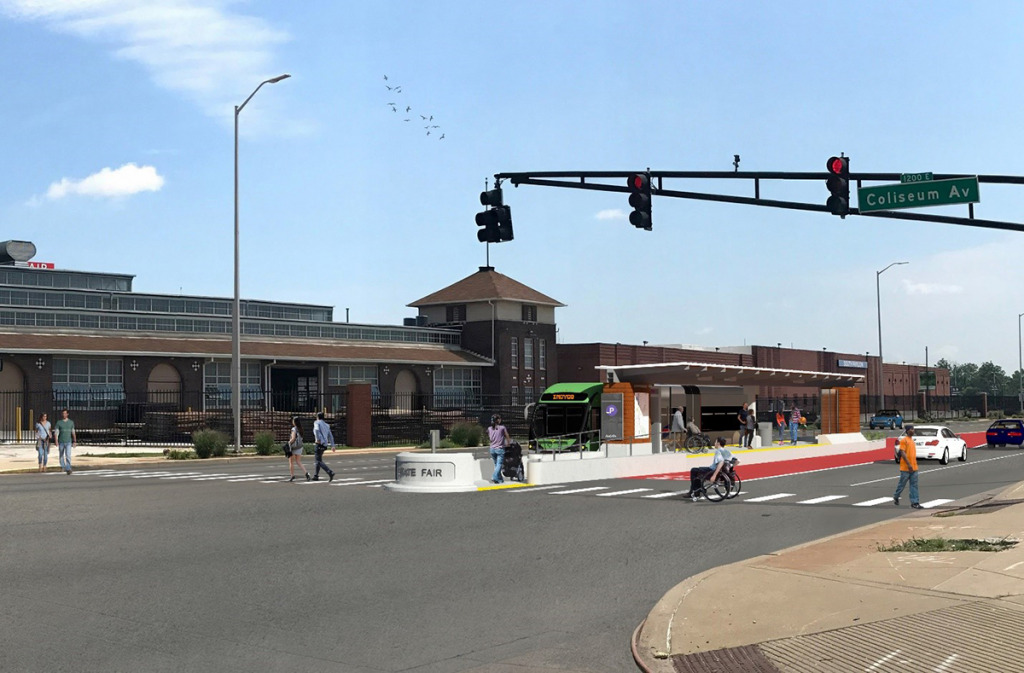 The 15.2-mile Purple Line from downtown to Lawrence, which will include a stop at the Indiana State Fairgrounds, is expected be operational in 2024. (Rendering courtesy of IndyGo)

IndyGo on Friday broke ground on the Purple Line, a two-year, $188 million bus rapid transit project set to stretch 15.2 miles from downtown Indianapolis to the city of Lawrence.

“The start of Purple Line construction symbolizes the beginning of new opportunity and growth for an entire community,” said IndyGo President and CEO Inez Evans in a news release. “We know this project will bring unprecedented renewal and phenomenal transformation as residents take advantage of the opportunity to move forward faster.”

Nearly 70% of the total is set aside for infrastructure improvements, including sidewalks and stormwater drainage. The Purple Line will use 60-foot articulated, fully-electric buses.

“The big thing about bus rapid transit, which is what our Red, Purple and Blue lines are, is that they’re much more than just transit,” IndyGo spokeswoman Carrie Black told IBJ earlier this month. “So yes, they’re moving more people faster, but they’re also significant infrastructure projects as well.”

The Purple Line will piggyback on the Red Line route between downtown and the stop at 38th Street and College Avenue. The newly constructed route from 38th and College to Lawrence will be broken into six segments, gradually moving east.

The line is scheduled to be finished and operational sometime in 2024.

The project is being funded with an $81 million U.S. Federal Transit Administration grant and $69.3 million in IndyGo-dedicated income tax—approved in a 2016 referendum—along with $33.9 million in other federal grants and $1.2 million from Indianapolis’ Department of Public Works.

Indianapolis-based F.A. Wilhelm Construction Co. is handling construction and communication after landing an $18.2 million contract for the work in December. Bloomington-based general contractor Crider & Crider Inc. will take care of the roads, sidewalks, drainage and other civil work as part of its $95.6 million contract.