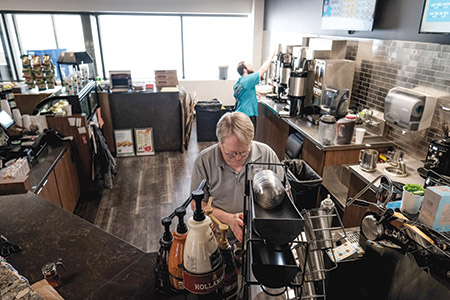 Carmel-based CC Holdings manages dozens of restaurants and coffee shops, but few are in conventional locations.

Most are in places such as Indianapolis International Airport, the Irsay Family YMCA at CityWay, Methodist Hospital, and the Eli Lilly and Co. campus.

“A lot of nontraditional locations are much more favorable for rent structure, because they really view one of our operations as an amenity, and a service for their staff and students,” said Kimberly Hendren, founder and CEO of the 27-year-old company.

“Recently, developers have come to us offering a no-rent scenario because they really want an amenity in their office building or business park.”

In an industry dominated by gigantic food service companies such as Philadelphia-based Aramark and London-based Compass Group, Hendren’s firm has created its own footprint by serving companies and institutions primarily in and around Indianapolis, Cincinnati and Louisville.

CC Holdings operates 32 locations, most of them franchised under such brands as Au Bon Pain and Nature’s Table. Nine operate under the name of its in-house brand, Coffee Zon.

It’s appropriate that CC Holdings’ own brand is Coffee Zon, because the company was born out of Hendren’s fascination with the high-end coffee scene that blossomed in Seattle in the 1960s. She got the bug while living there in the ’80s and early ’90s with her then-husband, Jon, who still works for the company as its chief development officer.

“When my first husband and I moved to Seattle right after I graduated from college, the coffee business was really booming,” she recalled.

“The idea dawned on us that we could own and operate a cart,” he said. “We just crossed our fingers and jumped in with both feet.”

Using their cars as collateral, the couple in 1992 purchased a cart and shipped it to Indianapolis, where they’d relocated.

Over Christmas that year, Kimberly, who’d trained with a Seattle company, took out a 45-day lease at Lafayette Square Mall and spent the holidays serving up cappuccinos and espressos to harried shoppers.

It was hard work, and their rent ate up a lot of their revenue.

“We were working a lot of hours and not making the money we thought we could make with a cart,” Jon said.

A few months later, they landed a location for the cart at St. Vincent Hospital on West 86th Street. It took quite a bit of cajoling of hospital administrators, because fancy coffee drinks weren’t yet a “thing” in Indianapolis.

Nor was the idea of putting a coffee cart in the lobby of a hospital or office building. Even worse, the Hendrens wanted to be viewed not as a conventional tenant, but as an amenity that added value to the building, and therefore deserved a break on rent.

“We were swimming upstream,” Jon said. “In the beginning, they tolerated us. Now they see us as a calling card.”

The company later ditched some of its carts in favor of storefront operations, signing on with national franchisors that also offered food service.

While CC Holdings’ business model has its advantages (low rents, a more-or-less captive clientele), it also sees plenty of challenges.

Kimberly Hendren said the physical formats of some of her stores, shoehorned as they are into places whose primary focus isn’t food service, can be problematic. For instance, one hospital location has its bakery in one spot, its freezer in another, its refrigerator in a third, and the actual retail space in a fourth.

“These buildings weren’t built to sell food,” Hendren said. “They were built to heal people. So sometimes we have to be very creative with our space.”

Another is the near-omnipresent supervision from landlords—something that’s an order of magnitude greater than for the typical storefront eatery. If customers have a bad experience at, say, a hospital restaurant, they often don’t complain to the staff. They complain directly to hospital management.

“The landlords have very high expectations on what they want to see from us,” Director of Operations Brad Hoke said. “So, we’ve got to put a lot of time and energy into that relationship. A street-side restaurant might not see its landlord for three years. Ours, we see every day.”

Which is one reason Hoke spends most of his time on the road, visiting CC Holdings locations for everything from landlord meetings to in-person training sessions for store staff. He travels so much he doesn’t even have a headquarters office.

Another challenge is that CC Holdings competes against colossal companies like Aramark, which has 270,000 employees and $15.8 billion in sales.

But that doesn’t necessarily mean the giants hold an insurmountable advantage over niche players such as CC Holdings, said Barbara Castiglia, executive editor of the trade publication Modern Restaurant Management.

“You can hire a company that’s huge, but to have something more personalized, it takes a smaller company that’s very knowledgeable about the area and what works there,” Castiglia said.

Hoke characterized CC Holdings’ comparatively meager size as a strength, not a weakness, since it allows the company to be more responsive. 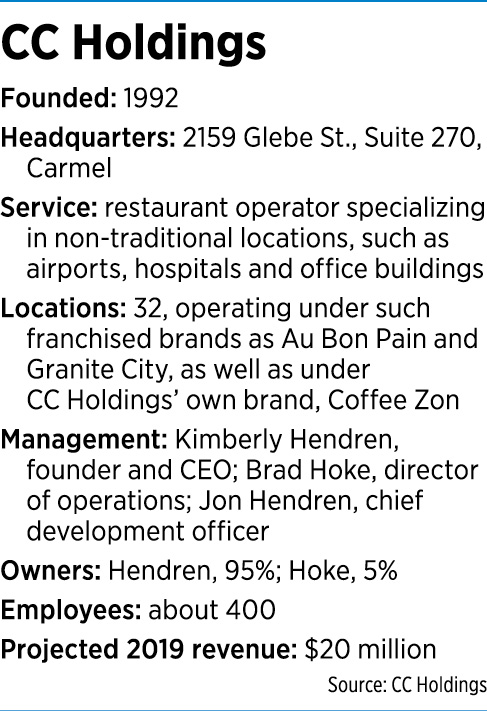 “Sometimes, the concept of having a big company take care of everything, from the coffee shop to the company cafeterias, can be appealing,” he said.

“What we emphasize is that their director of operations might be in Chicago or Miami, and he’s handling your locations here. But we’re on site in Indianapolis. If something happens, you can get me on the phone in two minutes.”

Kimberly Hendren can tell plenty of war stories about such situations. A few years ago, in the midst of a heavy snowstorm, Indiana University Health told her it didn’t have enough staff to open its cafeterias. The hospital system wanted to know whether her lobby stores could shoulder the burden.

“They asked us to stay open 24/7 and ramp up all of our businesses to feed the patients and staff,” she recalled. “We literally drove around in four-wheel drives and picked up staffers. They stayed in hospital rooms and kept their places open 24 hours.”

CC Holdings’ executive team say their company is pursuing growth opportunities, but nothing that would represent a radical departure from current strategy.

“It’s really likely to stay here in the Midwest,” Hoke said. “I’m sure we’d look at any opportunity, but do I see us in Florida or out West? Probably not. I think the Midwest has a lot of opportunities for us.”

For her part, Hendren would like to see more of the company’s outposts carry the in-house Coffee Zon name.

“I really would like our own brand to be the flagship,” she said. “We’ve been moving that way with rebranding.”

One potential market for expansion is Cleveland, where CC Holdings is discussing a partnership with a company that services hospitals.

But much of the growth likely will continue to come from responding to inquiries from landlords.

“They’re offering very financially favorable deals, so it’s hard to say no,” Hendren said. “I think our growth will be in office buildings and business parks, along with hospitals.”•