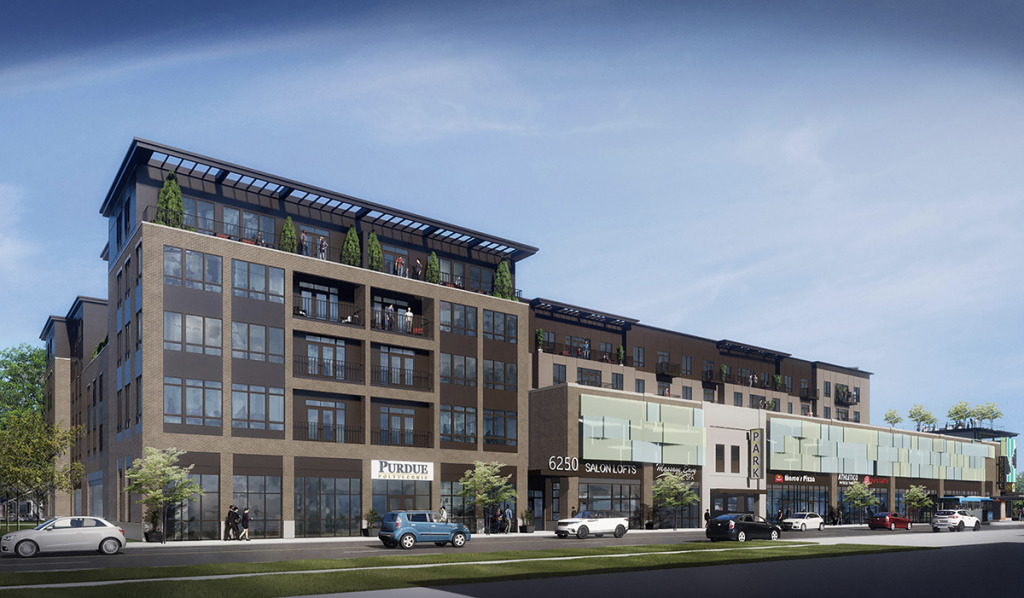 As originally planned, Keystone Group's project would add a five-story building next to the Broad Ripple parking garage, as well as new apartment units on top of the garage. The new building was to be used largely by Purdue Polytechnic High School as its campus. (Rendering courtesy of Keystone Corp. via the Broad Ripple Village Association)

Indianapolis-based developer Keystone Group is going ahead with a commercial-and-residential real estate project planned adjacent to the Broad Ripple parking garage on College Avenue, although its main tenant has dropped out.

Purdue Polytechnic High School North had committed to moving its campus to the five-story project, which was planned directly south of the Keystone-owned parking garage in the 6200 block of College Avenue.

The first three stories would be used by Purdue Polytechnic, and the top two—which also would extend over the adjacent 348-space parking structure—would contain 69 apartments.

But Purdue Polytechnic and Keystone announced Thursday morning that the high school was instead planning to stay long-term in Broad Ripple High School, about a half-mile to the east. Purdue Polytechnic began leasing space in the school this fall while waiting for the Keystone building to be constructed.

“We all were excited about a new building on College Avenue as part of Keystone’s mixed-use project. However as student demand grew for our innovative high school model, it became clear that we had outgrown the space in the new building even before it was constructed,” Scott Bess, executive director of Purdue Polytechnic, said in the announcement.

Officials with Indianapolis Public Schools have agreed to let Purdue Polytechnic remain in the BRHS building, pending approval from the IPS board of commissioners and the PPHS board of directors at their respective November meetings, according to Bess.

BRHS closed as a high school in May 2018. The school district has maintained ownership, originally in hopes of selling it for redevelopment—a plan that has been complicated by a state law that requires it first be made available to charter school operators for $1. Part of the high school currently is in use as district office space.

Jennifer Pavlik, senior vice president and chief of staff for Keystone, said the firm concurred that the demand for Purdue Polytechnic’s program was going to outstrip the available space in the new building.

“This makes sense for them to be in a location that is already a school with all the amenities for the students,” Pavlik said in the announcement. “We are glad this will work for their increased student growth and believe this is a win for their students and the community overall.”

In response to questions from IBJ, Pavlik said Keystone was redesigning the project in the 6200 block of College Avenue, which should take a few months.

The new project would essentially look the same as in the original plan. The ground floor would be reserved for retail uses and the second and third floors would be apartments. Although it’s difficult to know at this point exactly how many apartment units would be added in the space formerly set aside for the high school, Pavlik ballparked the figure at 20.

Keystone intends to start construction in early 2023 and open in 2024, she said.

The building is set for a Keystone-owned parcel that currently contains a Chase Bank branch that no longer is in operation. The branch eventually will be demolished.

The $15 million public parking garage opened in 2013 as part of a public-private partnership that included a contribution of more than $6 million from the city of Indianapolis.