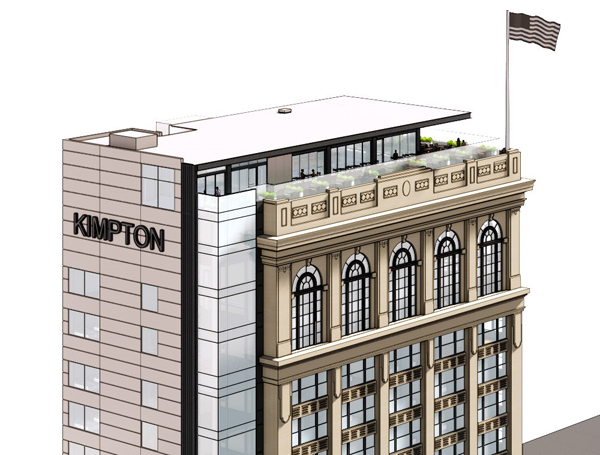 Changes to the historic building at Pennsylvania and Washington streets include a rooftop bar and an addition running down the north side of the tower. (Image courtesy of Gensler Architecture)

Construction of a ritzy hotel in one of downtown’s oldest towers is expected to start by the end of the year, now that the property’s owner has received approvals for the project from city historic preservation officials.

Local developer Loftus Robinson was given the green light by the Indianapolis Historic Preservation Commission on Aug. 7 for alterations it has proposed to the former Odd Fellows Building at 1 N. Pennsylvania St.

Loftus Robinson plans to revamp the building as a Kimpton hotel. The project will include a striking addition, heavily accented with glass, on the north side of the neo-classical building.

Kimpton Hotels & Restaurants, headquartered in San Francisco, operates more than 60 hotels in the United States, Europe and the Caribbean. The swanky, upscale brand, which opened its first property in 1981, touts itself as the “industry pioneer” of boutique hotels.

Work on the project—which has been delayed several months amid a dispute between the development company and street-level tenant Centier Bank—is tentatively scheduled for completion in early 2021.

“We’re currently working closely with our design team to finalize drawings and coordinate for construction,” said Drew Loftus, president of Loftus Robinson. “We anticipate starting selective demolition and construction yet this year.”

The 16-story tower was built in 1908 and at the time was one of the tallest buildings in the state.

The Kimpton project was first announced in December 2017—about eight months after Loftus Robinson bought the 82,565-square-foot building with plans to renovate it. At that time, Kimpton said it wanted to turn the building into a 130-room hotel.

Original plans for the hotel called for a signature restaurant, a rooftop lounge area and 5,000 square feet of meeting space. Those remain elements of the current plan.

During its August meeting, the IHPC approved several proposed alterations to the building. Among them were the creation of the rooftop bar—a 5,000-square-foot, indoor-outdoor venue that can accommodate up to 150 people—and the addition to the north side of the property that runs the length of the building.

The addition will create 34 additional guest rooms for the hotel, which will have a total of 164 rooms. To build the addition, Loftus plans to buy the adjacent three-story building at 15 N. Pennsylvania St. that until recently had housed Jack’s Pizza.

Most of the circa 1923 property is expected to be torn down—except for the front facade, which will be preserved—to make room for the Odd Fellows addition.

“We took into account feedback from the first IHPC hearing, such as overall height of the rooftop addition and its setback,” said Jack Paruta, a project architect in the Morristown, New Jersey-based office of Gensler Architecture. “The façade of [the property] became a bit more simplified, and the canopy was downsized to work proportionately as well.”

The first floor of the hotel will include a 2,200-square-foot lobby and a signature restaurant fronting East Washington Street. The restaurant will have 120 indoor seats and 40 outdoor seats, adjacent to the Cultural Trail.

The approvals from the IHPC come several months after Loftus Robinson struck a deal with Centier Bank to vacate the building. It’s expected to move to the former Ball State Indianapolis Center space at 50 S. Meridian Street in September.

Drew Loftus and a representative of Centier Bank said that their legal dispute—which stretches back to at least November 2018—has been resolved.