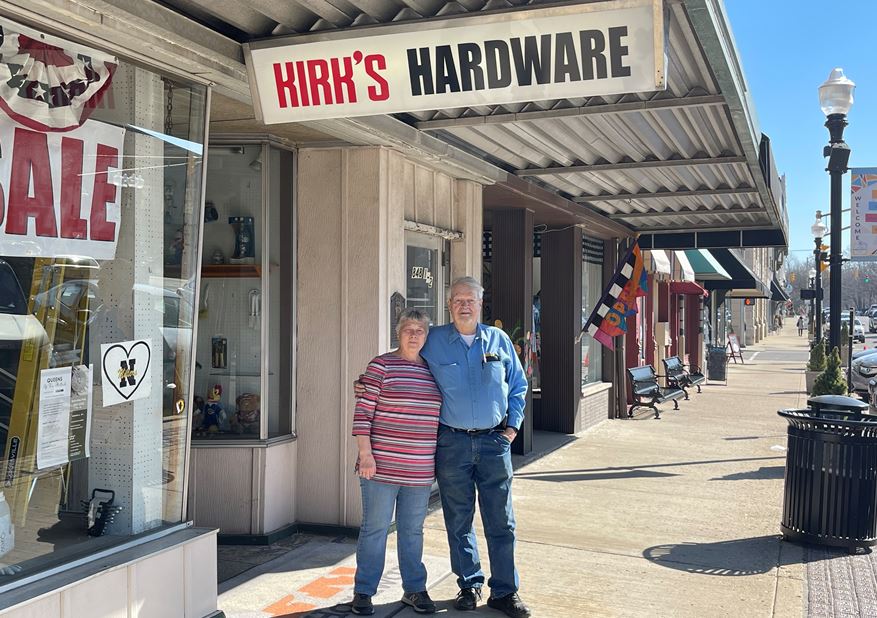 The old slogan at the hardware store across from the Hamilton County Courthouse used to say, “If you can’t find it, go to Kirk’s.” People in Noblesville will have to go somewhere else after March 31.

Kirk’s Hardware, owned by Bill and Carrie Prater since 2002, is set to close at the end of the month. The 133-year-old, six-floor building that houses the business at 848 Logan St. has always had a hardware store as a ground-floor occupant.

The original owners sold potbelly stoves and repaired buggies in the back. The store went by the names Griffin Brothers, Sharpe Hardware and S.E. Hardy & Co. before becoming Kirk’s Hardware in the early 1950s after Roy Kirk bought the business. Kirk later sold the business to David and Jane Kingsolver, who hired Prater to work in the store in the early 1980s.

The Praters kept the Kirk’s name after acquiring the store from the Kingsolver family, who maintained ownership of the building.

Now, change is coming as the Praters said they could not find a buyer they trusted to run the business. So, after the building was sold by the Kingsolver family in November for more than $1 million, the couple decided it was time to go.

“Nobody seemed like they wanted to continue a hardware store, so we made the decision if nobody’s going to take it over, we’ll just call it quits and lock the door and go home,” Bill Prater, 71, said.

Over the years, Bill repaired screens and windows in the back while Carrie handled the cash register and paperwork in the front. Now, they’re ready to “start chasing grandkids.”

“Yeah, we finally made a decision, so that’s it,” Bill said. “Everybody’s wishing us luck in retirement. When they say, ‘what are you going to do in your free time?’ I said, ‘we have five grandsons and baseball season is starting.’”

The store has not provided the Praters much free time over the years. Kirk’s is open six days a week, and after guessing at some dates, the couple who has been married 51 years said they haven’t taken a vacation since the late 1990s.

Carrie agreed and noted the memories and relationships the couple built over the years.

“The enjoyment of the grandkids coming in and climbing on the ladders,” she said. “And then all the friends we’ve made through here.”

Customers can go to big box stores for their hardware needs, but Bill said he takes pride in doing what the larger competition doesn’t do.

“We’re more service-oriented,” he said. “You need a screen fix or repair? Bring it to me. I’ll fix it.”

The shelves of items that include everything from work tools to antique lamps will be sold in an online auction after the store closes for the final time. The Praters are preparing for their final day at work, but they still help customers find what they need.

“It’s going to be bittersweet, I guess, that last day I go out,” Bill said.

In three weeks, Bill Prater will no longer repair broken screens or windows at his worktable at Kirk’s. He isn’t finished fixing what needs to be fixed, though.

After all, the sign behind his table says, “If it ain’t broke, don’t fix it. But if it is broke, take it to Papaw.”