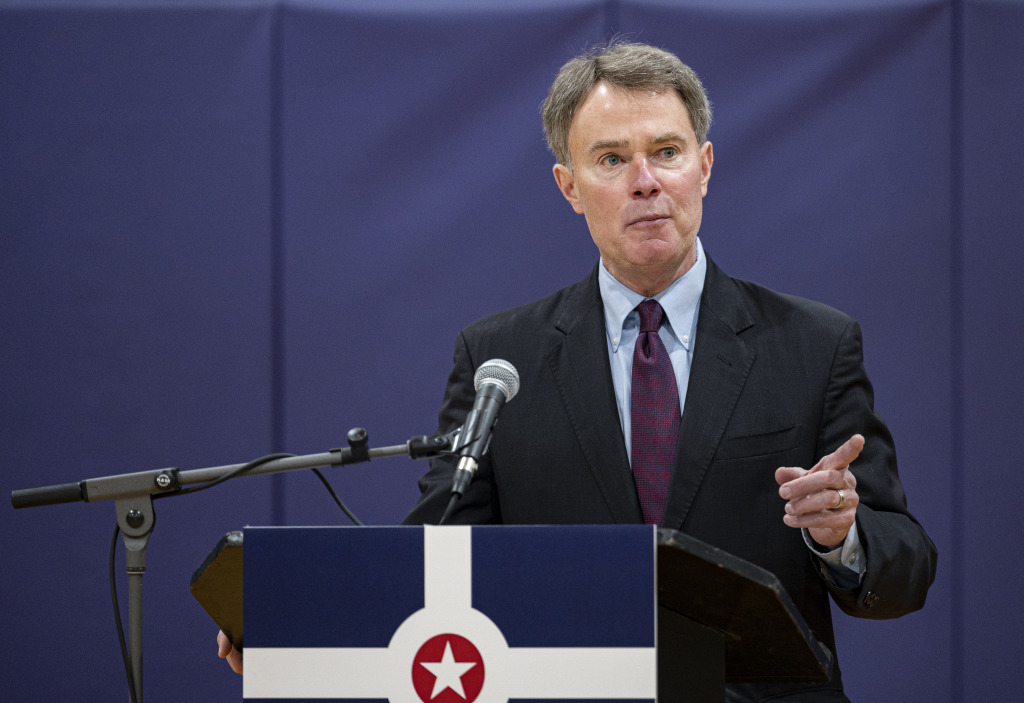 The budget proposal, which totals $1.462 billion, is about $100 million larger than this year’s budget and includes spending the remainder of available federal and local COVID-19 recovery funds. If the council passes the proposed budget, about $226 million will be allocated to address problems caused by the COVID-19 pandemic.

“The last three years have been tough for our country, our state, and our city,” Hogsett said in written remarks. “But we’ve worked hard to keep our eyes on what matters most: Fighting gun violence, rebuilding our streets and roads, growing our local economy, improving student achievement.”

Due to record inflation and increased assessed values, Hogsett said he was proposing a 2023 property-tax credit for more than 90% of Marion County homeowners. The $27 million cost of the proposal would be paid with federal pandemic relief funds.

A large budget priority is the hiring of Indianapolis Metropolitan Police Department officers. The base salary for first year officers would increase to $61,829 plus a $10,000 sign-on bonus. The department would also spend $200,000 in marketing and branding in order to attract new hires.

As part of the five-year capital plan ending in 2026, $40 million is budgeted in 2023 for roadway improvements. Residential streets would receive $25 million, while the remaining $15 million would be for thoroughfares. The residential streets are in each council district, Hogsett said.

IMPD and the Indianapolis Fire Department make up over half the 2023 budget appropriations, with the Department of Public Works in third at 22%.

The five-year plan includes nearly $1.2 billion toward infrastructure. Transportation, including streets and bridges, would receive $849 million. Stormwater projects would be allocated $309 million.

As part of the infrastructure plan, the Department of Public Works will create a new, dedicated trails and greenways unit and hire a traffic engineer to review fatal crashes. After IMPD reviews a fatal crash, the engineer will review road design as part of the Safe Streets initiative.

For education, funding would be allocated toward Indy Achieves Completion Grants, which pay bursar bills to allow college attendees to finish their schooling. The $500,000 expansion would allow for 200 additional completion grants.

The city would also create the Circle City Readers Program, a $1 million investment to provide tutors for Marion County students in kindergarten through third grade.

In 2023, Hogsett said he plans to fulfill a promise made in March to establish a 24-hour clinician-led response team. The non-law enforcement group will respond to mental health and substance use disorder emergencies. The city would allocate $2 million toward hiring the professionals.

Budget meetings for individual departments are expected to occur for about two months, with the City-County Council taking a final vote on the budget in mid-October.

Correction: This story has been corrected to accurately reflect the amount of the proposed property tax credits for homes with certain assessed values.