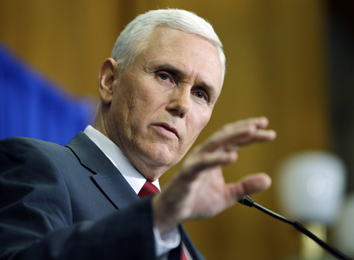 A spokesman for former Vice President Mike Pence’s campaign denied reports on Monday that the Republican had filed to run for president in 2024, responding to an apparent hoax after screenshots of a Federal Election Commission posting began to circulate.

“Former Vice President Mike Pence did not file to run for President today,” Devin O’Malley wrote on Twitter. When reached for comment Monday, O’Malley confirmed his tweet and added, “You’ll have to reach out to the FEC for answers about the filing.”

The report came as Republicans have made efforts toward running in the primary election against former president Donald Trump. Pence, a former Indiana governor who served as Trump’s vice president between 2017 and 2021, had planned to use the holidays in Indianapolis to consider a presidential campaign, an aide told The Washington Post last week.

The FEC filing Monday was under “Mike Richard Pence” and included a post office box address from Anderson. Pence’s full first name is “Michael,” but his campaign has appeared to use the listed address in the past. Screenshots circulated across the internet Monday as people reacted to Pence’s possible candidacy.

Since refusing to try to overturn Trump’s 2020 election loss, Pence, 63, has feuded with Trump and his supporters. Pence has recently hired fundraising aides but plans to continue his book tour in January for his autobiography, “So Help Me God,” an aide told The Post last week.