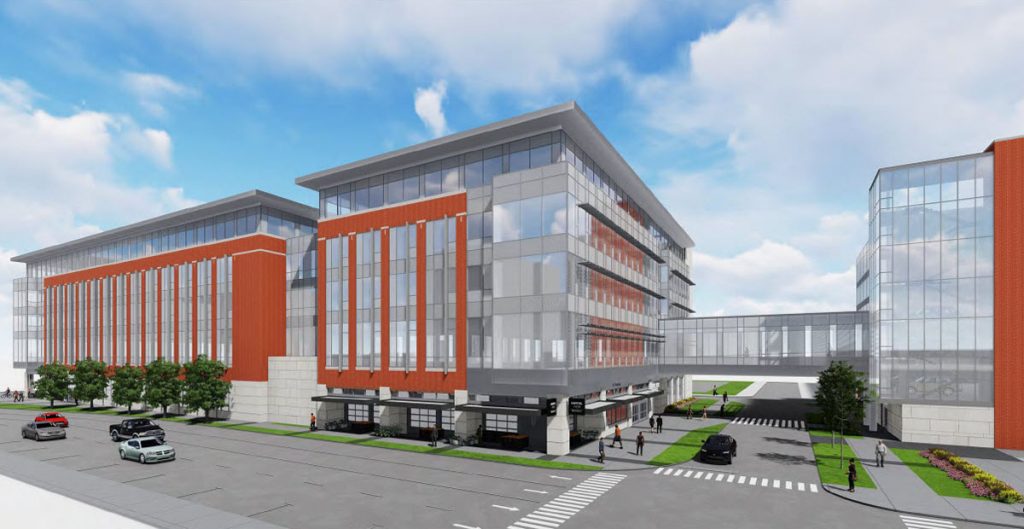 The project calls for a 250,000-square-foot office building north of 15th Street and a seven-level parking garage to the south, connected by a skybridge. (Image courtesy of the city of Indianapolis)

A two-block downtown office-and-parking project planned southeast of Methodist Hospital is moving forward, after the group that owns the property received city approval for a new pedestrian bridge and cosmetic changes.

Fire H2O LLC—a firm comprised of executives from Shiel Sexton Co. Inc. and Gregory & Appel Insurance—is developing the complex, comprised of a five-story office building with retail space and a seven-level parking garage. It’s earmarked for 4.5 vacant acres on the east side of North Capitol Avenue between 14th and 16th streets.

Last week, the group received approval from the city’s Metropolitan Development Commission to build a covered walkway over 15th Street between the office building to the north and the 950-space parking garage to the south. The 80-foot skybridge will connect at the second floors of both buildings.

The city’s Regional Center Hearing Examiner approved the plans Sept. 10, along with design changes to the office building, before the MDC gave its stamp of approval on Wednesday.

Under current plans for the property, the office building would be about 250,000 square feet and include a grocery store on the ground floor, fronting Capitol. The principals behind Fire H2O have declined to share which grocer they plan to have occupy the space, and whether a lease has been signed.

The pedestrian connector, which will be built out of steel and glass, was not in initial plans for the development submitted to the city in February 2018.

In fact, Fire H2O had hoped to complete the project by August of this year, but the development was delayed.

Public records do not indicate construction permits have been pulled for the project, but a right-of-way excavation permit was issued for utility work on Friday.

In addition to the skybridge, the owners also requested a change to the elevations of the office and retail building, asking to increase the height of the second floor by four feet.

The change was needed to lease the space to an unidentified tenant, which required additional ceiling height as part of its agreement, according to city filings. The second floor will also include a conference room.

Fire H2O also requested to make changes to part of the building’s facade, adding more windows and seeking to use limestone instead of brick on parts of the  exterior. The changes required the firm to go back to the city for approval.

Richard Hennessey, a principal with Fire H2O and executive vice president at Shiel Sexton, declined to comment when reached by IBJ.

Progress on the project comes after an unsuccessful effort to revitalize the site—currently a mix of green space and surface parking—by Fire H2O eight years ago.

In 2011, Indiana University Health canceled plans for a $73 million administrative office building in favor of buying an existing tower at 10th and Illinois streets amid the economic downturn. The development was also led by Fire H2O, with IU planning to serve as the the primary tenant.

In late 2018, Hennessey told IBJ the project was delayed while IU Health finalized its master plan for the Methodist Hospital campus. That plan has not yet been revealed, but the office project appears to be moving forward.

Hennessey and other partners in the development have declined to share how much they plan to spend on the project.

It’s unclear when construction on the project is expected to begin on the site, and what the new target completion date is.