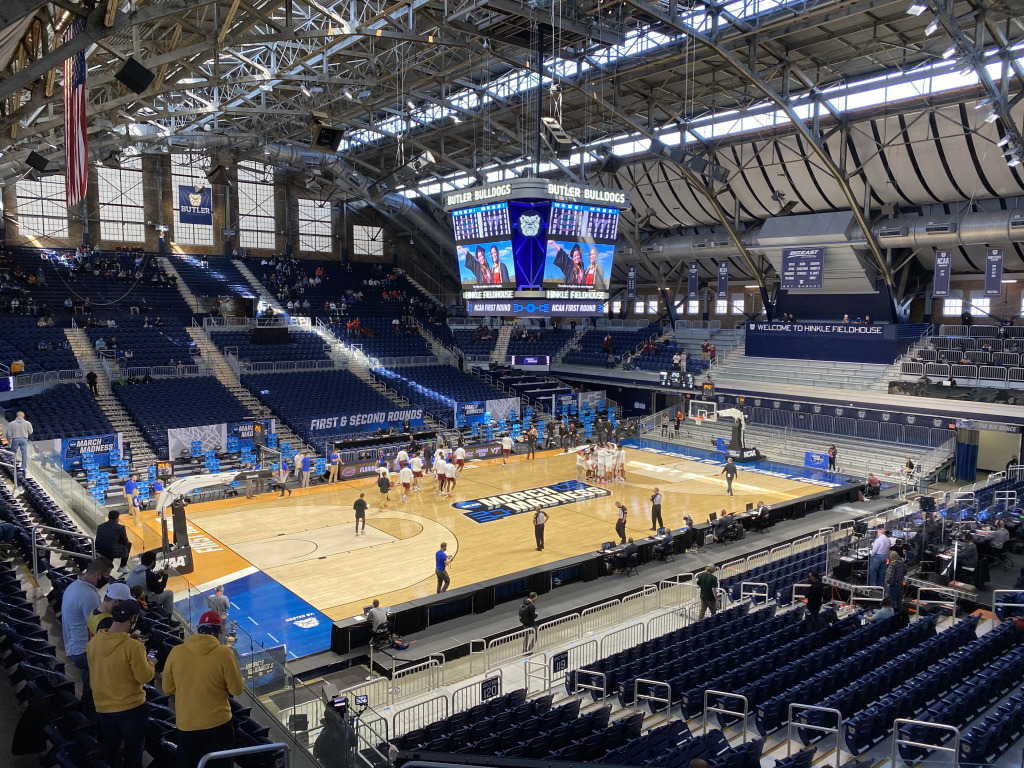 The venerable brick building with the arched roof and clerestory windows was already a cathedral of basketball long before Norman Dale pulled out a tape measure to check the height of a rim and Jimmy Chitwood took three dribbles before knocking down the winning jump shot.

“Hoosiers” made Hinkle Fieldhouse famous by Hollywood standards, but in the college basketball world, the home court for Butler University basketball was already a star.

And when the NCAA announced it would hold the men’s basketball tournament entirely in the Indianapolis area, there was no doubt Hinkle would get another turn in the spotlight and host NCAA games for the first time since 1940.

“It means something to me because I love basketball. I love the history of basketball. I’ve got great respect for what basketball means to the state of Indiana,” said Colorado coach Tad Boyle, whose fifth-seeded Buffaloes will face No. 12 seed Georgetown at Hinkle on Saturday.

The NCAA and its broadcast partners seem to understand the significance of returning tournament games to Hinkle for the first time in 81 years. The first of the 32 first-round games to tip off on Friday will be seventh-seeded Florida against 10th-seeded Virginia Tech inside the nearly 100-year-old building at 12:15 p.m. CBS assigned its No. 1 broadcast crew of Jim Nantz, Grant Hill, Bill Raftery and Tracy Wolfson to call the first day of games inside the building.

“I’ve never been in there, and I’ve been in the Midwest my whole life so this will be my first trip there,” said San Diego State coach Brian Dutcher, who grew up in Minnesota, where his father, Jim, coached the Golden Gophers for 11 seasons “We’re all looking forward to it, getting in there and testing those rims out and seeing how soft they are and hopefully they’re really soft for us when we take a few jump shots.”

While there are dozens of famous, historic college hoops venues still in use, the pantheon seems to be Allen Fieldhouse, The Palestra, Cameron Indoor Stadium and Hinkle.

For the first 20-plus years of its existence, Hinkle was the largest basketball arena in the country. It’s been called the cathedral of Hoosier hoops hysteria, the brick exterior, the arched steel-truss roofline and the large windows at its apex allowing the outside light to shine on the past history written on the court below.

Coaches whose teams are playing there in the first round are thrilled, whether it’s from knowing the history of the building or the nostalgia attached to its role in the movie.

“I’m 58 years old, 35 years in coaching, I’ve been a lot of places. I’ve never been to Butler’s campus, needless to say I’ve never been to Hinkle,” Virginia Tech coach Mike Young said. “What a mountaintop experience to be able to compete in that building.”

And for the players?

“I know Butler plays there. That’s it,” said Syracuse senior Marek Dolezaj, a native of Slovakia.

“Hoosiers,” after all, was released nearly 35 years ago, the story of fictional Hickory High School capping its unlikely run to a state championship by beating mighty South Bend Central to win the 1952 Indiana state title at Hinkle.

In reality, the fictional story of Hickory was based on the true story of Milan High School, the 1954 state champions who beat Muncie Central on Bobby Plump’s jumper for the title back when any team could win Indiana’s glorious single-class tournament (that format ended in 1997). And yes, it was played at Hinkle.

Does a movie based on events of nearly 70 years ago resonate with today’s players? Have they even seen it?

“Based on what I think they watch, based on that my guess would be probably about one or two (have),” said Alabama coach Nate Oats.

Added Young: “I guarantee that two-thirds have no idea what the movie was about or have heard of it.”

While Hinkle Fieldhouse only allowed roughly 1,500 people to attend games this season—it will be slightly less during the the tournament—one of those was Sally Wirthwein. She grew up in an Indianapolis suburb, started attending games as a Butler student and never really left.

Naturally, the fieldhouse’s unofficial historian was thrilled to be at every home game this season.

“During a time where very little felt normal or as expected, I wanted to pinch myself every time I was in the building,” Wirthwein said. “Hearing the Butler War Song, watching the players on the court, competing doing what they love to do, it was really special. I will never take that for granted ever again. It was great. Will it be greater even next season when hopefully Hinkle is filled to the rafters again? That will be tremendous.”

Hinkle will host games through the Sweet 16, but those assigned to play there in the first round understand the significance. The last NCAA game played inside the building was Indiana’s 39-30 win over Duquesne on March 23, 1940, en route to IU’s first NCAA basketball championship.

“That’s what is great about playing in these kind of tournaments in different venues is you get a chance to learn,” Boyle said. “I remember the first time I played in Madison Square Garden as a player how special that was to me and Hinkle Fieldhouse is pretty special as well.”