Home » NCAA Tournament is so much more than wins and losses 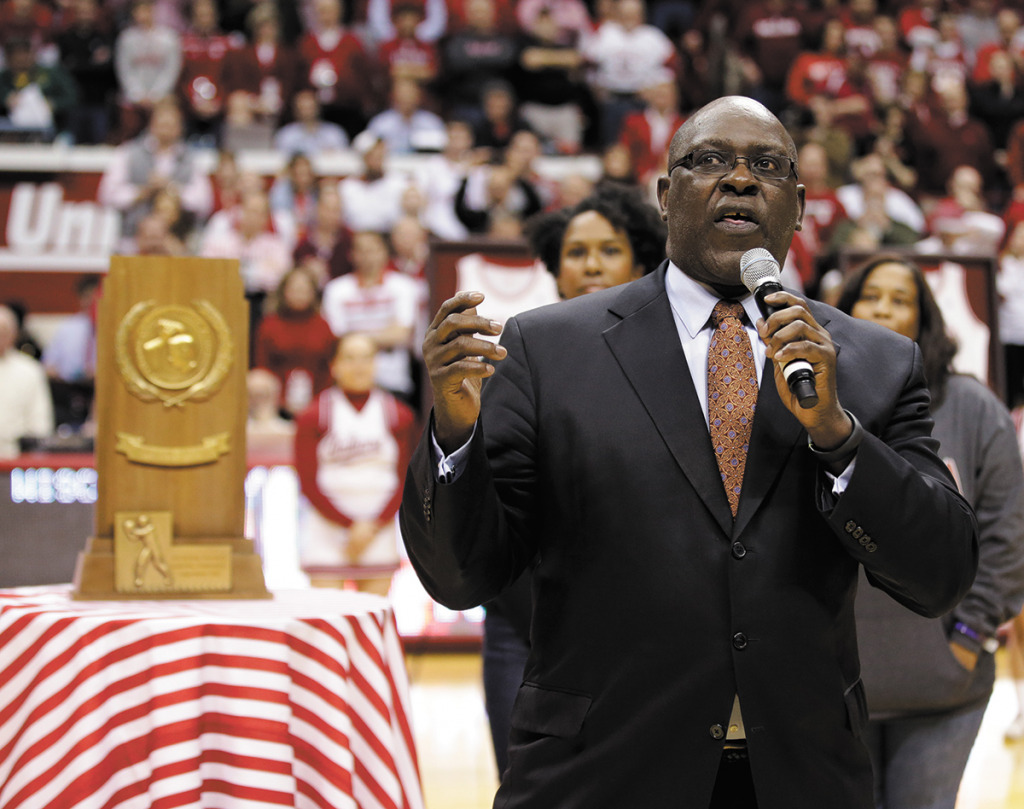 Buckner speaks during halftime of a game between Indiana and Wisconsin in 2016. (AP photos)

Why did you take on this role to help coordinate this year’s tournament for the city?

My dad’s been gone many years, but I’m sure he’d say, “Son, I’d have never thought you’d be doing something like this.”

I think it’s an honor. They’ve made the tournament so much bigger, and it reaches so many more people across the country, and the world. College basketball, and these kids, really, are having an experience that will affect them for the rest of their lives—not all of them have to be players. You can have student managers, anybody involved. People who were managers and trainers [tell me] about the times that they had in the tournament.

It has a much bigger effect than just the wins and losses of the game; losing is obviously difficult, but the fact that you can say that you were in the tournament—there’s so few people who have actually done that in their lives.

What are your responsibilities as co-chair?

In your mind, how does this compare to events of the past, like past Final Fours, the Pan Am Games, the Super Bowl? Certainly, it’s different from those events for a number of reasons, but do you see parallels to the other major events the city has hosted over the years?

This is unique, because we’re in the COVID era. But because we have been able to have success doing those [past events], it gives us the confidence that we can make this happen. We know that you’ll have the leadership to do it. There’s so many people that have to come together to do this.

Indiana does that well. There are a lot of cities that want to do this, but they can’t get it done because either the local committees can’t do it [or] they can’t get the cooperation among some of the governmental aspects. When you talk about that body of experience [for Indianapolis], it makes this doable. It gives you an experience base that you can tap into, to pull things together.

Fans will be allowed in some capacity throughout this year’s tournament. As a former student-athlete yourself, how important is it to have that fan component during the tournament, especially in a year in which some teams may not have had any fans at their regular-season games?

I think once it’s viewed in hindsight, many people will enjoy the fact that we had it, because you’ve got to remember part of the experience for so many of these young people is, they didn’t have [the tournament] last year. Now they get a chance to experience it.

I don’t ever want to downgrade what fans bring to the environment, to the arenas—that’s something that is substantial. But given we’re in an unprecedented time, we have to take what’s available to get family members there.

But having fans? Yeah, we’d all like to have many more fans at the events because it does add to [the atmosphere]. But given the scenario, that can’t be done. We’re at that point where we’re saying, “OK, can we have it? We didn’t have it last year but now we can—we just won’t have as many fans there.” That’s just what we all have to come to grips with.

What are your thoughts about opposition to the event occurring, or fans being there, because we are still in the midst of a pandemic?

I respect their opinion, and I think they have every right to feel that way. But I can tell you that everything humanly possible has been done to make sure this is safe and healthy. We would do that, of course, at any time, but it’s certainly being done now.

What do you remember most fondly from IU’s 1976 undefeated season, which concluded with the national championship?

My fondest memory was standing on the podium when they gave us the trophy. I was on the stage with my teammates and looking at the face of Coach [Bob] Knight. Given the success that we had, that look on his face was pure joy.

Looking at that picture probably 25 years ago, I would have said it was the joy of having won the championship, to some degree. What I think of it now is that, looking at his face, that’s the joy of someone watching his kids achieve a goal that they never thought they could achieve and their enjoyment of that moment.

I think that’s really important because, when coaches are part of that process, the joy you see is the joy that [the players are] able to do something together. He worked very, very hard to accomplish that title, so to see him accomplish it and enjoy that accomplishment, there are no better moments for me.

Several venues are going to be used for the tournament. Is there one in particular that you’re most excited about having an opportunity to be on the national stage in this way?

You would obviously think I would say Simon Skjodt Assembly Hall, but that one carries its own weight. Really, you can look at all of these and say that it would be special for each of them. I think that speaks to the specialness of the state of Indiana. It highlights that Indiana has these great facilities—they all have a history that will be part of a national platform.

Obviously, IU has had a bit of a struggle this year. But there are a couple of Indiana teams that could make a final push. How important is it to have Indiana teams in this Indiana tournament?

Well, I want success for all schools. I understand what sports does: It brings people together and it gives [prestige] to the respective schools. Having schools from Indiana is important, but they have to earn it just like everybody else.

At the end of the day, that’s the thing about sports. It is more of a meritocracy than probably a lot of other things you’ll ever participate in. You play if you are the best player; you win if your team is the best team. So, you have to earn your way into that process.•