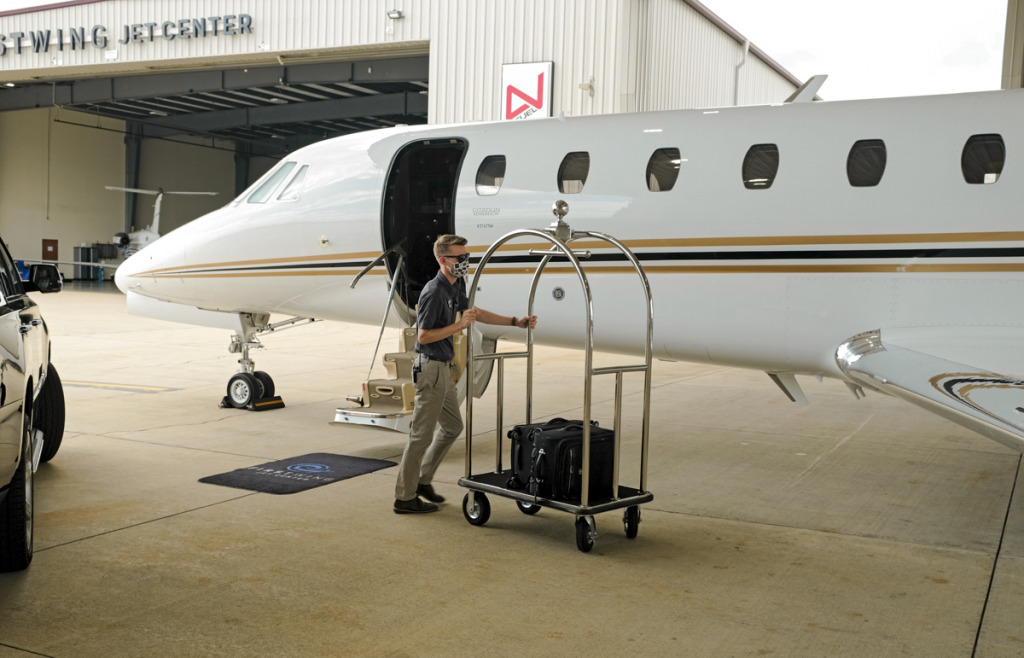 First Wing Charter and Management, which has operations at three area airports, including Indianapolis Executive Airport in Zionsville, watched business crater in April. But First Wing had a record month in June, with its hours flown up 40% from a year earlier. July was even better, and August was strong as well. (IBJ photo/Eric Learned)

After a sharp initial drop-off in business due to the pandemic, charter aviation has bounced back big time—also because of the pandemic.

Driven largely by health concerns, a segment of travelers who might otherwise have flown commercially have shifted to charter flights, creating a business opportunity for charter operators both locally and nationwide.

“There’s a lot of charter companies that are up 30%, 40%, 50%, at least,” said Daniel Baker, CEO of the Houston-based flight tracking and data company FlightAware. “The recovery of business aviation in general has been incredible.”

And the charter companies are optimistic that the new customers will stick around once the pandemic recedes, though industry observers aren’t so sure.

In the industry, business aviation refers to non-airline and non-cargo flights for a business purpose. That purpose includes everything from a charter company that takes passengers to vacation spots to a company-owned jet that ferries executives to corporate meetings.

Though corporate travel is still down significantly, Baker said, personal travel is way up, with the net effect that business aviation overall has recovered much more strongly than commercial aviation has. 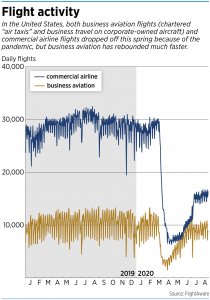 Charter flights are considerably more expensive than commercial airline flights, but they also avoid some customer concerns in the time of COVID-19: security checkpoints, connecting flights at big hub airports and planes filled with strangers.

“When you fly privately, you … interact with hardly anybody at all,” said Ryan Maxfield, chief revenue officer at Greenfield-based Aero Management Group. Aero offers charter service through its partner, Jet Access Aviation.

Maxfield said the firm’s activity bottomed out around Mother’s Day, with flights down about 85% from normal. But since then, “We’ve seen a very quick rebound, almost a ‘V’ out of this bottom.” Right now, business is down only about 20%.

Some of Jet Access’ aircraft are large jets that seat 12 to 16 passengers. That segment has not rebounded as quickly as smaller aircraft, Maxfield said, which is one reason Jet Access’ business is still down from a year ago.

Maxfield said the company expects to be back to normal activity levels, or close to it, by year’s end.

Other local charter operators have even experienced significant year-over-year increases.

First Wing Charter and Management, which has operations at Eagle Creek Airpark in Indianapolis, Indianapolis Executive Airport in Zionsville and Frankfort Municipal Airport, has seen business come roaring back after hitting a low in April.

Based on the number of hours flown, First Wing had a record month in June, up 40% from a year earlier. July was even better, and August was strong as well.

Business travel is still depressed, but Yergler said personal travel has more than made up for it—people traveling for vacation, shuttling between their residences or flying older relatives in for visits. And many of these leisure travelers are new to charter aviation.

“This [pandemic] has exposed more first-time [charter] fliers that have always had the wherewithal to be able to charter an airplane, but for whatever reason, they chose not to,” Yergler said. “Now, they’re coming out of the woodwork.”

First Wing offers charter air service both on the five planes it owns and on a larger group of planes it manages. In the private-aviation industry, some owners choose to put their aircraft under management, which means they can offset the cost of owning a plane by making it available to third parties for a fee.

First Wing charges $2,500 to $4,500 per hour, depending on the size of the plane. Those fees are per flight; a party of four pays the same as a solo passenger.

Under Jet Linx’s business models, customers must sign up as members before they can fly. Members pay a one-time fee of $10,000 or more, and flight costs range from $4,000 per hour for smaller aircraft to more than $10,000 per hour for a 25-passenger jet.

During the first six to eight weeks of the pandemic, flight activity dropped 80% to 90%, said Brad Frawley, base president and ambassador of Jet Linx’s Indianapolis operations. But things improved after that, and flight activity from June through August was up about 50% to 60% over budget expectations.

“We’re kind of crazy-busy based on demand for our members,” Frawley said.

The increase, he said, is coming both from existing members who hadn’t flown recently and from new members.

Over the past few months, membership sales “are double what they would normally be,” Frawley said.

The vast majority of those new customers have opted for one-year memberships over the other option, a 90-day membership. This, he said, suggests that new members plan to keep flying charter even after the pandemic eases. “I feel like they’re all long-term players.”

First Wing’s Yergler is also optimistic, noting that several of the company’s new customers have already returned for additional trips. “I think they’re going to be here to stay.”

Outside observers offer a different take.

“It’s a short-time blip,” said Mike Boyd, president and co-founder of the Colorado-based aviation consulting firm Boyd Group International. “I don’t think it will be a permanent thing.”

Boyd said commercial airline travel is safer than visiting a grocery store right now because airlines and airports are so vigilant about sanitization protocols.

But passengers’ misplaced fears are keeping them away from airline travel, he said, as are what he called “ad hoc” restrictions and quarantines that some states are imposing on travelers.

Over time, Boyd said, many charter aviation passengers will likely switch back to the airlines—in part because it’s less expensive.

“When [today’s] uncertainty goes away,” he said, “they’ll be back sitting in the coach cabin at American Airlines.”

FlightAware’s Baker offered a similar view. “I think there’s a lot of folks that will go back to airlines.”

However, Baker said he also believes the pandemic will create a long-lasting shift in travel patterns, potentially affecting both airlines and charter operators.

For reasons related to both COVID-19 and to immigration issues, Baker said, international travel is down even more than domestic travel. He expects that slump to continue for the foreseeable future, pushing travelers to destinations that are closer to home. “I think we’re going to see, at least for a few years, a change in where people want to go.”•