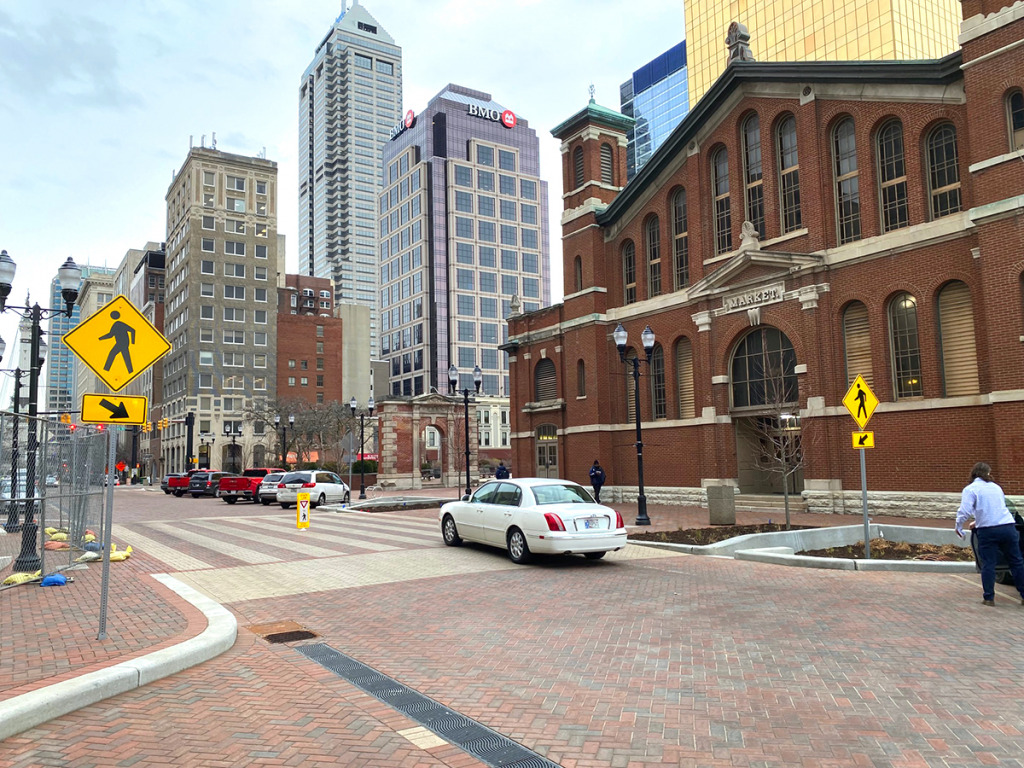 The $8 million reconstruction of the Market Street block included a raised portion of roadway leading to the entrance of the City Market. (IBJ photo/Mason King)

A stretch of city street outside the Indianapolis City Market reopened Friday after an $8 million-plus reconstruction project that resulted in a street closure that lasted a year-and-a-half.

“I know some people’s patience has worn thin,” said Mayor Joe Hogsett at a news conference Friday. “But on days like today, we see what patience looks like: transformation, and a better and more accessible downtown.”

The announcement was greeted with relief from City Market leaders, who’ve lost operating revenue and several merchant-tenants to the construction on East Market Street between Delaware and Alabama streets, as well as to the pandemic-era loss of office worker clientele.

“Thanks to our stalwart tenants, who really endured a tough couple of years with everything that’s happened,” said City Market board member Greg Henneke. “Thanks for hanging with us, and we look forward to a bright future.”

That future involves more investment in the City Market.

The city is planning to cover the market’s $90,000 budget shortfall in 2021 with a grant or a loan, plus spend an initial $5 million for renovations of the east wing.

The East Market Street project consisted of street improvements, plus a raised pedestrian crossing between the City-County Building and the City Market; curb bump-outs to condense motorized traffic; visitor drop-off spaces; added bike parking; and a new pedestrian promenade and veranda in front of the Market Street entrance of the City-County Building.