Home » Potential transformation of City Market could cost up to $35M, report says 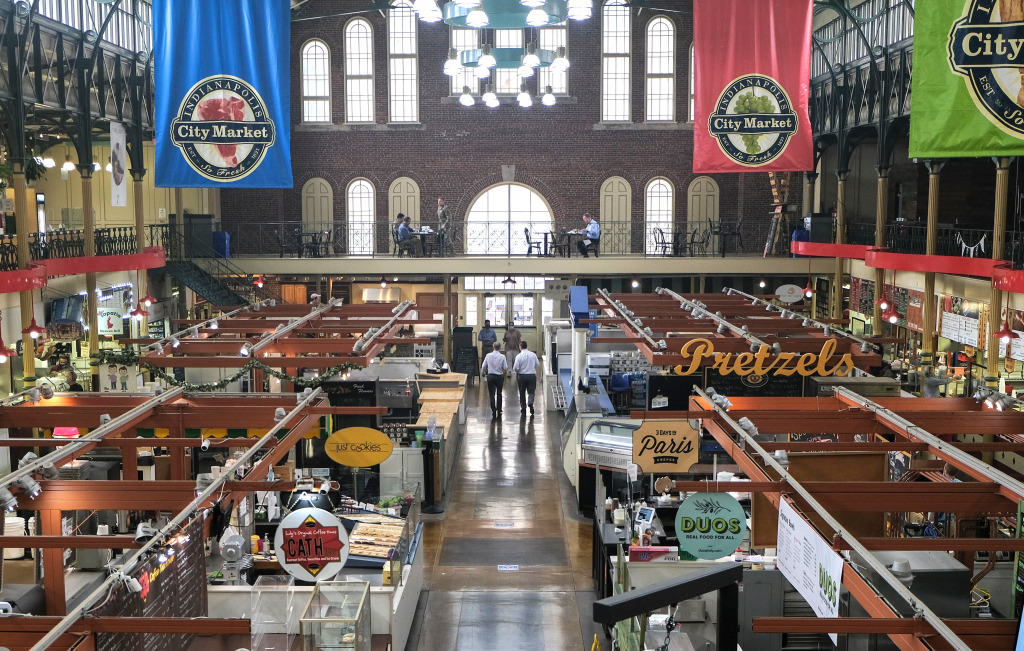 A full-scale transformation of Indianapolis City Market into a combined food hall, test kitchen and active-lifestyle hub could cost $22.1 million to $34.5 million, according to a newly released, long-anticipated study of the city-owned facility.

City officials presented the results of the 209-page report on potential options for redevelopment at a City Market special board meeting Thursday, along with concrete plans for an initial $5 million in maintenance and basic improvements.

In March, Indianapolis contracted CORE Planning Strategies, now part of New York-based consultancy J.S. Held, to do an extensive assessment of both the City Market’s condition and its possible future uses. The $222,000 contract was a package deal that included a similar study of Old City Hall.

“We really wanted to think big about what the future of the market was going to be, and assess where we are now,” Department of Metropolitan Development Director Scarlett Martin told IBJ Wednesday. “… As an anchor of the Market East District, what is the future of this site?”

The DMD handles the City Market’s $420,000 annual operational subsidy and leases the structure to the not-for-profit City Market Corporation, which manages operations.

Determining how the City Market fits into the larger Market East District has become a more pressing priority for the city in recent years, due to the pandemic and a major shift coming for the district’s workforce.

The historic marketplace has faced precipitous drops in its primary clientele—downtown office workers on lunch breaks—since the pandemic ushered in a new work-from-home era. And after the Community Justice Campus opens in the Twin Aire neighborhood in December, many of the market’s regular patrons who work in the nearby City-County building and in jobs related to criminal justice will be miles away.

J.S. Held’s assessment explores splitting the market complex into three more distinct parts, demolishing the bottom half of the two-floor “connector” hallways that lie between the market house and the add-ons.

It envisions the west wing—currently used as a co-working space with additional offices for not-for-profits—as a test kitchen and restaurant area. It would feature a new incarnation of the Tomlinson Tap Room, currently located on the mezzanine level of the market house.

The east wing would follow an “active lifestyle concept,” incorporating its existing bike commuter center, with indoor and outdoor play structures such as a climbing wall.

The market house would be revamped but continue to house vendors. The plazas in front would get makeovers, including a permanent shelter for City Market’s now-weekly farmers markets. The catacombs underneath the west plaza would get a lobby, flooring, an HVAC system and fire protection. The alley behind the market complex, East Wabash Street, would become a pedestrian-only outdoor dining hub.

City officials said J.S. Held’s proposed concepts had the potential to bring more people to the City Market, particularly families, and get them to stay longer.

“If there were a rock wall, or if there was a place where families could bring children and there was more family-friendly space, you might have people who come to the market for that, and then want to get lunch, or get coffee,” Martin said. “It’s bringing more density and purchasing power to the commercial use market itself.”

Carrying out the report’s recommended preventative maintenance and the proposed transformation could cost between $22.1 million and $34.5 million. Don’t expect to see a climbing wall at the City Market anytime soon.

“I’m probably more skeptical of some of the concepts than others,” said Indianapolis Controller Ken Clark, who also is treasurer of the City Market’s board.

Clark said Wednesday that accessibility in the food hall was “most intriguing” personally, and that the relocation of Tomlinson Taproom could help spur redevelopment of the west plaza—”especially once Market Street opens.”

Some of the more elaborate ideas, however, are likely financially “unrealistic” Clark said.

At Thursday’s special board meeting, officials announced the first phase of redevelopment: a $5 million city investment to shore up the building’s structure and make targeted renovations to restrooms and other accessibility basics. DMD plans to get the financial resolution to legislators before the end of October, Martin said Thursday.

The $5 million in repairs and improvements will likely be done in phases and in overnight sessions to keep the market open.

City officials plan to release a request for information to developers to further explore options for the east wing and plaza. Like with the city’s recent RFI for the City-County Building, this one will ask for ideas on incorporating residential redevelopment.

The goal, in addition to reinvigorating the Market East District, is to eventually get the City Market standing on its own two feet and at least breaking even.

“We hope that these investments right now, the $5 million in improvements and accessibility paired with a strategic operational plan and better utilization of the wings, will lead to that future where it’s not the city subsidizing [the City Market] on an operational basis,” Martin said.

The city has final say on what happens to the City Market, but officials said they’d work closely with the market’s governing board on a 5- to 10-year strategic plan and future work. City Market’s board is looking at firms to lead the strategic planning process, Director Keisha Gray said Thursday, although results are months away.

“We wanted to get some idea of what’s feasible in there, and get some cost basis for you all as the board to consider as you’re [developing] the strategic plan and the operational plan,” DMD Deputy Director Rusty Carr told board members Thursday.

24 thoughts on “Potential transformation of City Market could cost up to $35M, report says”