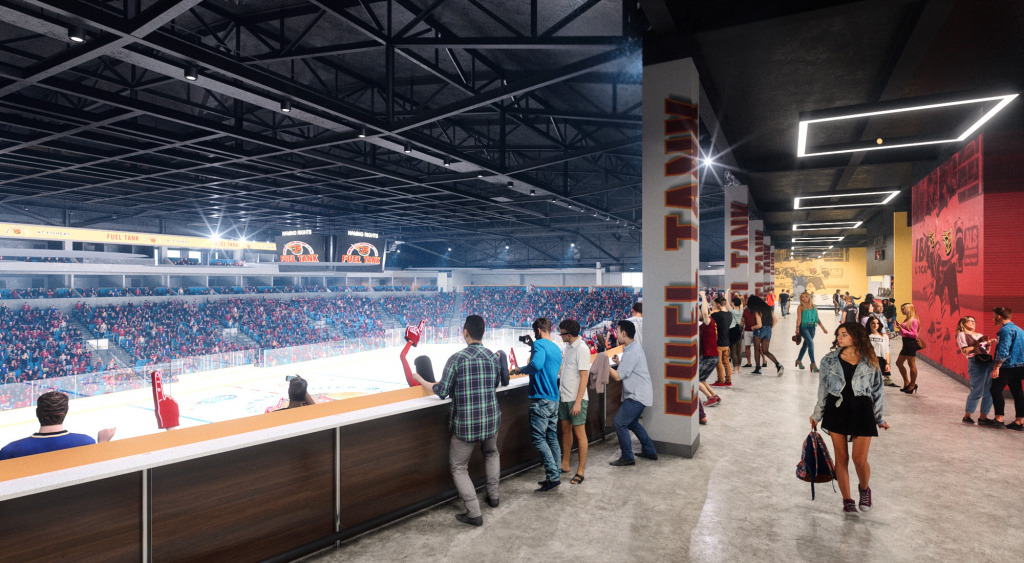 The Indy Fuel plan to begin play at an 8,500-seat event center at Fishers District in 2024-25. (Rendering courtesy city of Fishers)

The Indy Fuel minor league hockey team plans to be the anchor tenant of a new event center and expanded entertainment district in Fishers, the city announced Wednesday.

The Fuel, an affiliate of the NHL’s Chicago Blackhawks, could begin playing games at an 8,500-seat arena at Fishers District as soon as the 2024-25 season if plans come to fruition.

The event center is part of a larger $650 million expansion plan for Fishers District. The development is planned east of Interstate 69 between East 106th and East 116th streets and southeast of Ikea.

The Fuel’s home arena has been the Indiana Farmers Coliseum at the Indiana State Fairgrounds since the franchise began play in 2014-15.

Along with the Fuel, the event center would host sporting, theatrical and entertainment events.

“This announcement to expand the District into even more neighborhoods is exciting news from an entertainment perspective, but also because of the economic development to come,” Fadness said in written remarks. “This expansion not only answers the call from CEOs and employees looking for restaurants and entertainment but can now be home to our schools’ graduations and statewide sporting events.”

The Fishers District expansion is part of $1.1 billion in economic development and entertainment projects recently announced by the city.

Financing and rezoning plans for the event center will be introduced at the Fishers City Council meeting on Sept. 19. The council will also vote on economic development agreements for headquarters for Indianapolis-based Andretti Global and for a subsidiary of Italy-based Stevanato Group.

Andretti Autosport announced plans on Aug. 22 for a $200 million global headquarters. The team plans to move to the new Fishers headquarters in early 2025.

The autosports giant envisions a 575,000-square-foot facility on 90 acres on the southeast quadrant of the Indianapolis Metropolitan Airport property near East 96th Street and Hague Road. The land is near the Nickel Plate Trail and Ritchey Woods Nature Preserve.

Stevanato Group will present a proposal to the city council to update its previously announced plans for a 370,000-square-foot facility in the Fishers Life Science and Innovation Park. The company plans to invest $512 million in the project with a plan to hire 515 employees by 2031.

Stevanato Group in March entered into an agreement with the Biomedical Advanced Research and Development Authority that will expand its planned manufacturing capacity in Fishers. The company will use the facility to produce vials to be used for current and future vaccine needs.

The Stevanato facility is expected to open in early 2024.

Thompson Thrift began construction on the original Fishers District in 2018, with the help of city incentives. It began master-planning the $110 million project, originally called The Yard at Fishers District, in 2015. More than 20 houses were acquired and torn down to make way for the development.

The 18-acre property south of 116th Street just east of Interstate 69 in Fishers was sold to JVM Realty Corp. last year for an undisclosed amount.